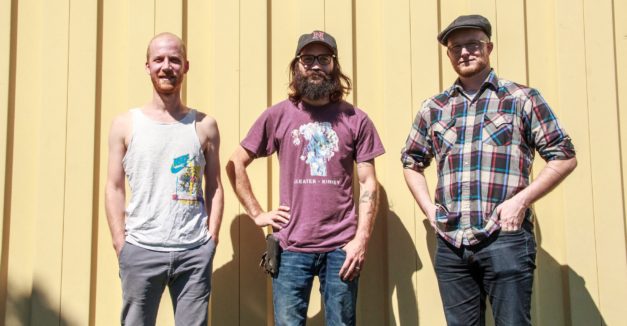 “We’re all voting for Trump. You can put that in there.”

A few days ago, I sat down with Columbia vs Challenger – a now-defunct four-man band that’s performing a reunion show on September 24 at Zipline Brewery – and that’s the first thing any of them says to me.

Joshua Miller, keyboardist and vocalist, doesn’t laugh after he says it. If you’ve never met him before, you might even think he’s serious for a minute or two, at least until you hear a little bit more about what their band was like back then.

When asked about some of their more memorable performances, Miller recounts a time that he found several pallets of unopened adult diapers in an alleyway behind Goodwill in Seward.

“We had to take them,” he says. “And a few weeks later, we were playing a huge show at Knickerbockers, and we threw them out at the crowd. At the end of the night, there were adult diapers hanging from the fans, people were wearing them. That was a memorable show.” 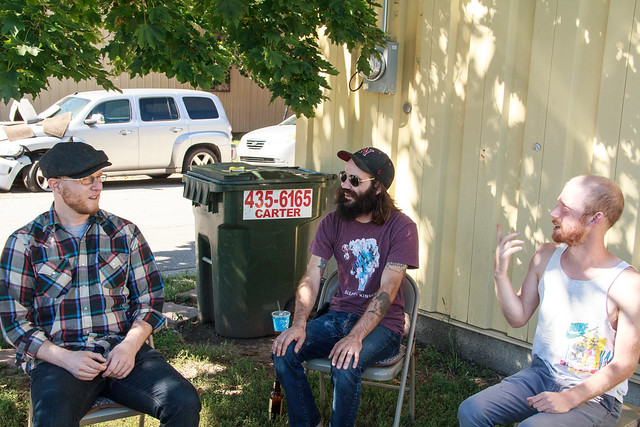 Theo Wiesehan, the band’s guitarist, goes on to describe their first album, Haywire, and you start to realize that maybe these guys aren’t Trump supporters after all. If you can tell how a person’s going to vote based on their sense of humor, that is.

“I didn’t even think about the shuttles, honestly,” Wiesehan says, after I point out that Haywire isn’t exactly the most sensitive title for an album by a band named after two space shuttle disasters. “We named it Haywire because we had a song named “Haywire,” which was about an apocalyptic event. Society is collapsing and the world is ending, but the narrator of the song is going about their own business, making grocery lists, and, y’know, ‘Why did you miss your tee time?’ while at the same time, other lyrics are talking about senators crying in their basements and the animals are screaming. It’s raining crystals.”

Although, he says, they did originally intend to include a bit more of a space motif before they eventually decided against it. Each track was going to be about a different planet: “Enjoy Neptune Responsibly.” “Don’t Mess with Mars.” “Rat Attack on Uranus.” And my personal favorite: “The Pluto Better Business Bureau.”

“The song had absolutely nothing to do with Pluto,” Wiesehan says.

Originally getting their start in Seward in 2006, the band was first made up of Miller and Wiesehan, who met at Concordia, where they both attended school and were roommates.

And then one night, after a house show in Seward, they became friends with Evan Todd.

“I went on the drums and was just messing around,” he explains. “Josh heard me, and it was a couple weeks later, he told me he’d written this song about space exploration, and he wanted to see if I wanted to play drums on it. So I went over to his place in downtown Seward, and me and Theo and Josh started playing and fit together right away.”

After that, they started playing shows all over, wherever they could. Knickerbockers, Duffy’s, Zoo Bar, but primarily Box Awesome.

“We were just really tenacious about it,” Wiesehan tells me. “Played lots of shows with hardly anyone there. Pestered venues. Played weeknights.”

It wasn’t long, though, before they started to gain some traction, which Wiesehan credits to the tight knit music community in Lincoln.

“We eventually knew all the people who worked for the different venues, we established relationships with them – Jeremy Wardlaw, Jeremy Buckley, Jeremiah Moore – and hung out with a lot of other people in bands. You see people in other bands at parties all the time.”

As Miller says, “We started meeting all of these people in Lincoln just through playing music, and that’s how we kind of made all of our friends. Playing music in some ways is a way of communicating with people, I think, especially for people who are a little bit more shy or a little bit introverted. I mean, I write stupid songs about monsters and vampires and whatever, but that’s kinda who I am and what I’m into. I’m a quirky, weird guy, and eventually it attracted these other quirky, weird people who like to dance to music and talk about philosophy and politics, comedy, music, art.” 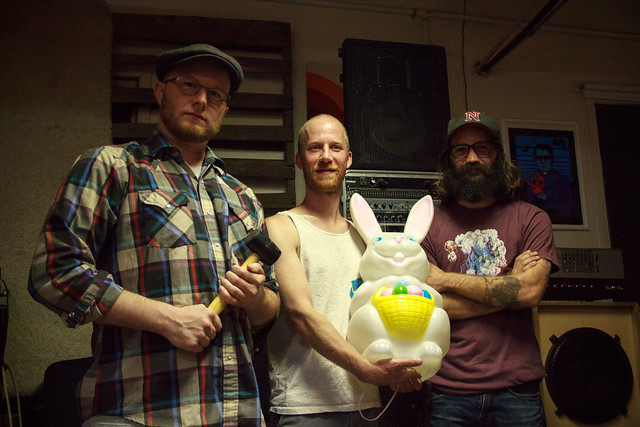 It was at that point – when they started to gain a bit of a following – that they were introduced by a mutual friend to Elliott Wegner, who had been playing around town as Manny Coon. Miller was told, “You guys are good, but you need a bass player.”

“It was like being asked out on a date,” Wegner recounts. “That’s what I remember the most. I think there was a note involved, where you guys wrote out, ‘Will you date Columbia vs Challenger?’ and I checked the box that said, ‘Yes.’

“It’s been bliss ever since.”

“Bliss ever since,” Miller adds. “And a seven-year break.”

After playing together as a complete unit for about a year or so, life got in the way. Wiesehan decided to move to Honduras, and the guys called it quits. But not before one last show at the Box Awesome.

“We had this community of people who supported us and helped us out, and they were all there, which was the coolest and most awesome thing,” Miller says. “We got our friends to make the posters, to play with us. We had comedians. We had Old Moaning Corpse spinning records between sets, so there was non-stop music. We basically got all of our friends, who had been really meaningful and supportive of us, to join us that night.

“The end of the night came, and we were about done, time-wise, and everybody was uproariously yelling, ‘No, keep playing!’ and we were friends with the sound guy – who we’d met through playing – so he let us push it, to just keep playing.”

Wiesehan similarly has nothing but fond memories of that last show.

“Everything went right,” he says. “It was like feeling possessed by the music. It was like it was channeling you. That’s the best part about playing music, and a lot of times, you forget that.”

After moving to Honduras, Wiesehan spent some time living in Texas before relocating to the Pacific Northwest, though the other three guys are still very much a part of the Nebraska music community.

Miller has multiple music projects at the moment, including Powerful Science, Green Trees, and Thirst Things First. Todd writes, sings, and plays guitar in a band called Smith’s Cloud, which is about to come out with some new music. And Wegner continues to play as Manny Coon.

So why a reunion show? It’s been seven years. The downtown music scene in Lincoln has changed quite a bit. Even the two main venues mentioned in our discussion – Box Awesome and Knickerbockers – don’t exist anymore.

The guys remained friends in the interim years, and they say they’ve always mulled it over in the backs of their heads. But why mess with history? Why try to recapture something that ended on such a high note?

A few nights after our interview, Miller and I run into each other at O’Rourke’s and he finally gives it to me straight.

“I think I was one of the hold outs who didn’t want to do this show, because I’m still making music and doing stuff, and I felt like I was living in the shadow of this thing that had happened, and that I could never really meet that again,” he says. “Everybody was expecting Columbia vs Challenger after that.

“But then one time, I played a show with a younger band – Thundersandwich – and one of their members came up to me and he said, ‘When I first moved to Lincoln, I didn’t know many people here, and I came to a show at Box Awesome, and I saw you guys play. I loved your music, so I immediately went out and bought a keyboard.’”

“That, for me, was this weird moment,” he says, “And I was, like, it did mean something. It meant something to somebody else. And I thought, ‘Why are we just packaging this in the past?’

Wiesehan, meanwhile, had a similar come-to-Jesus moment. He explains, “I went and saw Quasi, a band I loved when I lived in Portland. They were playing in Seattle, so I went, and I felt that again – that feeling I had during our last show – that feeling of being possessed by the music. And so I wanted to play again.”

After that, the pieces started falling into place. And, once again, you can credit the closeness of the Lincoln music community for the quickness in which they fell.

“The main driver was Theo, cuz he was out of town, so we had a series of dates we all looked at, and we decided this weekend [September 24] would be the best one to do it,” Miller says. “I heard when I started asking about it, that this Beer Nebraska thing was going on, so I asked around about the show. I wanted to mainly just make sure we weren’t conflicting with it, cuz we wanted to have our own thing and make sure we weren’t in the way of it, and they were like, ‘Why don’t you guys just play it?’”

From there, it was just a matter of – excuse me – getting the band back together. 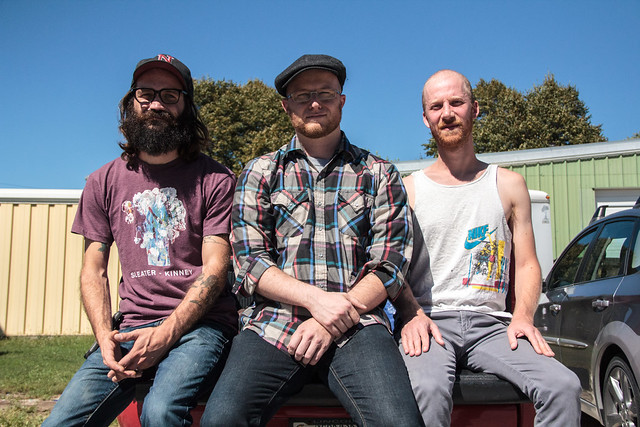 So it was set. On the 24th, Columbia vs Challenger will join Cursive, Criteria, Universe Contest, and Better Friend in the Zipline Brewery parking lot, from 2pm to 10pm, for Beer Nebraska, an event co-hosted by Zipline and Hear Nebraska (RSVP here).

One of the last questions I asked the guys is what their hopes are for the show, and they all have similar expectations.

“For me, I just hope that we have a good show,” Miller says. “That we play well, and we have fun, and people enjoy themselves.”

Wegner adds, “It’s already been fun enough to just hang out with everybody.”

“I hope to see some of the people who used to come to shows that’re still around, y’know?” Todd continues. “I haven’t seen some of those people since we played, so it’ll be fun to play with them and see them. That last night at the Box felt like a celebration with all of our friends. Everyone was having a good time, so I’m hoping we can see people we haven’t seen in a while and have some dancing.”

“I’m kinda surprised that there’s any interest in it at all, really, among anyone other than ourselves,” Wiesehan says. “I just think it’s gonna be fun to play music with those guys again.”

And, in case you’re worried about whether or not they’re actually voting for Trump – if you’re still having a hard time telling if that was a joke or not – Miller sums it up nicely: “There’s a time and a place for politics, and this time and place is about…” He pauses. “Us. There’s no room for Donald Trump or Hillary Clinton.”