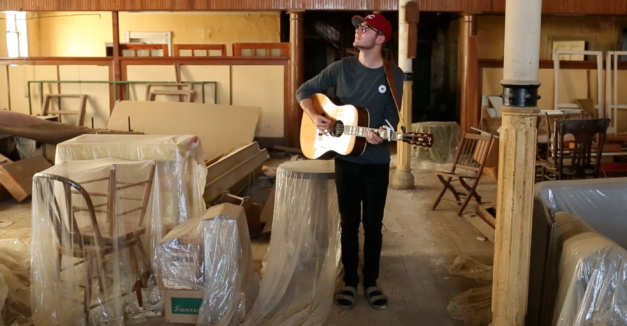 Singer/songwriter Ian Miller enters stage right of Auburn’s long-abandoned opera house, cooing gently about sleeping through the seasons. It’s an interesting juxtaposition, his recollections of the fight to break from inaction and observing the same struggle in his peers, all while the infrastructure around him is itself ossified in time.

It all feels so monumental at such a young age, and when Miller sings the title, “Climate Change,” it’s a wonder-aloud moment on which the future hinges. His delicate, rhythmic guitar parts push the song forward and seemingly force him to think on the fly. It’s all happening so fast, and his invocation of “the news” gives us something universal to ponder: Is anyone out there watching?

Miller, now a Nashville resident, returned to his hometown in early June for a pair of performances: one in front of his fellow townspeople at Legion Memorial Park; and the other inside the dusty, cluttered opera house above the downtown intersection.

Watch the latter, a rendition of new song “Climate Change,” below: