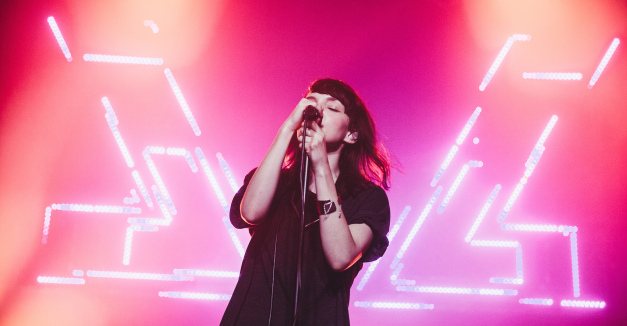 The last time I stood under Sokol’s Auditorium’s crystal chandelier was in April for Annie Clark of St. Vincent, a creature so dynamic that her pointed chin and bottomless eyes should have a following of their own. I watched two grown men in the audience, one of whom was in a wheelchair, exchange blows over the front row privilege to bask in her aura. I searched in vain for a crack in Clark’s carefully choreographed alienness, a presence which, at this point in her career, ensnares fans as much as her music.

But Wednesday night, nearly 1,300 people packed Sokol for electro-synth trio CHVRCHES with hardly any idea of the physical souls behind the music. As the crowd milled around before the show, it felt like a blind date with friend of a friend whose actual personality is still up in the air.

“I mean, I’ve heard them on Spotify a little bit,” the girl behind me said. “And I liked that.”

“I bet she has bangs,” a friend guessed, half-jokingly, “and they will all be wearing black.” 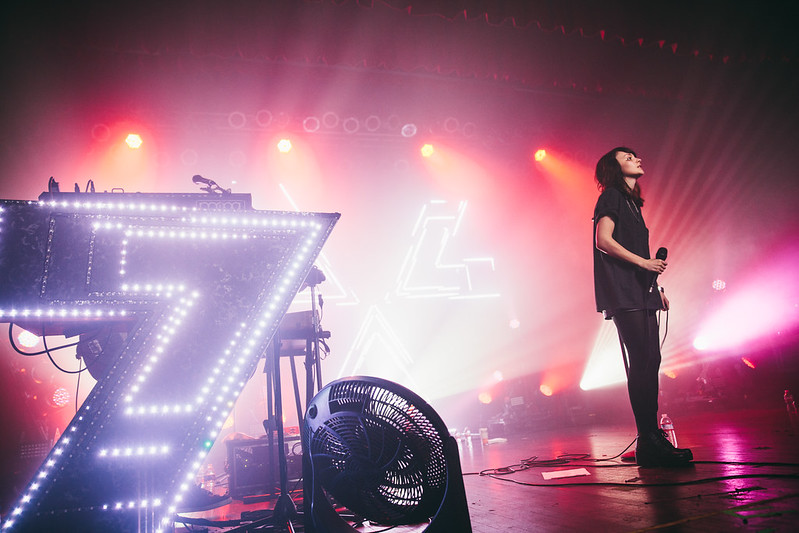 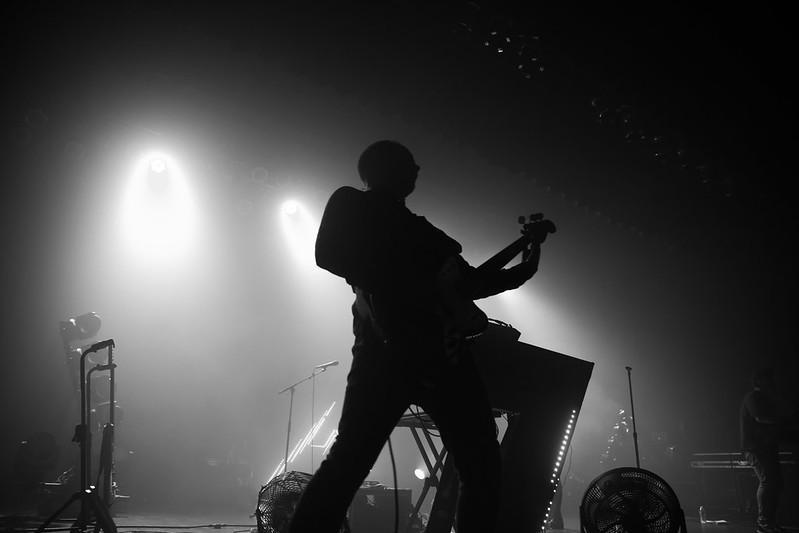 Mystery is part of CHVRCHES allure. The Glasgow-based band famously released its debut single “Lies” anonymously online last May, followed by an full-length, The Bones of What You Believe, in September.  Members Iain Cook and Martin Doherty accompany Lauren Mayberry’s vocals from behind two banks of analogue synths, linked by a controller. The soprano rising above suppressed male vocals creates the striking contrast achieved by bands like Stars and Phantogram.

Wednesday night CHVRCHES pounded through a Tron-esque light show and deafening 13-song set — the entirety of their only album. We, the audience, sweat and jumped in technicolor-inspired enthusiasm. And after an hour we all left, good tastes on our tongues, but without feeling like we ever really met.

Mayberry is everything you’d expect hearing recordings of her baby soft soprano. Petite and ethereal, with delicate features and, yes, choppy brunette bangs. Her vocals were powerful, soaring over bass loud enough to feel the reverberations through loose clothing. But onstage, she seemed to channel, rather than create, the sounds. As a performer, she was devoid of emotion, staring intently toward the back of the auditorium, only dancing by standing in profile and occasionally punching the air with the hand holding her microphone. 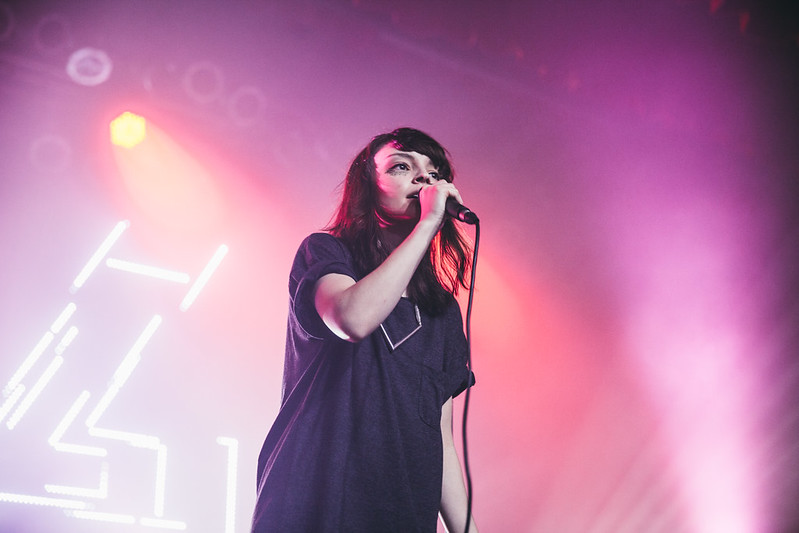 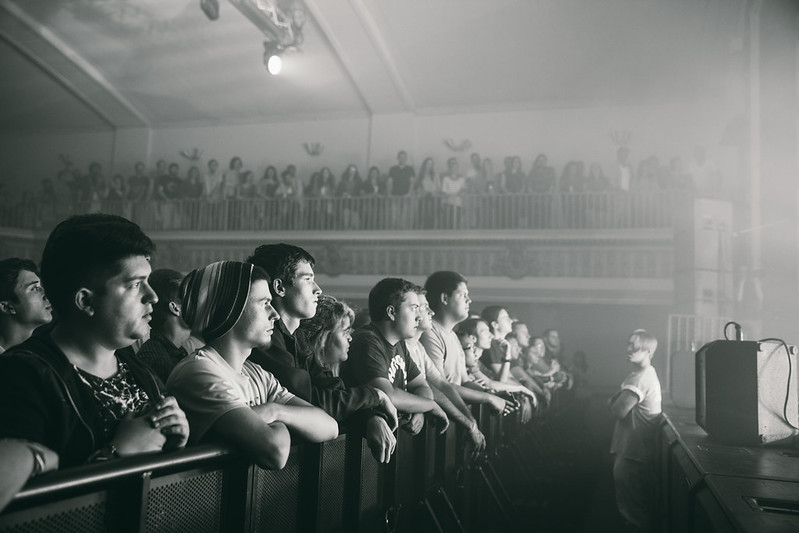 The lights, in variations of CHVRCHES album art’s 60-degree angles, never stopped glimmering, flashing and soaring in synch with each song. They did a better job of hiding band members than highlighting them. The only unique CHVRCHES flavor we saw Wednesday came mid-set when Doherty emerged from behind his synthesizer and switched places with Mayberry to take lead vocals. “Hi, it’s me,” he awkwardly introduced himself. Then he launched into “Under the Tide,” splaying his arms and twisting his face to squeeze out the lyrics “Stay under the tide/Stay in my eye line.”

The audience loved it; he moved back and forth up and down on the stage in a style so earnest and different from Mayberry’s you wonder if he’ll get in trouble later for showing her up. Then he was back in his corner and the ice-cold light show continued.

Devoid of a quirky or celebrity personas, what is it about CHVRCHES that nearly sold out Sokol, on a night they competed with The War On Drugs show at The Waiting Room? Why could the guy behind me sing every lyric to all 13 songs without knowing the band members’ names? Why was the audience’s cheer for an encore the loudest and longest I’ve heard in years? 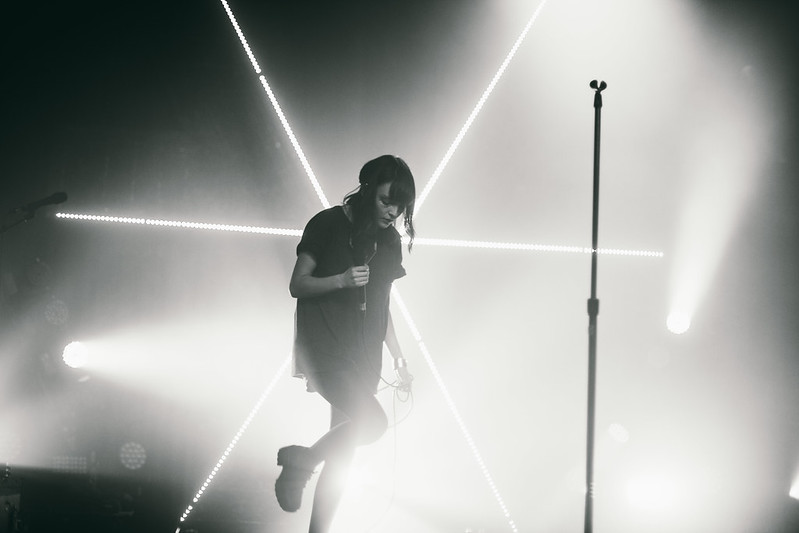 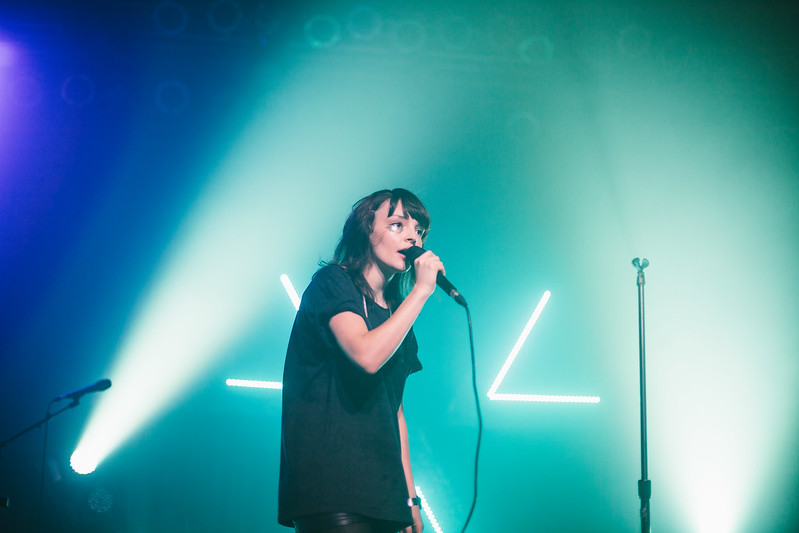 In one of her few remarks to the audience, Mayberry confessed she’s not sure either.

“We didn’t really know who had heard of our band here,” she said. “And then we heard War on Drugs was playing and we were like, ‘shit.’”

If it’s possible to separate the artists from the art, will CHVRCHES blend of sadness, pop and sweeping sound be enough to sustain past its first album? As CHVRCHES expands its discography and experiments on tour, it may find its personality. Or maybe it doesn’t want to.