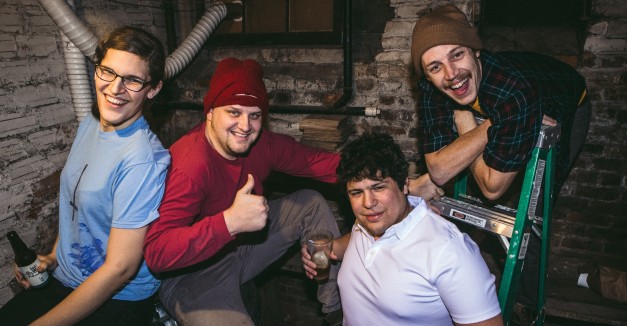 When I suggest to Emily Wynn that her band, The Crayons, traffics in the cartoonishly dark, she corrects me. There’s very little caricature to Wynn’s work with the band, I’m told. The acrimony is real, the rancor, the venom.

So maybe The Crayons just traffics in the dark, no qualifiers. The secret to the irreverent exuberance of a good Crayons song must be in its earnestness, then. No one is the butt of any joke here. Orange, the band’s second album, is a heedless embrace of the churning black gunk that, on our worse days, envelops our spirit.

The Crayons releases Orange on Friday night at the Zoo Bar with Bogusman, The Morbs and Ambulanters. RSVP here. It marks the metal-punk band’s final show.

Depending on which timeline you choose, that show is anywhere from one to four years in the making. On a cold Friday evening, sitting around a table with the band in a Near South apartment in Lincoln, one week out from the release show, the weight of all that time feels like it has just recently been lifted. 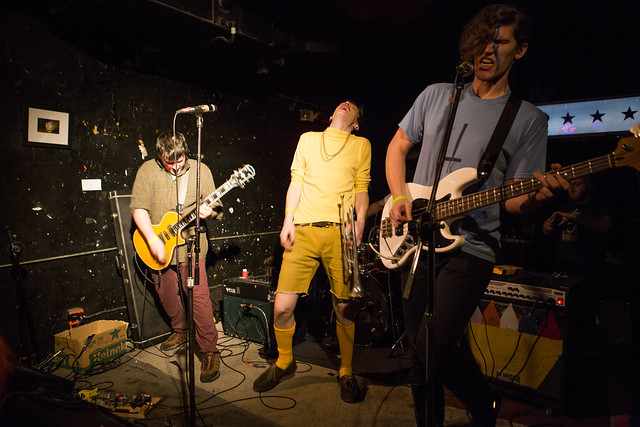 In spring 2014, The Crayons released their debut Teal with hopes of releasing Orange — for which the songs had already been written — shortly after. Then the band’s original drummer moved and the project was effectively shelved.

About a year later, February 2015, the band played its first final show at Lincoln Exposed. A few weeks later, one more final show at Tree House. Between then and now, they finally put Orange to record with Jon Oschner of All Young Girls Are Machine Guns.

Because sitting around that dining room table, it feels like a timely ending. Between sharing beers and stories of shows past while working out the final details for Friday night, there’s an easy laughter to the recollections: nostalgia plus closure.

For Wynn, who handles bass and vocals for the band, she says she’s ready for a new kind of project where she’ll continue playing with guitarist Brett Kelly. She’s perhaps done churning in the same black muck that has been the wellspring for so much of her material over the years.

“A lot of these songs, I don’t feel like they’re my songs anymore,” Wynn says. “When I wrote a lot of them, I had a lot more depression and anger in my life.”

Take “Bug,” one of Orange’s heavier numbers, about literally being a bug: inconvenient, at best, to those around you. The refrain, simple enough, goes “I am a bug” while Tysdal’s trumpet buzzes above chaotic guitar.

During the writing of most of The Crayons’ catalogue, Wynn says she was beginning to come to terms with her own identity. In May 2014, not long after Teal’s release, she came out as a trans woman. Much of the fodder for Wynn-penned Crayons tracks came from her depression and self-image pre-transition.

That turmoil reigns on Orange and tracks like “Black Lungs II,” about destructively dealing with depression. “I wish I was a smoker so I could die faster/I could get cancer and it could be over,” she sings. And the rollicking melody, the poppy bassline, that self-destruction sounds kind of fun.

Maybe that’s why you get the impression that the dark subject matter is intended to be taken lightly. And Wynn’s complete seriousness, that wholehearted wish for quickened death, feels at least therapeutic, if not radical.

Wynn says stepping to the stage on Friday night will be more like performing those emotions than releasing them, as it would have been at past Crayons shows.

“I think artists can change as people and still honestly perform older material,” she says. “To me it is more about no longer being able to write new material from that same dark place.”

In that way, a final Crayons show is as much about moving forward as it is releasing three year-old songs. Like closing a book to begin a new one.
Tempting though it may be, Wynn is rightfully hesitant to conflate her transition with the Crayons timeline. It took her years to come out to herself and to the public. To use her band’s end as a metaphor for a triumph of self-definition would be reductive to say the least. The band is ending for myriad practical reasons. Among them, drummer Stuart McKay is moving to Florida the day after the show; Wynn wants to save her voice from the guttural howls of Teal and Orange. And it’s not as though personal journeys ever have definite codas.

“I still suffer from depression, transition will not make your life perfect,” she says. “But the amount of self-hatred in my day-to-day life is much lower.”

It’s more right then, more responsible, to think of The Crayons not as allegory but an artistic period in the lives of Wynn, McKay, Tysdal and Kelly.

The band spent months working on Orange with Oschner, making sure the band’s vision was clear. It’s a major contrast to their work with Teal.

“For that one we actually booked the release show before we were done with the album,” Wynn says.

Kelly recalls the four of them sitting in a living room just hours before Teal’s release show, hurriedly burning CDs on their laptops.

For the extra time spent on it, Orange glows as a precise and warm work of trash punk. Credit to Kelly and Wynn’s guitar and bass as incising complements where, in clumsier hands, there would be a mushy wall of distorted noise. Above it all, Tysdal’s trumpet plays alternately the part of doomsaying herald and golden polish. Percussion throughout Orange creates a subtle sense of genre-bending, from reggaeton to garage rock. Each element a hallmark of careful decision or subtle intuition. 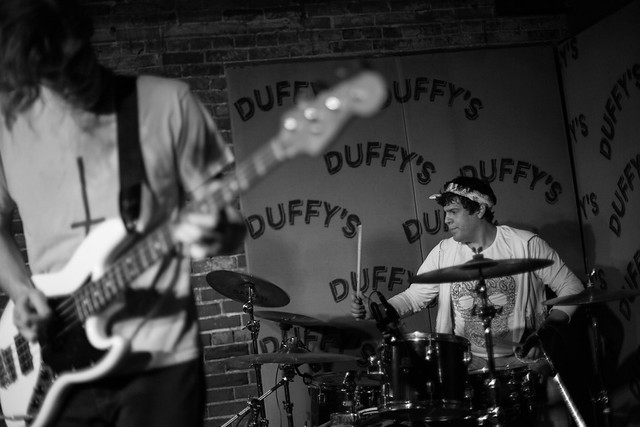 Knowing all of that — the sheer effort of time, Wynn’s own experience with her written material — the idea that Orange not get a proper release feels like an affront to the artistic process that birthed it. But that was nearly the case. With McKay’s relocation looming, the band wasn’t sure they would find time for a release show, let alone press CDs for it.

“I thought we weren’t going to get this out for a while,” Kelly says. “But now I’m glad, we’re getting this shit out and having a show. It’s better to end that way.”

Tysdal says he finds some relief in the finality. No more wondering if they’ll play a show or release a record. This is it.

“We’re done. Everything is in place.”