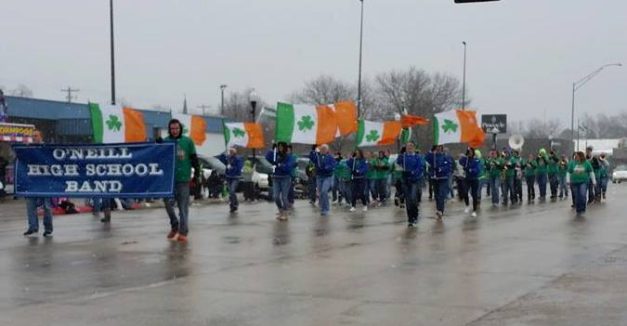 Superior rating after superior rating trickled in — all told, 14 out of a possible 15 — and the mood among O’Neill High School band students was electric. They high-fived in the cafeteria, exchanged words of encouragement, showed up at each others’ performances. Their dedication was paying off — driven, in its band director Chad Dean’s eyes, by maturity and responsibility.

He recalls it as though district music competition might have been held at Memorial Stadium.

“District music to me is like Husker football is to a lot of people,” Dean says. “It’s my big day, it’s our big day for band and choir. It’s real important. So to watch the kids make it important, it’s just a joy.”

Dean’s job requires the same discipline he imparts onto his students. The Iowa-native musician and band director has taught 5th-12th grade for 23 years, both at O’Neill High School and at Avon, S.D., before that. His bands are consistently successful at state conferences while the program maintains a strong presence within O’Neill’s largely Irish community.

I reach Dean by phone one summer morning, and he’s preparing for a teachers conference. Between coaching baseball and other summertime activities, he only manages to go every couple of years, but it keeps him abreast of evolving trends in music education.

The O’Neill High School band went to this year’s District III competition in Atkinson, Neb., the most prepared it had ever been, Dean says. All 15 entries had been been learning and rehearsing vigorously since February, a testament to their instructor’s own personal yet disciplined style.

By the time April 22 rolled around, instead of succumbing to the logjam of springtime activities, seemingly everyone was ready. There was a positive aura about the O’Neill camp, from competition room to rehearsal space. When the first results came in from the morning large group performances — “superior,” the best possible rating — it was like a weight off Dean’s shoulders.

“It really took the stress off me but I think it took the stress off of themselves, and the ratings showed because of it,” Dean says. “Once those came out and the kids were happy with those results, I think that kinda got the momentum going a little bit.”

It was senior year of high school in Broomfield, Colorado when Dean discovered he wanted to teach music. Then on track to teach math, the variety possible in running a music program was more attractive. Calculus was always going to be calculus, year after year. With music, not so.

Dean started as a trombone player at age 10. His mother was a choir director. In fifth grade, he started band with the intention of playing trumpet (“It only had three valves. It looked easy.”) Instead, his instructor fitted him for trombone because Dean was more physically suited to it (or as Dean puts it, “my lips and my arms.”)

After graduating from Yankton College, Dean began teaching in nearby Avon, just 40 miles away. He quickly realized that he would be responsible for multiple age groups, a prospect that both excited and challenged him. Teaching multiple bands in a day means shifting his instruction style to suit skill level or band size. It also might mean navigating from one good session to another sub-par one.

But the advantages — building a program from top to bottom — prevailed. His tenure in O’Neill means he has been able to “develop” students over time, like prospects in a baseball team’s farm system.

“I’ve been in O’Neill long enough where I’ve seen kids start off in eighth grade and some of them are off having careers themselves,” Dean says. “That’s part of the joy of teaching is watching kids spend eight years in music and go off and be successful in whatever they do in life.”

One of those students is 2012 O’Neill High School graduate Rachel Price. Then a drummer in Dean’s snare line, Price is now pursuing her music career in Nashville and in the process of recording her first full-length album. Over the phone, she praises Dean’s ability to keep the class atmosphere light while it was working its hardest. She also credits his guidance as a drum instructor among her influences.

“I attribute a lot of the aspects of what I’m writing right now back to Mr. Dean,” Price says. “Some of the rhythms in my songs and how I sing things and the ability to keep time … [are] ingrained in my personality and how I write things now.”

“He could be teaching a five-over-four polyrhythm and make a third grader understand it.”

Havranek drums with country/rock band The Back Forty, which has recently opened for the likes of Martina McBride and Eric Casley. But in Mr. Dean’s classroom, from eighth grade until his high school graduation in 2008, he was a trumpeter and a two-time all-state player of the euphonium (which the layman might recognize as a kind of miniature tuba).

Though Havranek’s first interest lay in drums, Dean’s band was flush with them and in need of brass players. Havranek says Dean’s ability to read his students put students like him in the best position for success — much like the coach of a sports team.

“He really knew how to arrange a band,” Havranek says. “…He knew where the strengths were and knew how to make the [weaknesses] stronger.” 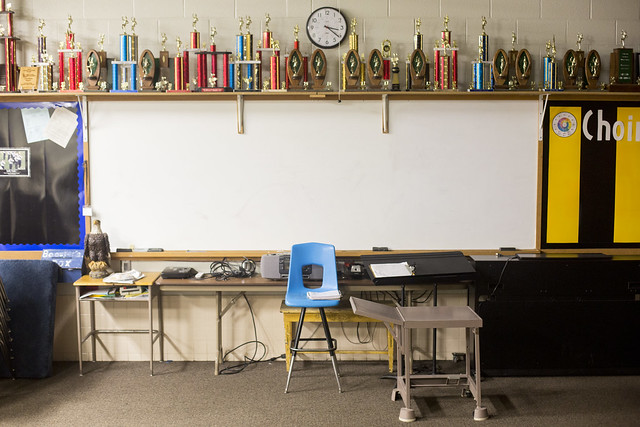 Dean’s impact reaches further out from his classroom into the O’Neill community, where his bands are involved in a number of cultural events. They entertain everywhere from retirement homes to high school football games to the town’s biggest festival, its annual St. Patrick’s Day parade.

While Dean finds it important to connect with that aspect of O’Neill’s culture, his fondness for variety extends to public performances. He feels an obligation to introduce new music to the town audience because his band might be the only live performance some see all year.

“In picking music for our band or the groups, it’s important that the kids are playing stuff that is relevant but stuff that the audience can be exposed to,” Dean says. “We’re teaching the adults as well as the students sometimes.”

At the end of the day, it all builds to the band’s main event, the annual chance to test his program’s progress against its peers. He says marching band’s military nature and its required discipline sets the tone for the school year. O’Neill High School band students enjoy a rich musical education, sure, but those skills translate outside the classroom.

“We’re also teaching them how to prepare themselves for performing in front of a group,” Dean says. “We know the kids are going to have to do it later in life.”