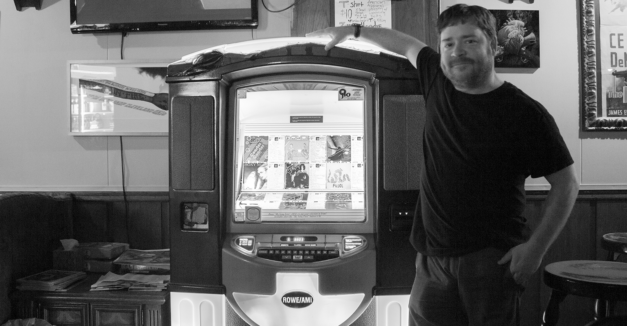 It’s 1 a.m. at Brother’s Lounge. As patrons of varying levels of inebriation spill out onto 38th and Farnam, Big Black spits out of the jukebox, sounding like broken glass having an anxiety attack. Only a few patrons sit around the long, divided bar, several seats between each. It’s a little too dark, band stickers adorn every surface and the barkeep will give you a $2 bill to play The Adolescents. There’s no mistaking — Brother’s does its own thing.

Owners Trey and Lallaya Lalley have kept it that way for 13 years, and on the eve of the bar’s 50th birthday, they’re not changing now.

Brother’s wasn’t always punk — when it opened in June of 1966, (6/66, as Lallaya likes to point out) the Lounge was a cocktail place where the waitresses wore Playboy Bunny-style bustiers, and there were no windows, so your wife couldn’t find you.

In the late ’90s Trey and Lallaya would go to the bar on Sundays when they weren’t busy running The Capitol Bar and Grille. The then-owner of the bar eventually offered Trey a job, and within six months he was the manager. The titular brothers had him sign off on a deal to sell after five years. Once the bar was theirs, the Lalleys converted the joint into what it remains today, an honest dive with stiff drinks and a hard-hitting jukebox.

“The jukebox is the best way to filter customers, positively and negatively,” Trey says. “It’s a way to tell people, ‘Hey, here’s what we’re about.’ If you get it, cool. If you don’t, sorry. There’s 99 other bars on this street.”

Listeners of classic rock or modern pop won’t have much luck on the machine. But for others, it’s a glistening jewel of grimy rock, showcasing glowing racks of seminal punk and goth ranging from the late ’70s to now. Some acts, like Shannon and the Clams, have even found themselves in the jukebox when they played the bar — a moment many in the eclectic grab bag of small punk bands who tour through would love to have. Bands like X and the Adicts mingle with My Bloody Valentine and Gary Numan. Bauhaus and Wire meet Protomartyr and Screaming Females.

People who don’t get it don’t get it, and the Lalleys don’t care. Some people come to the bar assuming it’s related to the Brother’s in Lincoln, a chain sports bar that sprouts offshoots in sporty college towns. The Lalleys laugh, saying people must think bars come out of a can. A person once asked if the Blackstone Brothers had a “normal” jukebox. Another person put their thoughts on Yelp:

“I don’t think there’s one album on there that I’ve ever heard of. A lot of my friends think the juke selection is ‘rad,’ but I’m not into indie music that sounds like it was recorded in a tiny apartment,” the review says.

“Sorry I don’t have Coldplay on the jukebox, I didn’t know I had to do that” Trey says, shrugging.

“All the records come from our house,” Lallaya says. “Like that Love and Rockets album. It’s here so I don’t have to listen to it at home,” she says, cracking up at her husband. “He likes that Sesame Street California punk.”

“If the song title isn’t the chorus, I don’t like the song,” he jokes.

Compared to the internet jukeboxes that seemingly replicate into every other bar, the CD changing machine might as well be Mesopotamian. Some of the album art is lopped off where Trey cut the covers that didn’t fit right. The lights in the selection window dim whenever a song plays. Fake neon dances around the silhouette of the machine like it’s Joseph’s technicolor coat. Still, it undoubtedly hits a spot in the regulars’ hearts. The Lalleys even claim that a band’s sales at Homer’s Music used to spike when they put an album on their player.

But the feeling one gets when perusing a punk jukebox is unmatched. It’s like Netflix for memory lane. Hang around long enough, put on a banger, and you’re sure to hear punk veterans reminisce about NOFX destroying their mom’s house or Rikk Agnew nailing every riff the first time and last time they saw him, 30 years apart.

And though the albums change somewhat regularly, some will never come off. An album by Anti-Nowhere League has been there since they officially took over the bar in 2003.

“We always joked we’d walk down the aisle to it,” Lallaya says. They actually did.

Despite the rapidly changing Blackstone District surrounding them, Brother’s plans to stay the same neighborhood bar. They’re the oldest business on the street, around long enough to see their friend’s kids starting to drink there.

“I love the randomness. I love that people could come in here no matter who they are because they weren’t judged. Whether it was the 80-year-old guy on Social Security who lives across the street or the 24-year-old who just got out of prison, whatever it was,” Trey says. “We’re too stubborn to change.”

Brother’s 50th birthday party is this Saturday at 3812 Farnam Street. Jaw Knee Vee from Minnesota, Plack Blague from Lincoln, and a Love and Rockets tribute band will probably play the jukebox after their sets.