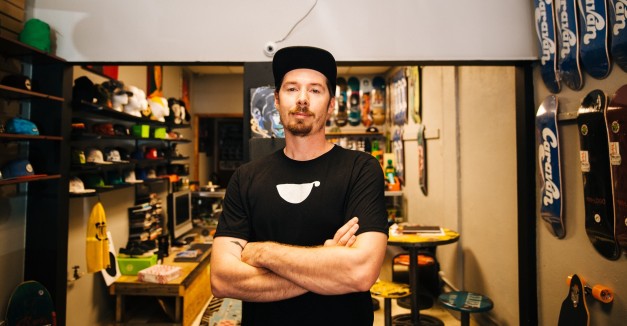 Skateboarding became so culturally entrenched in the America of the 1980s and ‘90s, it birthed a variety of musical sub-genres and sects almost by teenage association: skate punk, skate rock, skatecore.

But North Platte, Neb., musician and business owner Brandon Raby finds a deep sociological connection a half-century older than the proliferance of skateboarding culture. The owner of Caravan Skate Shop and Espresso Shoppe in North Platte’s downtown business district, Raby is also an accomplished guitarist in the discipline of gypsy jazz.

“I see distinct similarities,” says the 36-year-old Raby, who’s been skating since age 11. “Both are subcultures, basically. Skateboarders are nomadic, just like the gypsies were. People who traveled and settled outside of cities. They’re kind of outcasts, as well.”

Founded by Django Reinhardt in the 1930s, it’s a style Raby has described as “American jazz with a French accent.” You’d recognize it for the chromatic acoustic solos and guitar melodies fit for a European campfire or café. Bet on finding a gypsy jazz interlude in any Woody Allen movies from the last 15 years.

For six of the last seven summers, Raby has traveled to Northampton, Mass., to take part in the annual gypsy jazz celebration and camp, Django In June. Each year draws about 200 campers, hailing from the United States and internationally, and 20-25 instructors, mostly from Europe and Canada.

Raby says he can look around the room each year and tell the beginners from the intermediaries from the masters, even if, to an outsider, everyone appears to be flying around the fretboard in a distinctive style. The true experts, Raby says, have locked in the right hand technique, the thumb-picking style that mimics a drum.

As far as subcultures go, it’s no wonder why players from around the world gravitate toward Reinhardt’s story. To hear Raby tell it, the over-arching mystery of the genre is how such an intensive style was created by an illiterate man with no schooling and no music theory training. Raby says that even 80 years later, it almost interrupts the style of music to overthink craft.

“Most of these gypsies growing up following him were very similar,” he says. “They played the most advanced chord progressions, substitutions and inversions. Their improvising was flawless and brilliant. But it’s all taught from ear and their heart.”

Raby’s attraction to the gypsy identity can be traced to his early life experiences with his father, Al, a North Platte-based folk and old-timey country musician. As Al’s bassist for a few years growing up, Brandon was able to observe both his father’s roving musical lifestyle and what it meant to carry yourself like a professional.

“I learned the business, how to perform, how to entertain,” he says. “And you expected to be paid.”

Raby has done his best to bring gypsy jazz back to North Platte in recent years, with his group Blue Swing (which just put out an album last month), giving the occasional guitar lesson and also booking touring gypsy jazz acts like the Rhythm Future Quartet at his coffee shop.

Even if North Platte residents don’t immediately associate the genre name with the guitar sound, gypsy jazz is a fairly easy sell.

“When you say the name, people are mostly intrigued,” Raby says. “The story behind it is just very interesting. That makes the music interesting and unique before it’s even heard.”