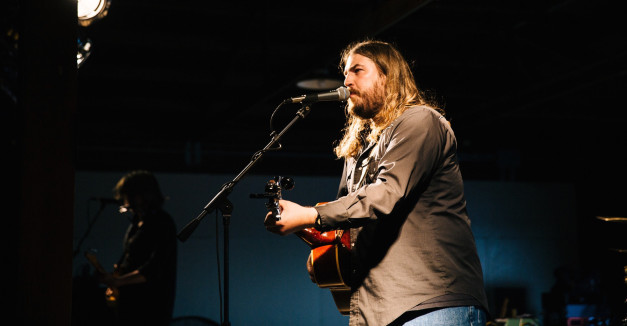 One of the leaders and most visible members of a Benson-anchored songwriter scene, Brad Hoshaw’s tender, often intimate, lyrical voice belies his persistent interest in collaboration.

“After every [Exchange] meeting someone comes up and tells me how afraid they were to attend, but how helpful it was,” Hoshaw says of BSE, a meeting of Omaha musicians for unpacking and workshopping their material.

“We jokingly call it the Songwriter Support Group because these meetings really do benefit everyone’s mental health.”

Hoshaw and his roots rock band play our Hear Omaha series this Thursday at noon. The series is held on 13th and Howard in The Old Market. RSVP here. As always, we’d like to thank the Greater Omaha Chamber of Commerce for making Hear Omaha possible.

Before the show, we caught up with Hoshaw via email about his new film-scoring plans, calling an audible on his annual songwriting retreat and how he wrote “Talking To God.”

Hear Nebraska: Having now spent a year with Funeral Guns, my favorite deep cut/oddball is definitely “Talking To God.” It’s whimsical, funny and maybe a little sly in a way the rest of the album isn’t.

Is that bathroom scene based on a real incident? If not, how did you think it up? And what role does playfulness have in your songwriting (the kind that shows up “Talking To God”)?

Brad Hoshaw: The song is not about any particular incidents that happened to me; it’s more of a journey through different scenarios that I’ve observed in which someone may think they know something and then realize that they really don’t. The first verse is about religion, the second about love and advice from others, the third is about how you talk to yourself.

For instance, the first verse is about me talking to god in the bathroom, which I meant it as a juxtaposition between the respect for religion and the very real day-to-day interaction with it and that religion does not always have the answers. The second verse refers to a friend of mine who’s marriage ended after one month — and that even the ones you love and trust do not have all the answers, including wives, doctors and dentists.

The final verse is referring to that same friend who went through a dark period following his divorce and wallowed in contempt and bitterness. But even that path did not hold all the answers. The chorus just reinforces that feeling that none of us know what the hell is going on and as soon as we think we do, the world around us changes. I beleive the song came out in a whimsical fashion in order to illustrate the circular thinking that can occur when contemplating these things.

HN: Tell us a bit about the goals for the Benson Songwriter’s Exchange. And bouncing off that, how was your songwriting career/journey been inflected positively by collaboration?

BH: The Benson Songwriter’s Exchange was started as an encouragement for creative people to be less afraid with their art. My experience in other cities and at my annual Wisconsin songwriter retreat is that once you get past the fear that someone is going to hate your song or that your ideas are bad, you can really grow as an artist.

Omaha songwriters are still very guarded with their process. Many still want to claim complete ownership of the good songs meanwhile hiding the bad ones like they never existed. We all write bad songs and say really trite things when we’re working out songs. A group like the BSE allows everyone to see this side of others and therefore lose that self-criticism and open up to more free creativity. After every meeting someone comes up and tells me how afraid they were to attend, but how helpful it was. We jokingly call it the Songwriter Support Group because these meetings really do benefit everyone’s mental health.

HN: I just saw on Facebook, no cabin retreat this year? What’s the alternative and is there anything specific you’re hoping to get out of this year’s trip?

BH: We’re still doing a retreat this year, but we will be staying in tents and campers instead of the cabin. Unfortunately, several months back someone broke into the cabin and turned on all the water, leaving it running for a few days. That caused the cliff next to the cabin to erode to the point that it’s unsafe to stay there right now. The owners have to lift the entire cabin up from its foundation and move it further away from the cliff before we can use it again. Hopefully next year.

I try to leave my expectations at home when I go to the cabin. I don’t expect songs to come, but am very pleased when they do. I do always look forward to meeting new folks and seeing old friends. At the very least, I get to spend some time away from the daily distractions and open myself up to the muse for a few days.

BH: My current project is wriitng a soundtrack for a local movie called Black Luck. This is my first step into film composition. It will include instrumental music, as well as lyrical songs. The director wants every bit of music to be written and/or performed by me, so the soundtrack may sound like a new album. Black Luck does not have a release date yet.