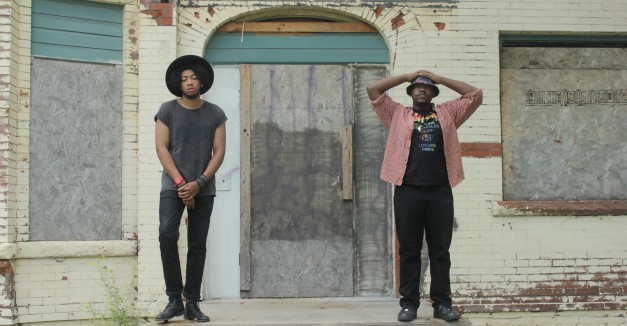 In terms of performance, hip-hop often demands more from a live act than any other genre. Confidence, charisma and style (or lack thereof) are especially visible traits.

Over the last couple of years, Omaha hip-hop duo Both have been honing their own style. Their recorded work has opened up over time, which emcee Scky Rei says is due to being less bound by influences and more trusting of what flows from himself artistically.

“I was withholding my full potential, which I’m still reaching for new heights with as well,” Rei says.

He speaks specifically about the difference between Both’s first LP and their forthcoming EP Bothsucks, due out Aug. 7 on Make Believe Recordings. Both plays our Hear Omaha concert series today at noon at 13th and Howard. Ahead of the show, we talked to the pair about its music growth since earlier work, dealing with inner demons on “Social Expectations” and the collaboration with Psalm One.

As always, Hear Nebraska would like to thank the Greater Omaha Chamber of Commerce for making Hear Omaha possible.

Hear Nebraska: I’d love to know where Loop’s head/tastes were at when making beats for the new EP. They span from emphatic to downright ominous, which is a noticeable shift from the lounge vibe of the debut LP’s sounds.

INFNTLP: A lot of the tracks that made the EP weren’t made in one sitting. They were spread out all the way from last year to a few months ago. Just different moods at different times.

HN: How did the collaboration with Psalm One come about and what do you make of her verse on that song? It’s vintage Psalm One content-wise, but I’m wondering if there’s any workshopping the verse when you’re in the room. Or does she just go?

Scky Rei: The Psalm One collaboration just happened after playing a last minute show with her at the Sydney. We were put on the show the day before with Black Jonny Quest and we all enjoyed each others energies. Psalm said that our voices would go well on track together, [and] from there our connection started to develop. As far as Kizzie’s verse, I thought she came in with her samurai sword and murdered the bandits terrorizing the village. I trusted in her ability of simply being a creative artist so she just ripped. I let her go and attack as she saw fit. Besides she was in Chicago when she did her verse.

HN [from former managing editor Chance Solem-Pfeifer]: Talking to you about “What’s The Word” was the first story I did for Hear Nebraska two years ago. Feels like forever ago, and I’m curious how you reflect now on your earlier solo work. For my money, you can totally see the seeds of you and Nate’s current work, but the early work seem so restrained by comparison.

SR: As far as my solo work and our earlier work pre-BOTH, it was just Scky Rei and I wasn’t as open minded musically since I was going [for] a specific sound at that time. As time went on and BOTH came into light I found my voice. Before then, I feel I was imitating my influences instead of letting those artists that inspired me enhance what I posses within myself already. So restraint was exactly that. I was withholding my full potential, which I’m still reaching for new heights with as well.

HN: I’m still really taken with the “Social Expectations” Sonata Session from last year. As a song, it’s naked and vulnerable by comparison to most everything else in the discography. Does it feel that way from your vantage point, too?

SR: Well with Social Expectations, that was a personal song about Skylar Reed told by Scky Rei but produced by INFNTLP. I was dealing with a lot inner demons and social circumstances that caused me pain and confusion. It was meant to be vulnerable since I don’t put my heart on my shoulder in my everyday life, but I’m able to express it artistically through our music like most creatives do. There are a lot of issues [worldwide], but hell, even on our own doorstep, with differences in the earth tones of our skin, lifestyle choices, gender, class, and a number of things that simply can’t be listed in one interview. All that strain on me physically, spiritually and mentally at the time helped me write that song to release that negative energy. But I deal with things better now as I strive to build knowledge of self to develop the best level of understanding.

HN: What should Hear Nebraska’s audience keep an eye/ear open for in the near future, other than the EP dropping on Aug. 7?

SR: Not only Hear Nebraska, but the world should look forward to our future tours and a short film of our journey to make a full length project. INFNTLP and I would call this our lil’ step child baby we sometimes take care of. And look out for more national success as we transition from your favorite local to just another unholy national act that’ll get a 1.7 out of 10 on Pitchfork.