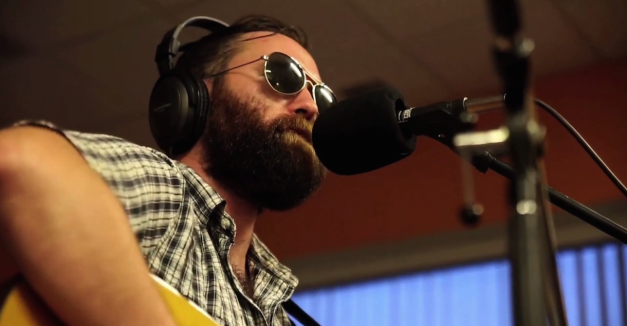 When I first wrote about Bonehart Flannigan it was back in early 2012, after Lincoln Exposed.

I said he wore his songwriting heart right out on his dirty sleeve.

But if you consider Bonehart Flannigan’s, aka Jon Dell’s, current peers in the Lincoln folk scene, 2012 was an interesting time. He’s part of the Sower Records Nebraska collective and music label, currently. At the time though, there was no Jack Hotel, no Bottle Tops, no Bud Heavy & the High Lifes. Two years later, for all the significant and laudable qualities of all those bands, Bonehart Flannigan remains the most immediate.

And why? Because there’s a way in which genre slows musical reception down just a hair. It’s a lens, a category that precedes the firing of an emotion. It’s a folk song before it’s a sad song, a happy romp, a redemptive personal hymn.

But in his performances, especially solo, Jon Dell puts on genre like a shirt. He needed it to get into the venue. He needed it for a chord structure. But the songs themselves are acute professions and they land as such.

He’s demarcated this solo work from his work in Universe Contest clearly, saying, “This is my artistic expression where Universe Contest is a bunch of guys having fun.” Well, that artistic expression runs the gamut of folk themes and topics new and old. “Get In The Van, Let’s Go” is very deliberately about a folk solo artist being on tour with his rock band. By contrast, “Mean Blade of Grass,” a murder ballad with a twist at the end, feels as old as scorn and betrayal itself.

His first album, Backpacks and Mason Jars is tentatively scheduled for a late August release. You can see Bonehart Flannigan at his Nebraska Folk & Roots Festival set this Saturday at 1:30 p.m. in the Market area of The Railyard. But right now he joins for a live solo performance on Hear Nebraska FM. Here is, Bonehart Flannigan.