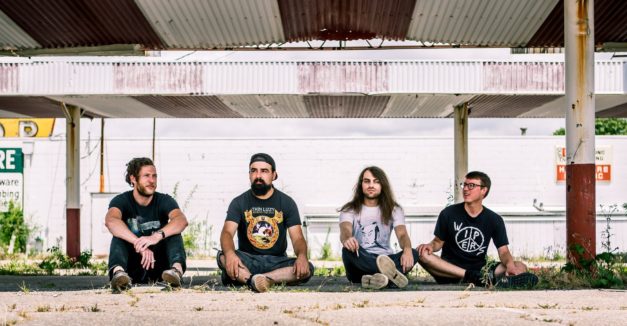 If you’ve seen Bogusman fill up a bar or Lincoln basement you know what they have in common with any self-respected punk or hardcore band. The music smashes into the audience, power chords and two-note riffs so deep and dark it’s hard to tell if you’re attracted to the melody of the song or just the percussion all those sources of noise are creating. You might very well have that experience if you check out their album release show at Duffy’s Tavern this Saturday (RSVP here).

But if you buy that album, the band’s first LP, you’ll hear clearly and intentionally what makes Bogusman an odd case of simultaneous rage, humor and a small marching band of instrumental parts. Bogusman the album is a heterogeneous showcase of what Nate Luginbill (guitar/vocals), Lee Lohrberg (guitar/vocals), Andy Peterson (bass/vocals) and Jackson Trover (drums) sound like in their most purely written sense. Luginbill’s screaming is isolated. Trover’s drumming is a very distinct instrument. The weight of Pederson’s bass often seems to decide whether a given song will be a numbing trap of quicksand or a punk romp that sets Lohrberg’s guitar lines free. The complexity is what makes it prog-punk and yet Bogusman songs never bend to admitting training or arithmetic. If it’s not too much to add the modifier “garage” to the mix, the album never gives up its attitude either. Sentimental forces, like say melodic singing, are kept to a minimum and the record is intentionally hokey in choice moments when the band teases slipping into something resembling a rock or pop song. If you feel that happening, expect an immediate sharp turn that says, “Yeah, we know that was there, but c’mon.”

Across ten tracks and nearly an hour, the album crystallizes what albums often do for bands created to play live. It’s a near-perfect, realtime charting of what’s happening in Bogusman songs. And if that sounds like you’re looking at a diagram instead of listening to a hardcore punk album, well you can hear everything written on the staff, but the sheet music is still conspiring to attack you.

Listen to the On The Record podcast team review Bogusman below:

Catch up with the latest On The Records episodes with our playlist below, which includes releases by Big Thief, Jack Hotel, Powers, Josh Hoyer & Soul Colossal and more: