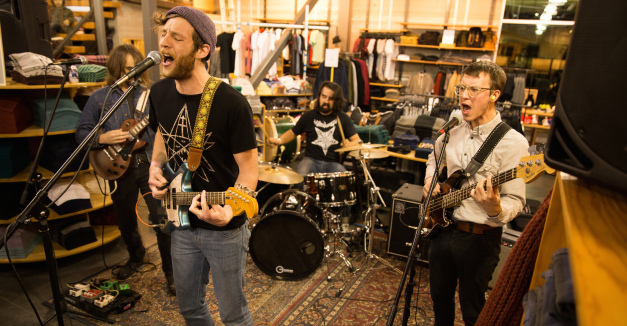 For a brief moment upon arriving at Urban Outfitters, it feels like we might be privy to an unplugged version of Omaha rock quartet Congruency and Lincoln sludge punks Bogusman.

The mood at these First Thursday shows, co-sponsored by the Omaha retail store and Hear Nebraska, is pretty laid back like that. Maybe it’s the small victory of a week coming to an end, or the fascination at sampling a diverse platter of local music acts and artists. It’s almost certainly fueled by the free pizza and beer. Whatever the reason, that relaxed attitude shone bright in each of the bands’ sonically diverse — but emphatically plugged-in — performances.

Congruency took the stage at 6:30 p.m., shortly after the roughly 30 art and music patrons had demolished the first round of pizza. After a false start, they began with a display of melodic dynamism on “Running Out Of Reasons,” which fused jazzy and driving power chords. Frontman/guitarist Nathan McInnis coaxed both wonderfully clean tones and grungy choruses out of his Telecaster as the band shifted seamlessly from shoegaze to near-metal and back. Their all-hands-on-deck vocal approach gave each member a turn at emotional expression, united in tone by soft crooning and aching wail. But they were at their best when they allowed themselves to stretch out during breakdowns and, ripping off precision solos over simple power chord progressions.

“Move around or do your shopping or whatever you want,” frontman Nate Luginbill said as Round Two of pizza arrived and Bogusman strapped in for their set. It was hard not to notice how playful and care-free they seemed, and maybe how ridiculous that notion is given the frantic nature of their music. Luginbill half-heartedly lamented forgetting guitar picks and a mid-set spilt beer. They were as spot-on as they were for Saturday’s Boximus Maximus, with sludgy punk riffs, sharply dissonant leads, and engine revving bass. The only thing missing was literal thrashing about the spatially restricted UO performance space. The band hit a complex string of notes in unison early on, prompting Luginbill to turn and crack a smile as though impressed by how polished they sounded. In the warping tempos of “People Like You And Me,” I couldn’t help but picture Luginbill driving a demented Wonka Wash locomotive, bassist Andy Pederson pumping grime with each thudding bass note. They ramped up the hellish joyride with “a song about smoking weed and watching tv” that sped on for roughly 60 seconds. As Luginbill sang “you’ve been a wonderful pleasure” to close the set, guitar notes ascended until they exploded to an abrupt halt. 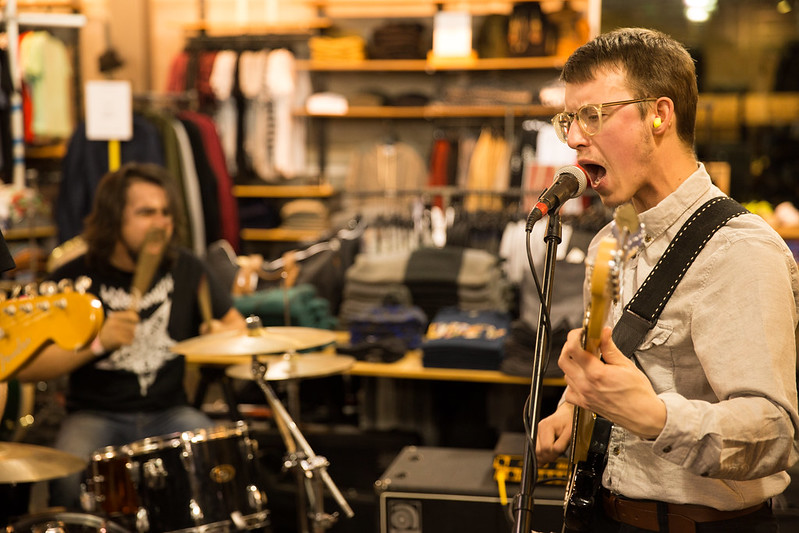 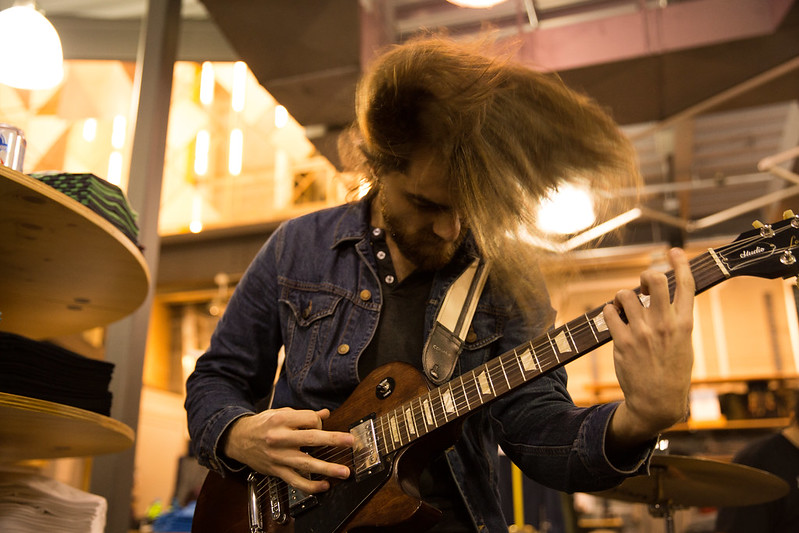 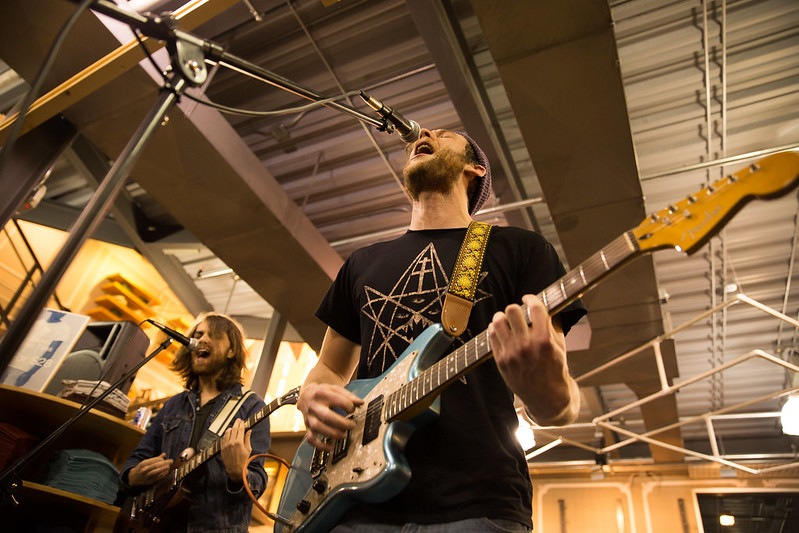 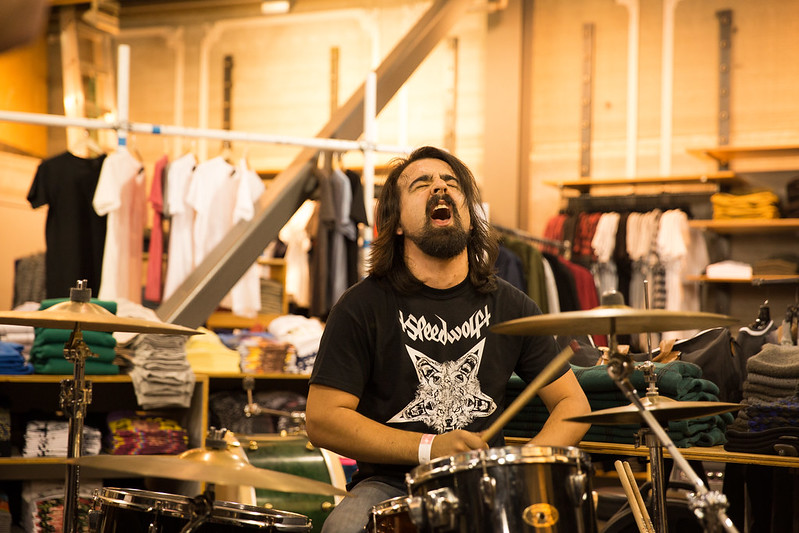 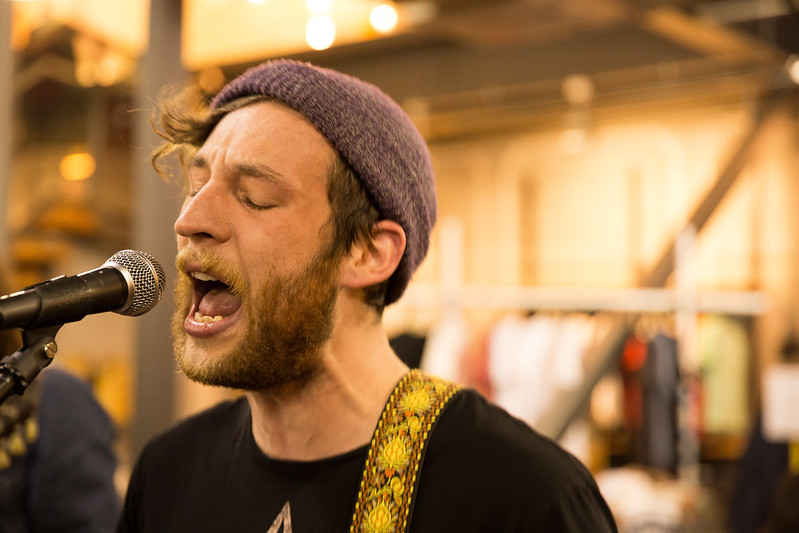 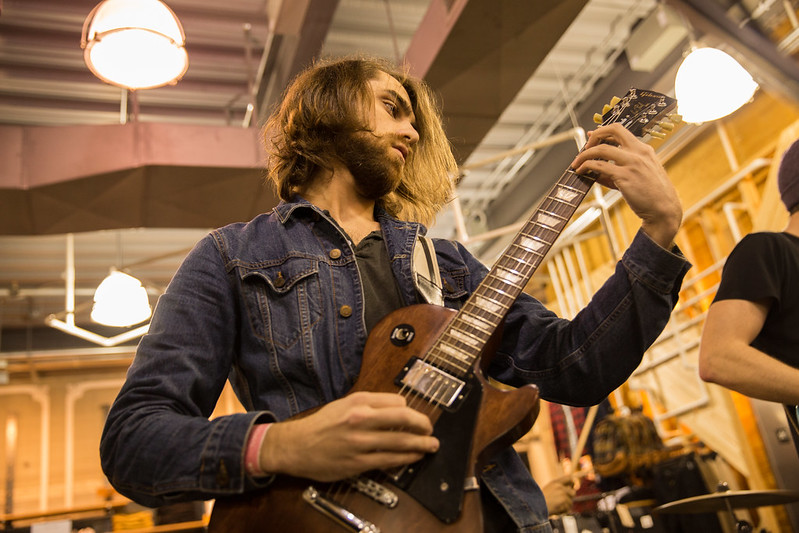 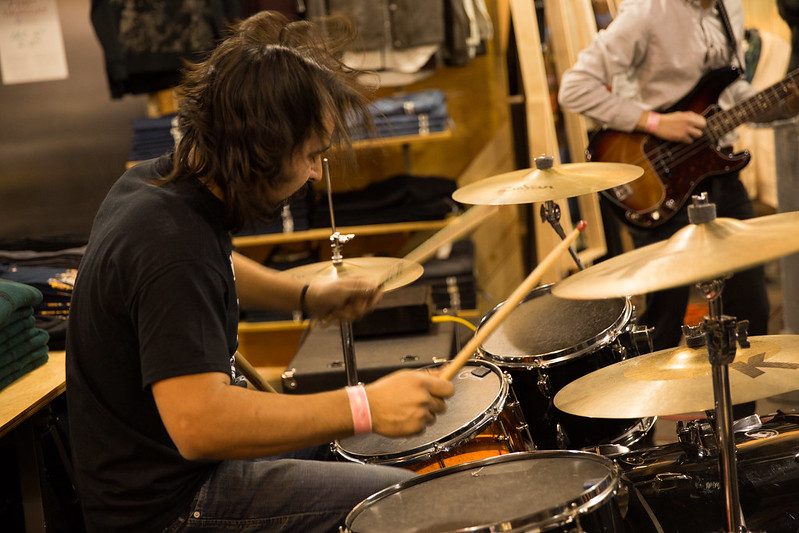 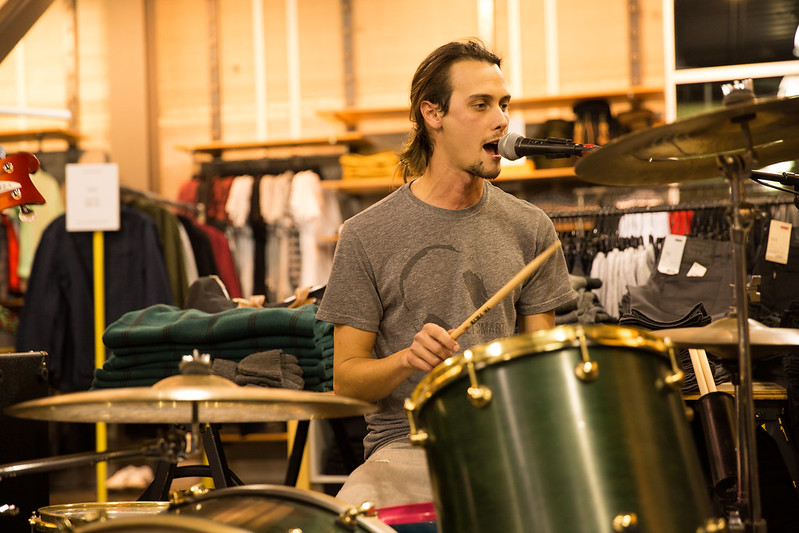 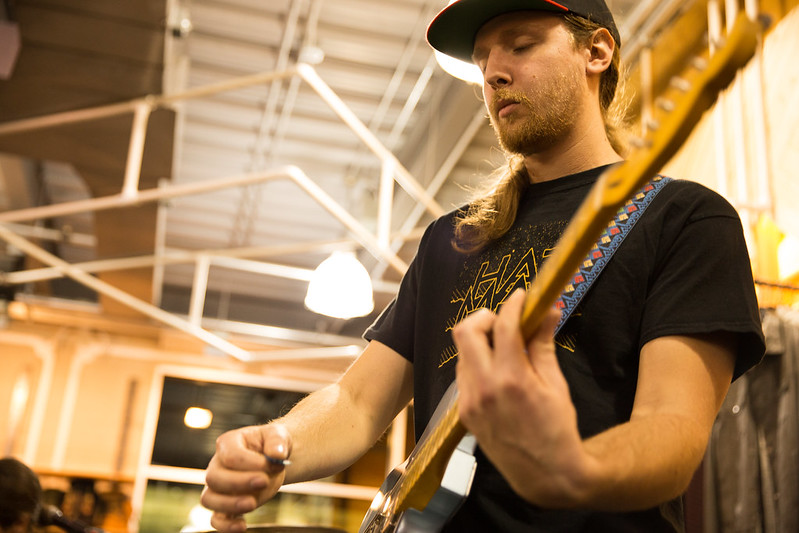 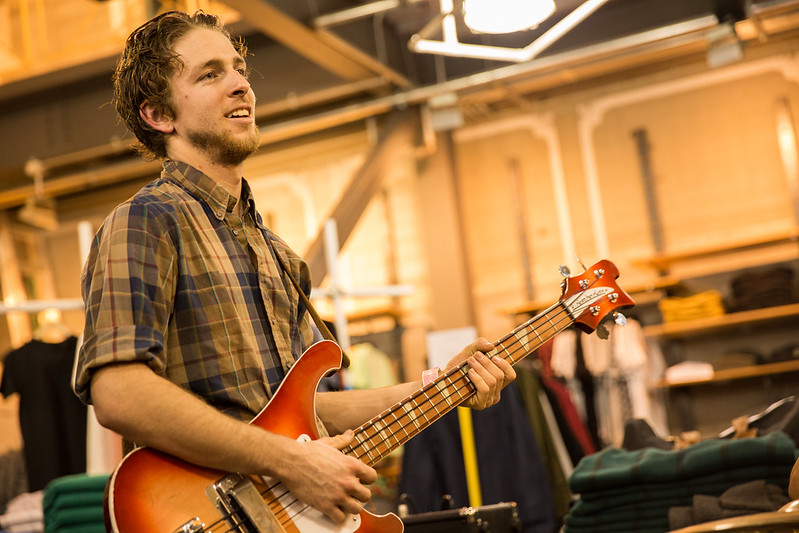 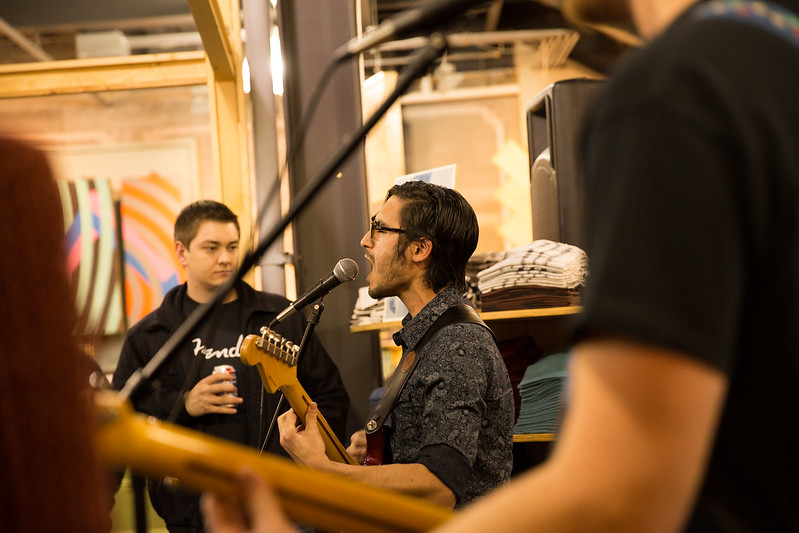 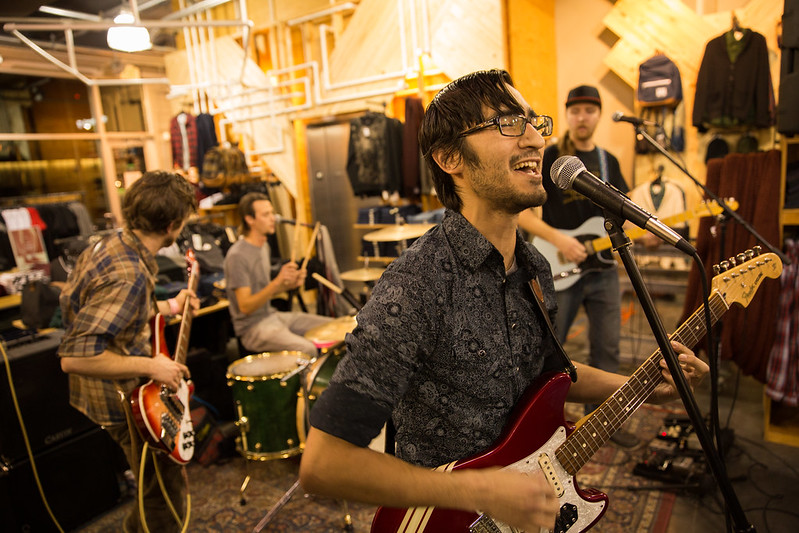 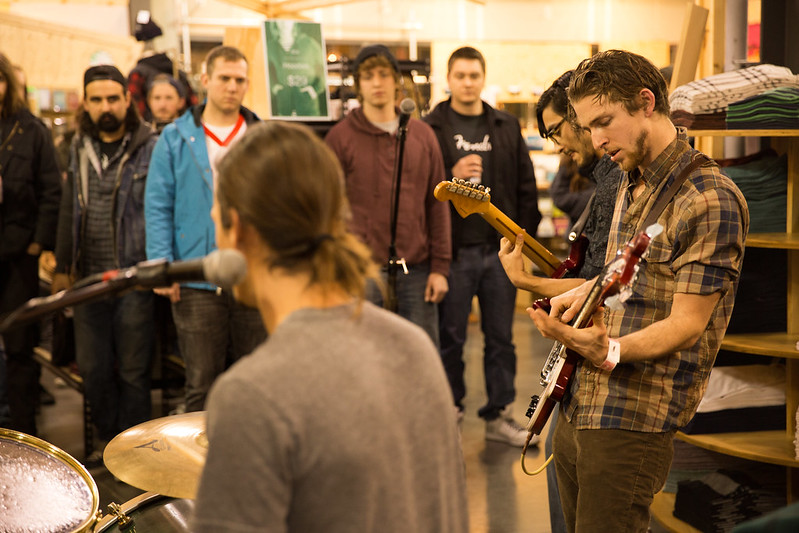