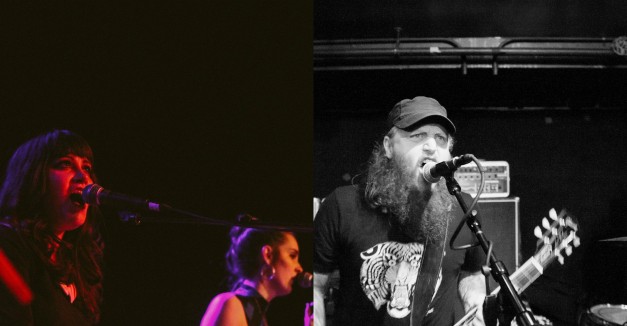 This week’s set of Hear Omaha and Hear Lincoln shows bring two bands on opposite ends of the rock spectrum.

Blue Bird is in the midst of a makeover of sorts. For most of its history, the folk act has had a rotating cast of complementary musicians, peppering its easygoing pop with strings, keys and harmonies. It now comprises a core quartet of guitarist Vince Giambattista, bassist Matt McClure, drummer Rob Mathews, multi-instrumentalist Becky Smith and vocalist/keyboard player Marta Fiedler. Blue Bird’s focus has turned toward electronic indie pop, incorporating more synth and effected guitars.

Lincoln rock quartet Laughing Falcon, on the other hand, guns for flat out volume. While “loud” itself isn’t an instrument, the “loudest band in Lincoln” moniker has stuck to its thunderous, screeching guitar rock. The foursome of frontman Kevin Chasek, guitarist Matt Kaminski, drummer Nate Christiancy and bassist Kyle Gibson just finished an EP and is working on its release.

Below are Q&As with each of this week’s acts. We chatted with members of Blue Bird about their evolving sound, memorable tour experiences, and the importance of well-balanced melody. Chasek commented on Laughing Falcon’s volume reputation, the new EP and a peculiar piece of Christiancy’s performance attire.

Blue Bird plays Hear Omaha tomorrow at noon at 13th and Howard (RSVP here). The ten week concert series is made possible by support from the Greater Omaha Chamber of Commerce and, this week, State Farm Agent Grant Mussman.

Hear Nebraska: What’s new, and what should HN’s audience keep its eyes and ears open for in the near future?

Marta Fiedler: We tracked an EP with Eli Mardock last summer and are just waiting for Eli to finish working his magic. But that should be coming around the bend here any time now. In the meantime, we’re writing and working on new songs. I think we’re planning to do another EP pretty quickly after this one.

HN: What lineup will we see at Hear Omaha?

MF: The Hear Omaha show will have our normal lineup — Vince, Rob, Matt and myself — however, we will be missing our back-up vocalist and synth player, Becky Smith, as she’s in Costa Rica this month doing Spanish immersion.

HN: What’s the most important thing you’ve learned about melody, as a tool/concept, in 5+ years of writing so many hooky ones?

MF: The melody question is interesting to me and is definitely something I’ve thought a lot about. Melody is something that’s always come really naturally to me. I am always daydreaming in real life, often humming to myself as I walk around in my own little world. I record the melodies I come up with on my phone and then later try to put lyrics to them. That’s definitely the more difficult part for me — the figuring out of what I want to say. I think when I started writing music at 17, I was so heavily influenced by singer-songwriters like Leonard Cohen and Bob Dylan that I would get really caught up in trying to be lyrically impressive and sometimes forget about melody. Lots of my early songs didn’t even have choruses. Writing and playing with this band has really helped me to keep a consistent focus on melody across all instruments. We definitely go for that balance between catchy melodies and (hopefully) meaningful lyrics — where the two aspects interplay and work together — rather than one being more significant or prominent than the other. Ultimately, we want to give our listeners something they can sing along to.

Vince Giambattista: My opinion is that you can never have enough ‘melody’ in your music. I don’t write 100 percent of the parts I’m playing … a lot is collaboration. But when approaching an idea … I try and apply a melodic thought process to whatever I’m composing, writing and/or contributing to our songs and music. Melody is … a very important tool for us. That being said, we also are very methodical about where certain melodies belong and what’s best for the song as a whole. Making room for songs to be able to breath and move along and not bog them down with too much.

HN: What was the most meaningful experience you guys have had on a national tour? You’ve been on three? Four?

Rob Matthews: I can’t really say we’ve been on a national tour. We’ve done a few East Coast runs and quite a bit of regional play around the Midwest. We’ve never been west of Denver or say, Laramie, Wyoming. We haven’t done any touring or even regional play for the last few years though, because we haven’t had any new music released. “Touring” is actually a funny term to me. When I think of that term I think of, like, Metallica out for two years or something. We’ve just played some shows in Pittsburgh, New York, etc. … Some of the smaller town shows can really be the best. We’ve played to great crowds in Sioux Falls and seen and met some really great/crazy people in Dubuque, Iowa. As far as big cities go, Chicago has been great. We’ve had the opportunity to play the Double Door a few times and that’s always a blast.

MF: One of the most memorable times I had on tour was when we had a beach day in Ocean City, Maryland, on the 4th of July. We spent the day in the water, getting thrown around by the waves, falling on our butts and laughing, eating funnel cakes and milkshakes. It was definitely a time for us to let loose, shake off some of the stress and exhaustion of the road. There was this fireworks show over the ocean from this barge that was pretty spectacular. It was exactly what we needed about halfway through the tour to get reinvigorated for the next leg.

HN: You’ve begun to meld electronic sounds into your songs. [So it says in your bio.] What kind of complementing role do those tones play with regard to folk music? (OR) Was there a particular influence that jumpstarted that?

MF: We’ve actually moved almost completely away from the folk/Americana sound of our first two records. Our new songs are very indie pop influenced — more synth leads and spacey guitar sounds, some programmed drums in addition to our live drums. I used to play acoustic guitar on quite a few songs, but now just stick to the keys, though I might start doing some electric guitar in the future. Our feeling was that we’d already made two folky records. We didn’t want to repeat ourselves. We wanted to experiment with a new sound and so I [began] writing songs that would fit the newer style. I think that enough of what we do well is the same. I don’t think the change in sound would be disorienting for people who’ve only seen us years ago. And we’ve had really positive feedback from folks about the new songs, so we feel pretty good about the progression of our sound. And that’s what it is — a progression. It’ll likely continue to be in the future. We’ll make a couple of pop/electronic records and then maybe try something else. Who knows? Becky and I have toyed with the idea of a death metal side project called Dead Bird.

Hear Nebraska: Ordinarily, this wouldn’t be a question, but in Laughing Falcon’s case we’ve heard it from enough people (and seen it ourselves) … “Laughing Falcon is the loudest band in Lincoln.” True? Untrue? A compliment? Do you guys aim to be a certain kind of loud?

Kevin Chasek: We haven’t had any decibel ratings, so I wouldn’t want to hold any claim to any volume title. But as far as how volume plays into the show, I feel like it’s a must. I want people to literally feel the music. I want it to consume them. That’s the idea anyway, to overwhelm people with the sound. When you couple that with the intensity of how we try to play, it can be a very heavy experience.

HN: Last we heard, there was a record in the works? How’s that coming along?

KC: We’re done with the music end of it. We recorded with Charlie Johnson at Fuse Studios here in Lincoln and mastered it with Doug Van Sloun at Focus Mastering in Omaha. We’re really happy with the album and feel like it represents the songs and our live performance well. We’re just finishing up on the art and layout, and it’ll be done. Not sure yet if it’ll be independently released or if a label will be doing it for us.

HN: What’s your fondest memory of playing in Wasteoid? Anything specific come to mind?

KC: That was a really big part of my life. Eight years of brutality. It’s all kind of a blur. But my fondest memory will always be the fact that we chose to play music the way we wanted and actually created a name for ourselves as a band.

HN: Does Nathan [Christiancy] wear black drumming gloves for grip or just to look like he’s capable of anything? Perhaps, both are true.

KC: The dude hits really hard. I mean really hard. He’s kinda like Captain Caveman. He beats the crap out of the drums. So there’s a bit of protection that they offer. But he does like the fact that he is tactically prepared for whatever. 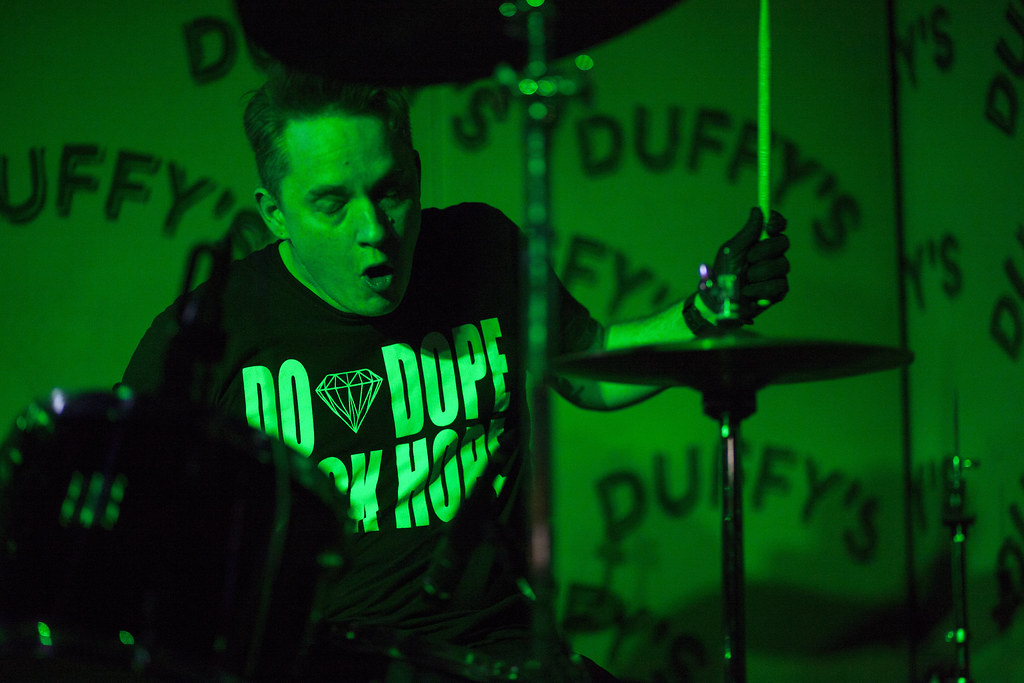 HN: What should HN’s audience keep its eyes and ears open for in the near future?

KC: Obviously the album is on the horizon. Probably a single or two beforehand, and we’re working out some video details. We’ve got a couple of shows out in Chadron the second weekend of July, where we’ll be sharing the stage with the Crazy Louie Band. And in the not too distant future some small scale touring, just getting started on that front though. We’re just getting started! 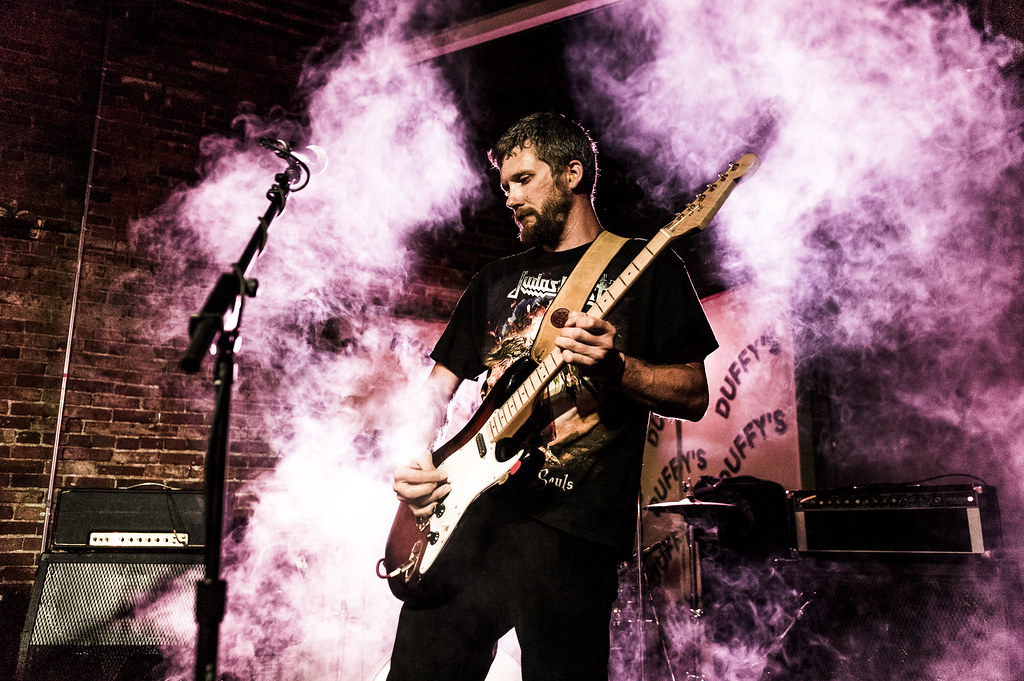 [Editor’s Note: The above interviews have been edited for clarity and concision.]