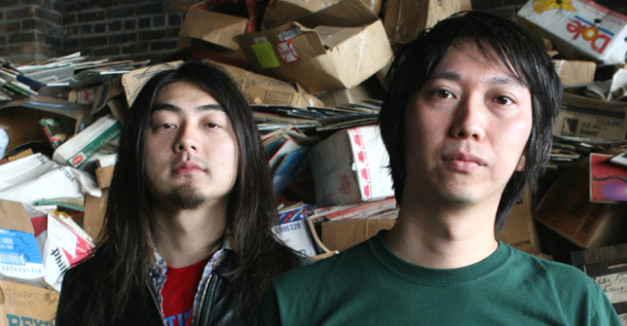 Editor’s Note: Ryan de la Garza is a chief member of the Omaha comedy group OK Party Comedy, and a co-owner of Lookout Lounge (the recently renamed Hideout). Find him on Twitter at @ofthegarza.

When you hear the term “birthday suit” you may imagine a naked newborn, loud and writhing, tolerable only for short bursts. I don’t know how Minneapolis rockers Hideo Takahashi and Matthew Kazama derived their band’s name, but based on that image I have a pretty good guess.

While Birthday Suits are by no means new – they recently celebrated their tenth year as a two-piece – they have the onstage energy of kids on Coke. As for volume: these guys are loud. Their sound is often described as a “sonic assault,” though fans like me tend to think of it as a sonic embrace, like when a tall friend hugs you firmly around the ears.

Their most recent release on Recess Records is Spin the Bottle: Adult Party is a speedy nine-track effort clocking in at just under 17 minutes, so even if they’re tolerable for more than a short burst, Birthday Suits only ask for a little of your time to make an impression.

The following is an exchange I shared with Takahashi who sings and plays guitar. Kazama – the drummer/vocalist – was unfortunately unable to attend the email interview.

Hear Nebraska: Hideo, you’ve described your sound as, “Loud music you won’t like,” but you seem to have a lot of fans, including myself. What’s wrong with us?

Hideo Takahashi: Well, nothing wrong. If I don’t think you actually listen to good music, the answer will be, “Loud music you won’t like.” People like you, I would describe as mix of punk, garage, noise and indie rock. I bet you still have no idea what we sounds like with the description. Then, I would say, “Why don’t you come to see us?” We won’t disappoint you.

HN: You’ve said that bands like the Teengenerate heavily influenced your sound, but that you didn’t discover Japanese punk rock until after moving to the U.S.

What other Japanese music or pop culture did you discover only after leaving there that Americans probably act like they invented?

HT: I discover so many great Japanese bands after moving here, such as Guitar Wolf, Registrators, Total Fury, Gasoline and Melt Banana.

HN: What bands are you really into right now that you’d like to go on tour with and steal the show from?

HT: My favorite bands has been the same for last 10 years or so, The Marked Men (or any bands they are involve Radioactivity,  Mind Spiders and High Tension Wires) and The Blind Shake. We are great friends with the both bands and have toured with them before, but they are so good and I could spend more time with them.

HN: Birthday Suits are known for their high energy live shows. Do you find that audiences tend to match that energy or do they just stare longingly as if into the abyss?

HT: Most of people [who’ve] never seen us before, they tend to stare us to try to figure out what is going on. I think those of you have seen or listen to our music, I think they have the same level energy with us. For the trues, I don’t watch [the] audience much while we are playing, so I don’t really know the answer.

HN: You’ve said that you don’t really care if fans can understand your lyrics because the music speaks for itself. Have you ever thought about recording an album in Japanese or that language British people speak?

HT: I personally think English would fit better than Japanese for the kind of music we play. I don’t care if people understand my lyrics or not, but I still care what I sing. I try to make good lyrics as much as I can and song titles.

HN: When you’re on the road do you prefer to stay in hotels or with locals? What advice would you give to people who want to host bands in their homes and avoid a hilarious lawsuit?

HT: If we have friends in that town, we stay at friend’s house. Otherwise we prefer staying at hotels. Many of my friends’ bands stay with me when they come to my town. I make sure to have enough beer for them. I also offer them to use washing machine if they need to do laundry. Next day, before bands head to next city, I take them to good place for lunch.

HN: You’re a self-described music geek and Matthew considers his tastes “eclectic.” When you’re in the van together picking something to listen to, are there any bands that the two of you absolutely disagree on? Feel free to use code names if you’re worried about setting off Google alerts. (Example: “The Be Tulls”)

HT: When we are on the road, the driver gets to pick music. We like most of each other’s music so I can’t think of any bands we dislike.

HN: You’ve played in Omaha a few times now. Is there anything you look forward to doing or seeing when you’re in town? Follow up question: Will you go to the zoo with me?

HT: We still don’t know Omaha that well. So any places locals suggest, I would love to go. If it’s the zoo, then I would love to go to the zoo. However this time, we are doing one-off show. We will probably get there right before the show starts.

HN: Some people I know and am also married to would rather listen to a band’s album than see them live because “It’s the best they’ll ever sound.” What would you say to someone with such an opinion to convince them to see your band live?

HT: I would say come to see my band. I’ll make you smile or cry. I’ll give you the money back if you don’t enjoy. But I’ll not give you money back, so please don’t ask.

HN: I listened to all three of your albums on Spotify in one day and eventually all of the targeted ads were tourism spots encouraging me to visit Minnesota. Traveling there means I have to visit my wife’s family. What should I do?

HT: I recommend [going] to a Vietnamese restaurant with your wife’s family. We do have many good restaurants here, but Vietnamese food here can’t go wrong.

Based on these responses, Hideo Takahashi of Birthday Suits is clearly a respectful host who’s great at giving advice. If you want to see how those qualities translate to musicianship, be sure to attend his band’s show in Omaha tomorrow night at Sweatshop Gallery. Bring ear plugs.