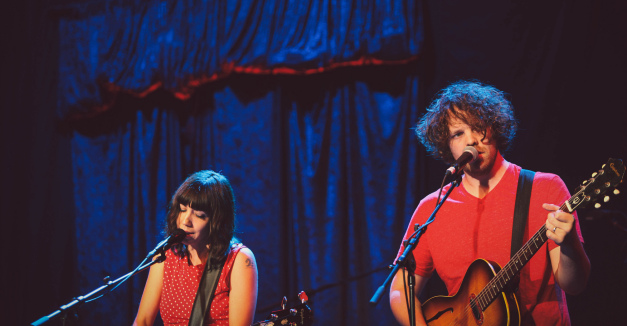 What are the chances. That an Omaha album, the third-ever release from Lumberjack Records (which would later become Saddle Creek), would find its way to a small L.A. band called Jay Lewis.

That Jay Lewis would embark on a tour in 1996, during which its Stefanie Drootin-Senseney would fall in love with the album, Dead Space by Slowdown Virginia.

What are the chances that a Jay Lewis show would fall through, and that Slowdown Virginia’s Tim Kasher — who at that time had recently helped form Cursive — would host Jay Lewis at his house in Omaha instead.

Maybe the DIY scene in the mid-’90s was simply that tight-knit. Or maybe the chain of events was little more than happenstance.

In retrospect, though, following the early 2000s success of Cursive, and following the later formation of Drootin-Senseney’s band Big Harp, with her husband, Chris Senseney, let’s be more imaginative. How about we mark it as a piece of Nebraska music mythology? 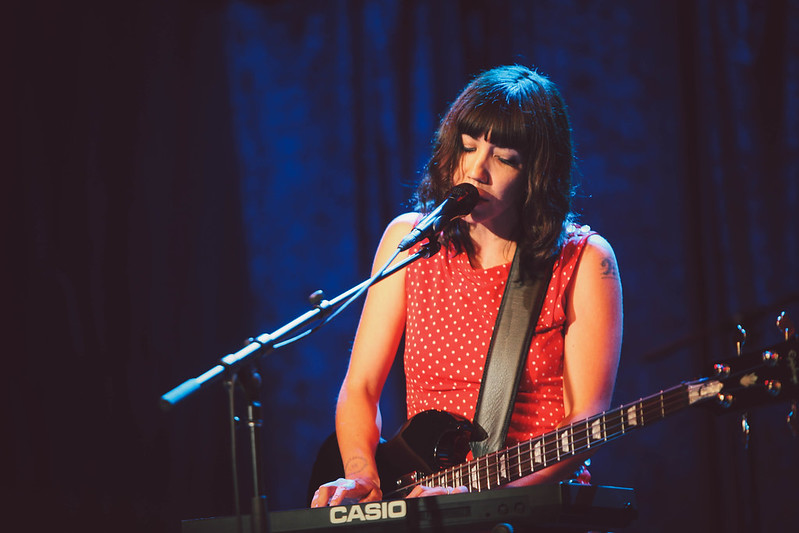 That first night at Kasher’s would spawn a friendship, which led him to record Jay Lewis. When another of Kasher’s bands, Commander Venus, would play L.A., they’d stay at Drootin-Senseney’s. She’d play the Cog Factory when she came through Omaha, and would keep in touch with the burgeoning Omaha scene.

It was on a Good Life tour that Stefanie and Chris — a Valentine, Neb., native who then played with the tour-accompanying band Art in Manila — would establish a relationship that has led to children and a marriage.

And thankfully, the fairytale has continued. Stefanie and Chris’s band Big Harp plays with The Good Life and Oquoa this Saturday at The Waiting Room. Find tickets for the 9 p.m. show here.

Having moved from Omaha back to L.A., and having welcomed Daniel Ocanto to the band on drums, this Saturday’s show marks Big Harp’s first in Omaha since a performance at the 1200 Club, for a Hear Nebraska-NET event. That was June 2013, just five months after the band’s second album, Chain Letters, was released.

Including near steel-driving songs like “Some People Are Born Strange,” spastic solos, and a vocal melisma that extended in tons of melodic curlicues, that album was a more soulful, distorted complement to their more subtle and subdued first record, White Hat. But even in June 2013, upon the small stage in the Holland Center, the two had moved toward something else entirely.

That constant evolution of sound is something Big Harp doesn’t suppress.

“It’s hard because we feel bad for Dan (Ocanto),” Stefanie says. “We don’t play old songs. The good thing and the bad thing is it’s so much a part of us that we’re not good at faking what we’re doing.”

Perhaps, too, that evolution is sped up by Chris’ chameleon songwriting, which proved its adaptability on 2013’s soundtrack to the romantic comedy Stuck in Love. The band had answered the call of friend and Nebraskan Mike Mogis, who helped compose and curate the score: They wrote a song, only this time it came without the “sarcasm or bite” Stefanie says Chris often includes.

After writing about 30 verses, Chris edited the song, “At Your Door,” down to a sweet, honest sentiment that gathers around a refrain of “I need you, and that’s all.”

“He’s always writing,” Stefanie says. “You’ll be in the middle of a conversation and his eyes will drift off.”

Now, the band prepares for a 2015 release of its third album, produced by John Congleton, whose discography includes St. Vincent, Polyphonic Spree and The Thermals. It’s an offering that Stefanie says includes some driving punk, a bit of synthetic drums and a diverse array of moods, “in Big Harp nature.”

The band oxymoronically and precisely describes “Numbers,” the first track premiered, as a song that “combines the clinical precision and harmonic elegance of an after-hours karaoke party with the spirited slop and loose raggedness of the best department store jazzers.”

And in case that doesn’t sound like a tangential foray from their previous material, don’t worry. Just this month, Big Harp entered the studio again to start on a fourth record.

“We have 10 songs we haven’t recorded yet that are not on the John Congleton record,” Stefanie says. “It’s such a long process to release a record anymore, and we don’t stop writing.”