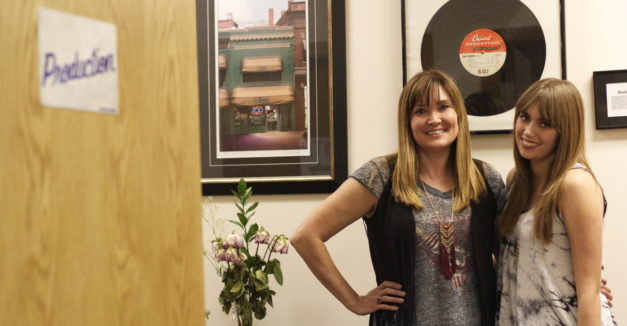 [The following introduction was read live on-air at the KZUM studio before Belles & Whistles’ in-studio performance. Tune in every Monday night at 8 p.m. for Hear Nebraska FM. Listen via 89.3 FM in Lincoln or stream via kzum.org.]

If one wanted to trace the roots of Belles & Whistles’ twangy harmonies, quality songwriting and wide-appeal potential, one would probably peer back into the history of this Omaha mother-daughter duo’s more experienced half, Jaymie Jones.

The year was 1999, and Jaymie and her sisters had moved to Los Angeles to sign their very first record deal. Nashville-based MCA, a Universal Music Group precursor, had plucked them from Nebraska, favoring the siblings’ vocal chemistry and acoustic country sound. Their first record begat a top 25 single “Harmless” and European and American tours.

In 2003, just before the group was to cut its second record, MCA folded into Geffen Records and their contract dissipated. The sisters went their separate ways and it would be a few years before Jaymie would once again get the itch.

Her return would be a tale of reincarnation rather than redemption, as her second turn would feature not a sister on the melodic end of a blood-born harmony, but rather her daughter, Kelli. Beginning as the backup to Jaymie’s lead in 2013, Kelli has since brought her crisp, dynamic soprano to center-stage, at her mother’s constant encouragement.

Taking clear influence from the likes of Dolly Parton, the Eagles, Carole King, Emmylou Harris and The Judds, Jaymie and Kelli have developed a brand of country that sits among its contemporaries as well as its past. Kelli’s voice is rangy, suited to a starlit ballad, an anthemic round-up or a swashbuckling cover (think “Goodbye Earl”) naturally and effortlessly. Jaymie’s veteran presence weaves its way throughout to provide a steady compass.

The result has been a handful of festival appearances (Lincoln Calling, Benson FFFF), opening slots for Kenny Rogers, the Oak Ridge Boys and John Michael Montgomery, Omaha Entertainment and Arts Awards trophies for Best Country in 2014 and 2015 and now, a debut album Look Up, out this Friday at a [full-band] show in Ralston (Bushwacker’s Saloon — RSVP here).

To preview the release show, here’s Belles & Whistles with “Fire”:

Special thanks to Brent O’Neill for in-studio audio assistance.