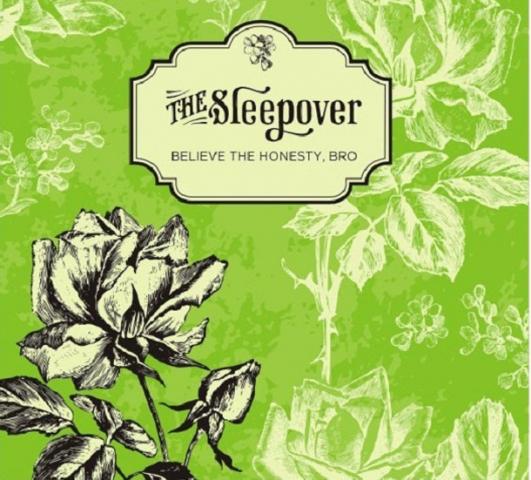 The latest release from Lincoln’s The Sleepover, Believe the Honesty, Bro EP is the follow up to the band’s debut full-length, Oceans of Ice, Island of Terror. And though it is a four-song EP (plus a beautiful, Rachmaninoff-esque piano etude to make five), it is a stronger representation of the band as a whole than their full-length effort. The songs are overall more concise and poignant.
The record has a darker underlying tone while still maintaining the pop sensibilities that lead singer (and HN contributor) Cory Kibler’s voice offers itself to oh-so-well. They managed to build off of the vibe of my favorite two tracks from the first record (“Island of Terror” and “Now We’re Talking”) while incorporating more keys and syncopated drumming, without losing focus. I can only assume that came from growth over time as band, as well as a couple new members.
A track like “I Get What I Ask For” takes a cutting and angular guitar riff and builds a stunning pop tune around it, while the even-keeled “Flawed Autonomy” plays with tension and release, keeping the listener waiting with bated breath. The jangling guitar work on “In Circles” and at moments during other songs reminds me of early Beat Happening.
With this release, the Sleepover has laid the groundwork to fully showcase what their future has in store.
Brendan G-W is a Hear Nebraska contributor. He also drops the funkiest of funky ass bass lines in The So-So Sailors. Contact him at brendan.gwalsh@gmail.com.