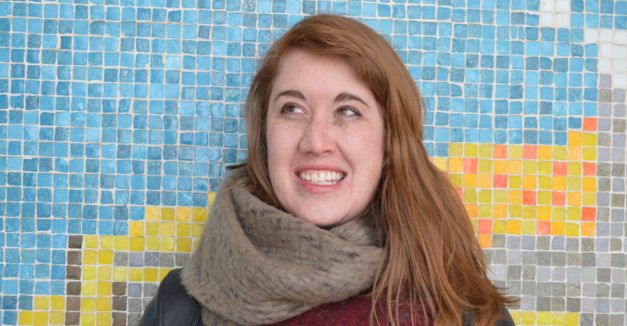 If there’s one representative example of the cleverly candid pop on Kait Corrado’s (née Berreckman’s) sophomore record, it’s “Keep It Up.” It whimsically charts the practice of “getting over you” — faking the accent, forcing the smile, feeling under-qualified — like an occupation. As the voice considers throwing in the towel, a vocal chorus swoops in to uplift, keep it up, keep it up, as if begging her to stay afloat.

On Battle Scenes (out today), the listener is privy to these detail-rich vignettes of nervous energy, internal struggle and social commentary. Each scene is filled with routines or habits or coping mechanisms you can see yourself slugging through to last the day. Letting go can be as painful and quick as yanking your tooth out via door and string. Getting over someone is as easy as forced cheerfulness. Dates can start once a few times around the block settle the butterflies. What makes this record so relatable is that these situations are hyper-specific while their feelings so instinctively familiar.

In that service, Corrado’s signature style is present in Battle Scene’s construction as well, amplifying the emotions of each track via instrumental craft. The twangy harmonies convey the fatalism and anguish in “General Electric.” “Night Owl” — a familiar, formerly acoustic track — simmers in both passion and frustration. The losing-my-s___ guitar solo in “I’m Fine” betrays the title’s insistence. And the backing ensemble in “Keep It Up” is the subject’s chorus of angels urging her on to recovery.

So in that way, the record is about survival, pressing oneself into emotional duty because the moment demands it. Because the only acceptable result is keeping one’s body and mind intact if it means limping for a while afterward.

Listen to our On The Record podcast team review Battle Scenes below, and catch release shows tonight at O’Leaver’s and Thursday, Aug 25 at Duffy’s Tavern.

Catch up with the latest On The Record episodes with our playlist below, which includes releases by Bogusman, Big Thief, Jack Hotel, Powers, Josh Hoyer & Soul Colossal and more: