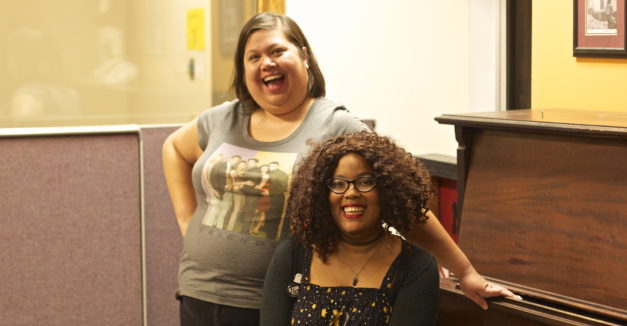 So it goes: “Two girls from the Midwest had a lot of stuff on their minds. Then they had a bleeping awesome idea. They would share their thoughts online.”

“They” are the Badland Girls, the Omaha musical comedy duo of Rhea Dowhower and Destiny Sturdivant. It all started as a bi-weekly “junk culture conversation” podcast in January 2012, tackling challenging, progressive subject matter and difficult social issues as thoroughly as they do vampires or the latest Star Wars sequel, piling up 127 episodes to date. Recent podcasts have covered everything from Beyonce’s Lemonade and the Marvel Cinematic Universe to Omaha Zine Fest and Iggy Pop — and, as of late, a healthy dose of acclaimed 2015 Broadway production Hamilton.

Soon after the podcast’s founding, the dynamic duo leapt out of the monitor/phone/whatever and into a whimsical, fearless musical embodiment of all things feminist and all things nerd. The form is simple: two soothing voices and one ukelele. But Dowhower and Sturdivant, two fearless, unabashed humorists and clever thinkers, squeeze the most out of it. The shorter form means sharper, quicker takes. And as with early track “Restraining Order,” the bones of these songs are sturdy and rich enough to be instrumentally filled up and souled out or, as you’ll hear tonight, to fly on their own.

So if you like a bit of irreverence with your intersectional feminism, welcome to the Badland Girls, on Hear Nebraska FM, starring Rhea D and Destiney, here’s “Snapchat Cat”:

Special thanks to Mark Wolberg for audio assistance.