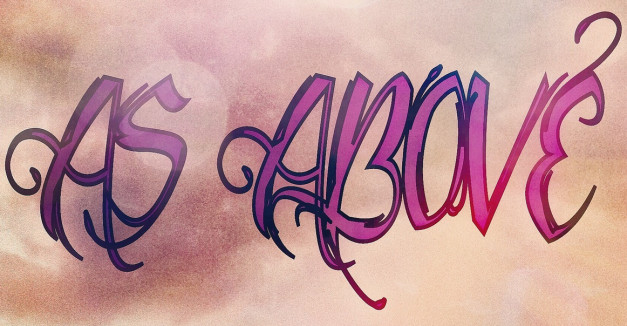 Sleep Sinatra’s work tends to linger somewhere in a colorful fog of conspiracy, enlightenment and emptiness.

Your door to the Lincoln emcee’s new EP, As Above, is the simply titled “As Above Intro,” where it sounds like EP producer Ichiban Hashface has sampled the first two notes of a bombastic nature documentary score. The fragment taps out a haunting prettiness, while Sleep mumurs about how life’s pieces are programs, psychonauts and Skynet.

In the EP’s five songs, you find the fundamental pill and paradox in Sleep’s music that must be swallowed for its both bizarre and familiar world to arrive in focus. Fittingly, the album’s record scratches sound more movie-scene-closing wipes, variations on space and perspective.

Always lyrically impenetrable, down the pill, and Sleep’s songs work as someone telling you the secrets of the universe mid-dream. The most you can take with you upon waking is the scape: the gentle imprint of the words, not their meaning.

And that imprint is the point. The lyrics are undeniably complex and lithe, but they ascend from a maternal feeling of alienation. Take far-of-field spiritual control, when the concrete world refuses your agency.

On Ichiban’s end, the EP makes ample digital use of the piano’s physical quirks, sampling around ringing jazz chords in a way that makes the instrument’s beautiful polish seem fragile and rickety just beneath the grand piano lid.

Listen to the five-track As Above here:

For more on Sleep Sinatra, our podcast team reviewed his 2014 full-length, Monsters and Children. Listen below.