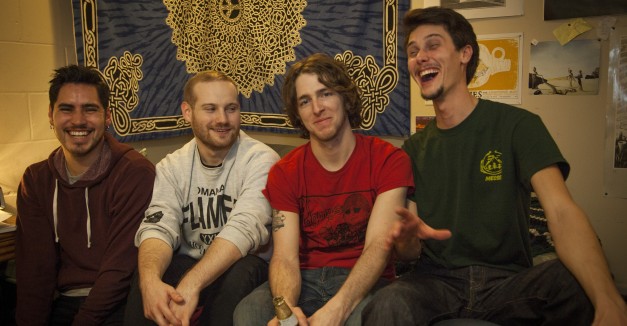 When Timecat strikes out on the road next week, its members will possess full range of motion in all limbs. That’s more than they can say for their last go-round.

Guitarist Jay Jacobson braved the Omaha prog rock band’s previous excursion with a broken collarbone. Down a guitar, it forced the band to adapt and improvise, necessary skills to have for DIY touring bands. And they still enjoyed themselves.

“It was the best time I could’ve possibly spent with a broken collarbone,” Jacobsen says.

Timecat formed around 2009, when Jacobson and guitarist Matt Thomson starting jamming together. The two had spent years playing around Omaha in heavier punk bands, but were looking to explore different sounds.

The band says that while it’s had its share of difficulties fitting in with the Omaha scene, it has continued playing around town while looking at out-of-state options. Touring connections from last July’s Midwest tour have facilitated the Timecat’s upcoming trip through Illinois, Iowa, Minnesota, Michigan and other surrounding states.

“It feels great to play in front of a new audience,” says drummer David McInnis.

We sat down with Timecat at a recent practice to get the scoop on its formation, its tour misadventures and the struggle to find a place in the Omaha scene.