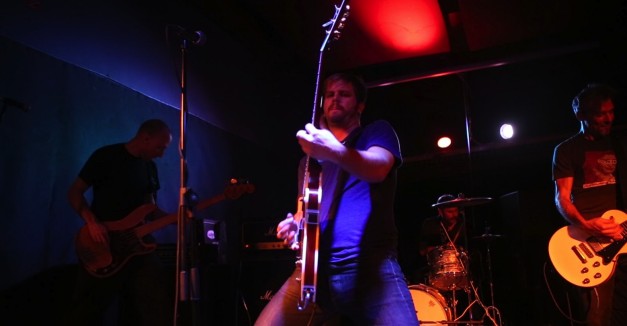 When Red Cities frontman Byron Anway steps onto the stage, his focus is on activity. Befitting of the band’s fast-paced rock, he flails and screams into the mic, expending every ounce of rocket fuel in his tank.

He puts his philosophy more succinctly:

“Just between you and me, I’m a fucking freak,” Anway says.

Over the last two years, from debut seven-inch Build It Up, Tear It Down to last summer’s Modern Peasant Records self-titled LP, Red Cities has aggressively carved its spot in the Lincoln hard rock scene, marked by Anway’s and Matt Bokovoy’s screaming, breakneck guitars and the thudding rhythm section of drummer Josh Leeker and bassist Eric Aspengren.

Throughout that time, Anway cites the Lincoln music scene’s insular nature, in which musicians support each other, as a positive for networking. Since arriving in town to attend graduate school at the University of Nebraska-Lincoln, Anway says he’s met the music scene “one person at a time.”

However, night in and night out, he says artists largely comprise the concert-going audience. There’s a genuine curiosity around the scene, but implicit is his urging for non-players to get out to shows. After all, “[People] feel more enthusiastic after they’ve seen a show.”

In our latest artist profile, we sat down with Anway at a recent Knickerbockers show to talk about his bursting (though not unlimited) stage energy, Red Cities’ place in the Nebraska music scene and playing both active and supportive roles with other artists.