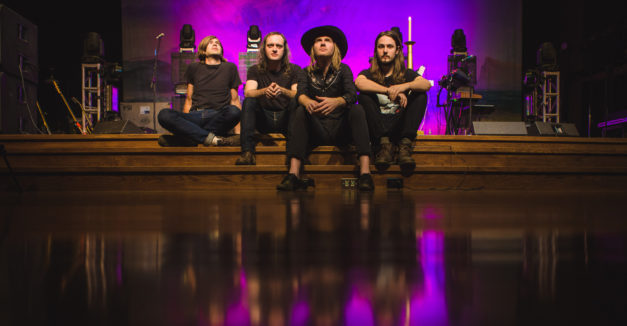 [The following video interview highlights The Faint’s current nationwide fall tour, which culminates Monday, Oct 31 at Sokol Auditorium with Gang of Four and Pictureplane. RSVP here and show up in your Halloween best.]

Throughout its two-decade career, The Faint have made its modus operandi to push visual and aural boundaries, all while keeping fans dancing at a sweat-inducing pace. Punchy rhythms, pulsing synth and strobing lights are signature aspects its live ethos, and a major reason why it remains a beloved Omaha act.

According to Todd Fink, the dance punk band’s frontman, that vision has taken quite some time to develop. As its members hone in on new techniques and new technology, the show has progressed gradually over time. Drummer Clark Baechle has been at the head of the band’s visual department, ensuring the musical and visual lines meet.

As with The Faint’s evolving live show, its career-marking retrospective CAPSULE: 1999-2016 — which dropped Sept 30 on longtime label Saddle Creek — combines a veritable setlist of its own favorite hits like “Glass Danse” and “Worked Up So Sexual” with new tracks “Skylab1979,” “ESP,” and “Young and Realistic.” The result is a kind of checkpoint that reminisces on the mid-aughts Omaha heyday and glimpses a new direction as the band pushes forward.

“Part of you wants to stay true to what the original vision was,” Fink says. “And another part wants to go forth into the future in a scary way that’s brave and artistic. Finding that balance is what we’ve been doing.”

We dropped in on the band at its Omaha practice space in late September, as it prepared the final touches for the live act it’s currently showcasing on the road. Watch as Fink and Baechle give insight into the compilation album and chart the progress of its live act in the latest artist profile.