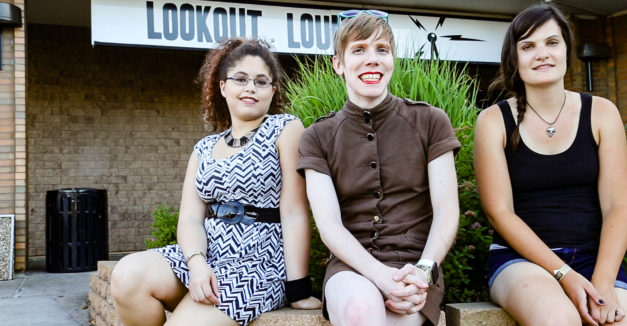 If what a band calls itself has any relevance to its ethos, The Boner Killerz have it down pat. Developed out of an online search and brainstorm session, it indicates an edgy and explosive yet enthusiastic attitude towards its often blistering and dynamic compositions. Perhaps more succinctly, as guitarist/vocalist Eris Koleszar puts it, it’s a way to “instill fear into men I don’t want to associate with.”

The Omaha feminist rock trio — comprising Koleszar, bassist/vocalist Cara Heacock and drummer/vocalist Anna Schmidt — is no doubt inspired by the riot grrrl genre, from where the band gets its strong lyrical explicitness and live performance spunk. But there is much more to The Boner Killerz than that. Elements of indie rock, metal and thrash find their way into the mix, and there is a joyful undercurrent of pop influence often surfaces (like with their cover of TLC’s busta-bashing hit “No Scrubs”).

After a recent Lookout Lounge show, where the band played alongside Omaha’s Culture War and Denver’s Screwtape, The Boner Killerz sat down with HN for the latest artist profile. Watch below as they discuss finding a name, their forthcoming six-song EP and the pride they take in playing in a band that isn’t “just all guys.”