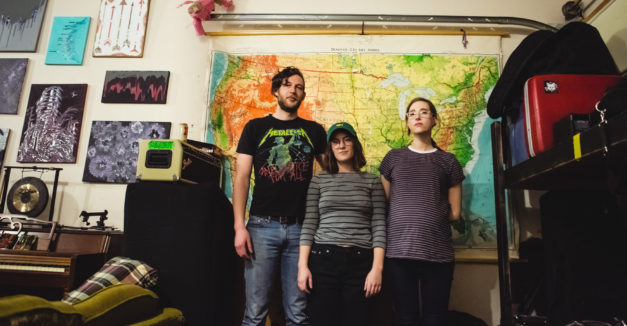 “Cute,” Morrow says, seated on a couch in the band’s practice space, a finger raised. “Not cute.”

That attitude informs much of Bien Fang — rounded out by drummer Nate Luginbill — and its players’ worldview, from its fuzzed-out sonic punch to its non-musical in-scene work. Morrow’s and Tomlinson-Dick’s songs take on sexism, inclusivity and the patriarchy and so too do their authors. The pair worked with Lincoln Exposed organizers this year to develop its code of conduct and, that same weekend, organized a benefit concert for survivors of sexual assault. Morrow organizes the monthly Inclusive Feminisms talk series at Indigo Bridge Books.

In both the music scene and community at large, it’s about elevating marginalized voices.

“I think we do a pretty good job of being a band that stands for something,” Morrow says.

On the cusp of Bien Fang’s album release show — Saturday, March 25 at Duffy’s Tavern — Morrow and Tomlinson Dick talked about its “bratty” brand of garage rock, scene inclusivity and encouraging aspiring young women. Watch it below: