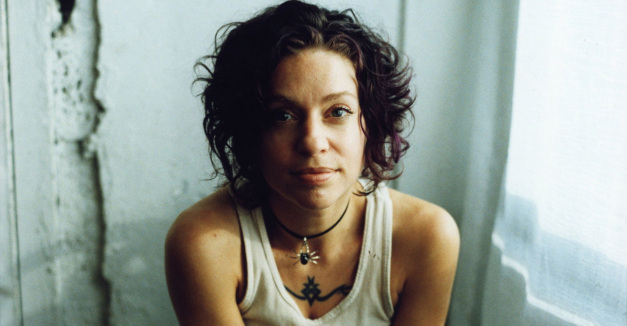 Singer-songwriter Ani DiFranco has been both an icon and a sounding board of feminist movements the last twenty years.

And seemingly, once that distinction is publicly made, it sticks. It’s not every artist that routinely gets asked in interviews: “So, how do we think women’s rights movements are going these days?” DiFranco is typically game for the discussion, defining how she sees patriarchy functioning in society. But the simplicity of those questions does little to address that, in penning 18 studio albums since 1990, her hundreds of songs don’t function as political or social status reports. They help chart the life of an artist and activist in the sense that it’s also the fluid life of a person whose opinions and beliefs have shifted course through reading, traveling, parenting and inhabiting a public spotlight.

The Grammy-winning songwriter’s tune hasn’t so much changed — though her musical arrangements have spanned everything from syrupy acoustic spareness to expertly choreographed jazz-rock — as she says age has endowed her with a broader field of vision.

DiFranco releases her latest LP, Allergic To Water, in November on the label she founded in 1990, Righteous Babe, to release her first album.

The songs are perhaps more capable than ever of pondering and questing for answers to enormous questions. “Why do the things we love hurt us the most?” for example, on the title track.

DiFranco tours through Lincoln for a stop at the Lied Center this Monday. Tickets here.

To preview the show, we caught up with DiFranco on the phone from her New Orleans home, discussing her forthcoming (and more mystical) album, Allergic To Water, as well as an emotional Edinburgh show and voicing a Greek goddess.

Hear Nebraska: The day I was first supposed to talk to you were actually in Edinburgh on the day the [Scottish independence] vote came out. What was that like?

Ani DiFranco: It was really interesting. The hotel we were staying at was actually a polling place, so we got to see people come and go all day long. And then we were onstage the next night when the results came in. I was surprised anyone came out to see an American sing. I said onstage, my one-sentence assessment, really, there seemed to be a lot of sons and daughters of Scotland mad at their mother and fathers. It was definitely a young-old split. But so complicated, you know! Then I was in England and hearing the ramifications from them. Fascinating. Of course, it’s never over.

HN: I’ve read you say that as your crowds have grown bigger and bigger, you’ve had to work harder and harder to maintain intimacy with the crowd. When you’re through Nebraska, you’re at a theater, what does working hard for intimacy look like for you?

AD: Well, the theater circuit is a pretty happy medium. At one time, I flirted with arenas in the mid or late ‘90s and that was not conducive to my art. I sort of change it up now between clubs and theaters. And I certainly don’t have to work for it too hard after interacting with my audience for 20 years. We’re quite intimate [laughs]. There’s almost an assumed intimacy now, wherever I go.

HN: That must be nice. I assume that was not always true.

AD: Indeed. It’s nice to be known. On so many levels.

HN: I wanted to focus on a few songs from the forthcoming album, Allergic To Water. The way the album kind of leads off with “Dithering,” it sounds like a song about a person juggling a lot. Not to accuse you of writing in the first person, but that seemed fitting for someone who has a had a lot in the air in recent years with family and projects and work. Where does that song stem from?

AD: Yeah, you see the basic terrain there. I actually am not the worst victim of the modern world. Many, many people are inputting a lot more on a daily basis. I don’t watch TV, but there’s just this flood of images and things that distract and steer your thinking and invade your dreams. I’m just guessing this talking to you, but I had a baby during the record and that makes you go inside your life and your home. Because the record was so much about that, maybe leading off with a song about “Whoa, I gotta tune out all the noise…” And then what better way?

HN: And then on the title track I’ve heard you tell the story of talking to a friend about the crazy things people are allergic to. And then how could you possibly live if you were allergic to water? But then I listen to the song, and it seems like more of an exercise in striving for empathy with that narrator. Is that fair?

AD: I guess in the sense of the imagining part, what empathy is all about. On a deeper level the song is about all of us, about me. When the thing that sustains you and gives you life, and the thing that is most important, is painful. The more valuable a thing in life, the more painful. This has been my experience. I think that reflection is at the core of the whole record. The yin-yang experience of all that is.

HN: I want to make sure I’m following you then. Water seems like a metaphorical example, but what do you think of when you think of something that is both truly elemental but also causes the most pain?

AD: Again, the baseline of my last couple years of life has been having another kid. So there’s a very literal example of something joyous and important and very painful and hard, strenuous. My job has been that way for me lately. This last year has wrought some very painful experiences that make me look in a different way at the thing I love the most, playing music. It’s been an incredible ride that I wouldn’t trade for the world, but, boy, does it suck sometimes. And then I want to trade it for the world.

HN: What do you mean? Night-to-night it sucks? New challenges recently?

AD: Oh, just aspects of being a public personality. Some years more than others.

HN: I had just watched a great video of you taking some of the songs from the new album and playing them solo acoustic. You’re just a veteran of that instrument now, but known for experimenting with all sorts of tunings. Do different tunings help keep you stimulated on the acoustic guitar 20 years on?

AD: Definitely. Changing the tuning on the guitar is like giving you a different palette of paint, with different colors. And just like we were talking in the beginning about my relationship with my audience, I think I’ve matured into a really solid relationship with my instrument. I’m very lucky to have a) been handed an instrument when I was young … I mean, I asked for it, but they obliged [laughs] … and b) having this longstanding relationship with an instrument when I can express myself intuitively without trying. I don’t have to try and find inspiration. It’s part of my body. If I’m inspired the guitar will say so.

HN: That makes me think of another song on the record, “Woe Be Gone.” For someone who is so often talked about for her tangible, concrete political convictions, there are some important … I don’t know if “spiritual” is the right word … but there are turns on this record that are bigger than what’s on the news, or on the street. Is that some of what you were thinking about on this record?

Let’s see, “Woe Be Gone” … oh, I can hear that baby crying in the background. That’s OK his Daddy’s got him …

I entered politics through movements, through activism, through recognizing problems and shortcomings in society. As you get older, there’s such a tandem complication of knowledge. And also a simplification. All of them lead me back and back further to more elemental places. I look at all of the social diseases for which we are suffering and, to me, you can walk them back to patriarchy at the root of all the other modern imbalances.

And then you walk back from patriarchy … I read this book called The Alphabet vs. the Goddess. It really elevated my thinking. That the raise of patriarchy is about the rise of the left brain, which started his story, the alphabet, the written word and started everything you see around you. It’s a world of our left brain. Meanwhile, our right brain has a very different nature and awareness: artistic and emotional intelligences. The left brain is inherently masculine in nature, the right brain inherently feminine. But, of course, we both have both. We all have round heads [laughs]. But that song is about liberating the other hemisphere. And therefore finding a path away from this suffering.

HN: It seems like — I don’t know if “rabbit hole” is the right word — but it seems like you could write ten more records about that ongoing journey.

AD: And I plan to! Excellent idea.

HN: [Laughs]. Ani, before I let you go, I want to ask you about one of my favorite collaborations that you’ve done of late, your voicing the Persephone character on Hadestown. When I listen to that album, one of the things that astounds me is you’re giving these very classically theatrical performances and yet, you always feel, “Oh, that’s clearly Ani DiFranco singing or that’s clearly Justin Vernon.” Like these musical personas are informing this very character-based production. How do you reflect on your involvement with Hadestown?

AD: Well, I think incredible credit due to Anais …

HN: [Laughs] for writing the songs…

AD: Well yeah! For writing this incredible opera. And then manifesting it and creating this space where … she could have sung all the songs herself and had Hadestown the concept album. But instead she went this incredible extra distance that took years of time and much effort and humility and faith to incorporate all these other people let them transform this thing she had written, and sing it totally different from her. And it was amazing the way she negotiated it all.

I think I was like the fairy godmother of the project. Early on, I said I’m going to support this. I was incredibly impressed with her dedication to the process. It was very inspiring to be a part of.