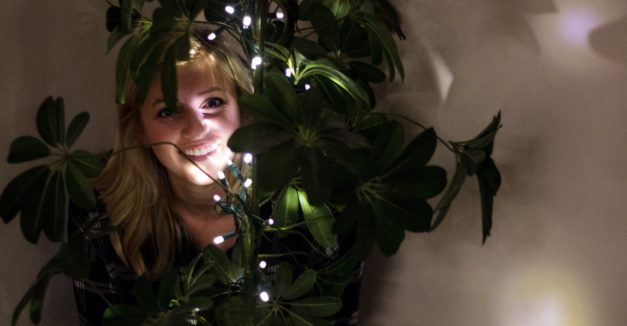 [The following was read on-air prior to Andrea von Kampen’s performance live in the KZUM studio on Monday, Nov 28 for Hear Nebraska FM. Listen to her set and watch a video of “Desdemona” below. The Lincoln singer/songwriter releases her new EP of the same name on Wednesday, Dec 14.]

When NPR Music’s Tiny Desk Concert Contest started right out of the gate this year, those of us who cover or are immersed in Nebraska music held a glimmer of hope that one of our own would sneak their way into the spotlight. So it goes with almost any nationally-known contest: the talent, quality and drive exist here, but who is paying attention?

On comes Andrea von Kampen, whose mournful yet comforting “Let Me Down Easy” popped up on the contest blog almost immediately. “The first thing you’ll notice about Andrea von Kampen’s [entry] is her voice,” wrote Ben Naddaff-Hafrey, stating for NPR’s national audience/readership what Nebraska already knew. Soulful and worn-in, the Lincoln songwriter’s dynamic voice is what allows her quiet folk songs to blossom with emotion, cutting straight to the core of the twisted yarn of love, loss and relationships.

In that way, perhaps equally as important as von Kampen’s sweetly moving voice is precisely how much she can deliver with it. Though sparse and reliant on that voice, her songs are sturdily constructed, like an age-old cabin or mid-century grain bin, the perfect vessel for what evokes Midwestern imagery, even implicitly, giving home to her grieving characters.

NPR is hardly the first to notice the complexity in von Kampen’s work. Funk musician and producer Lucas Kellison helped give life to her most recent EP, Another Day, and has reprised his role on her forthcoming album Desdemona, which Sower Records will release Dec 14. Add that to shared festival billings with the likes of Esmé Patteron, Gregory Alan Isakov and Simon Joyner, and no doubt the word is starting to spread.

Hear Nebraska FM is proud to have Andrea von Kampen on the show. Here she is with “Desdemona.”