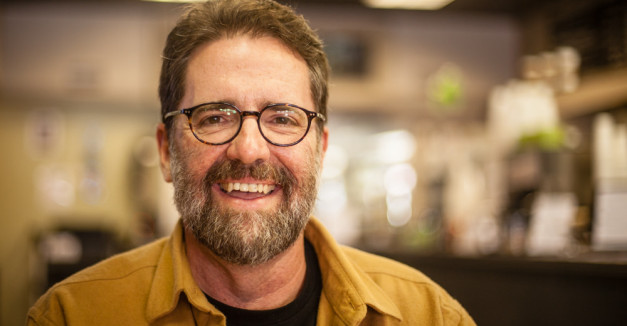 Dave Calkins was struggling to pay his bills in Denver as a 20-something opera singer.

He turned to a family trade. Calkin’s father was a psychiatrist. His sister, a social worker. His wife today is a psychologist. To supplement his income, he took a job at Denver’s now-closed Mt. Airy Psychiatric Hospital, working on a closed psych unit for adolescents.

“I wasn’t that much older than the clientele,” Calkins remembers over coffee at Scottsbluff’s Cappuccino and Company. “It was sometimes dangerous and always challenging, but really rewarding.”

Behind the gentle perch of his tortoise-shell glasses, Calkins is a soft-spoken collaborator in conversation, and listener by necessity. Even the interview briefly takes on the tone of a personalized brainstorming session.

Mt. Airy was an early sign and experience that led Calkins — albeit three decades later — to founding his nonprofit, the Ancova Empowerment Project. Through AEP, Calkins aims to turn 25 years of teaching and artistic experiences in guitar, piano, voice, composition and filmmaking into a constructive arts program for at-risk youth.

AEP is seeking prospective students facing behavioral, economic and/or legal challenges. That’s a broad slate of intersecting struggles, but Calkins sees Scottsbluff-Gering as an ideal canvas for the project on a geographic and social level, as well, touting the nickname he coined, “The New York of Nowhere.”

Calkins says he’s been mulling over the idea for Ancova Empowerment Project for several years, but the group only received its nonprofit status and solidified its board of directors this year. The organization is currently applying for a grant to launch this summer, beginning with a pilot program with three students, ages 12 to 23, with Calkins as their instructor.

This small start, Calkins says, is essential for collecting data and keeping AEP’s scope manageable, but most importantly, so that his instruction method can work effectively. Individualized, project-based learning demands a student-teacher relationship that takes time to form. For the immediate future, he’ll be the only teacher of three students, but expansion could happen quickly.

“Our biggest problem we discuss isn’t where are we gonna get students,” Calkins says. “We are going to be swamped with referrals. The demand for what we’re doing is phenomenal.”

“Everybody I’ve talked to has agreed there’s not enough services for young people,” he says.

The board for Ancova — a fictional brand name Calkins picked out for his own LLC years ago — includes psychologists Anne Talbot and Mark Hald, media consultant Tim Ostdiek and grant writer Sara Howsden Nicholson.

Calkins’ history is that of a lifelong artist, teacher and traveler. A native of the nearby town of Kimball, he’s lived in Omaha, Wyoming, Denver, New York City and now Scottsbluff. He’s a classically trained vocalist via the Manhattan School of Music who has performed at Carnegie Hall on three different occasions.

With AEP, Calkins hopes to takes his experiences teaching music lessons and coordinating group ensembles in Scottsbluff into the nonprofit sector.

Ancova board member, media consultant and singer-songwriter Tim Ostdiek can attest to Calkins’ methods. The Scottsbluff native, now living in Longmont, Colo., began taking guitar lessons from Calkins, but the pair soon turned their gaze to Ostdiek’s songwriting. They recorded a full-length album, Young Man’s Soul, together in 2010.

“[Dave’s] is a really empowering way of teaching,” Ostdiek says. “I think you can find your voice through it … to be artistic in every sense of what you’re doing.”

Ostdiek says he thinks Scottsbluff, in particular, is ripe for this sort of project.

“There’s a ton of artistic talent there,” he says, “but not a lot of outlets for creating something original. I think that could really benefit the community.”

Calkins and his board are currently working on a documentary that will detail his teaching method, and in full detail — the formula comprises 42 different points. The documentary will be available for grant purposes or curious observers.

But you can trace the existence of the project back to central philosophies on what it means to create art. Beyond personal experience, there’s a reason Calkins thinks art — and not, say, sports, community service, counseling or myriad other outlets — can empower underserved, struggling or stigmatized individuals.

“There’s a lot of the self that gets threatened by creating things,” he says. “It’s not just something that makes you feel good. That’s a superficial reading. It’s an exploration of what’s real. And your thoughts and feelings are real.”