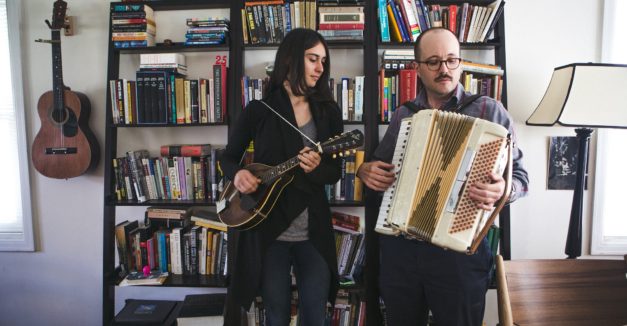 [This story previews Dolores Diaz & the Standby Club’s show Saturday, May 21 at The Waiting Room with Carl Miller & the Thrillers. Tickets are $10. RSVP here.]

I’m standing in Dan McCarthy’s cozy kitchen in Omaha’s Dundee neighborhood one sunny Wednesday afternoon, shooting the breeze with he and Corina Figueroa Escamilla while he prepares a cup of coffee. McCarthy is very meticulous, measuring 21 grams of fresh grounds into a receptacle positioned on a sleek black scale. For the pour-over method, he’ll drop 346 grams of hot water into it, crafting the perfect cup of black coffee.

Escamilla — the Dolores Diaz — stands in the doorway, interrogating her bandmate on the finer points of his method with a mix of playful mockery and actual interest. I move to debate the virtues of French Press when McCarthy starts to wonder about the reason we’ve gathered.

“Do you have questions for us?” he asks, and I respond. Nothing profound, just here to see what the Standby Club is all about.

“There is definitely nothing profound about this band,” McCarthy says.

In the purest sense of the word, the classic country-western cover band of which my conversation partners are apart doesn’t necessarily offer insight, save for the peak into its members’ own sphere. But the composition of their own individual successes is quite imposing. The Standby Club boasts an early-2000’s Omaha roll-call: Cursive’s Matt Maginn, ARC’s Ben Brodin, Bright Eyes’ Mike Mogis, The Good Life/Oquoa’s Roger Lewis, Pageturners’ co-owner Phil Schaffert, recent transplant Miwi La Lupa and the singer/songwriter Conor Oberst. 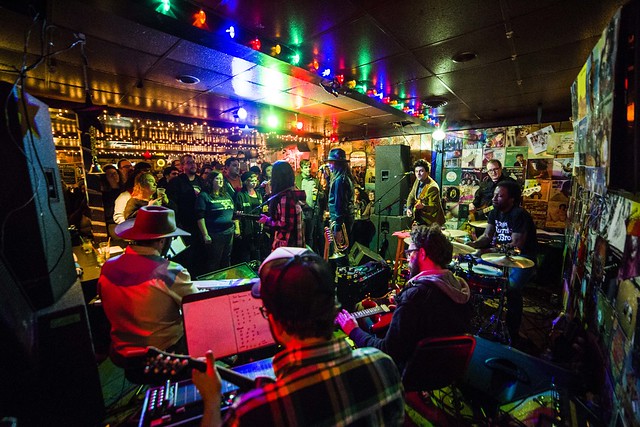 As Escamilla tells it, Oberst and La Lupa hatched the plan for the Standby Club. Everything about the band is random, she says, from her mysterious alter-ego (the result of their constant spitballing) to the name “Standby,” a phrase first uttered for onstage tuning breaks during a recent Oberst tour, evolving into a pervasive inside joke.

But the original idea was to form a house band during the winter, simply for the sake of a good time with a rotating cast of players at their Omaha home. La Lupa had recently moved in with Oberst and Escamilla, bringing with him a wealth of old-time country records.

McCarthy describes them as “weird old hits,” maybe the most recognizable among them Loretta Lynn’s “Don’t Come Home Drinkin’ (With Lovin’ On Your Mind).” The genre itself, though, yields a wealth of material that he says the band’s players can dig into.

“Among songwriters, there’s a lot of respect for the craft in country music songs,” McCarthy says. “They really are old school song-craft. Not making any controversial claims with that.”

Apparently there were enough earworms among their combined record collections to light a fire. Escamilla returned home from a recent trip to Mexico to a scheming Oberst and La Lupa.

“‘We’re gonna start a band!’” she says, mimicking their mischievous enthusiasm. “’It’s gonna be country! And you’re the singer.’”

Escamilla isn’t altogether without musical experience. A freelance sound engineer since 2010, she carries producing credits for Felice Brothers, First Aid Kit, Tilly & the Wall and an assist on McCarthy’s Plays the Piano record.

The band’s first show, January 3 at a brimming O’Leaver’s, was Escamilla’s first live onstage performance with any band. McCarthy and Escamilla both tell me internal expectations for the show were fairly tempered. But all the big names onstage must’ve attracted attention. At first, Escamilla was terrified.

“I truly never thought we were ever gonna play a show for the public,” Escamilla says. “Kind of like live karaoke, you know? But then our ‘manager’ Conor and our ‘director’ Miwi were like we should book a show!”

“Those two are so goal-oriented that they need to shoot for something,” McCarthy adds.

That drive seems more natural than calculated, judging by the air of unseriousness in the room. After my (pretty excellent) cup of coffee, the two pose for pictures with a mandolin and accordion — neither of which are Standby Club instruments — laughing as their impromptu duet decays into hilarious discordancy. 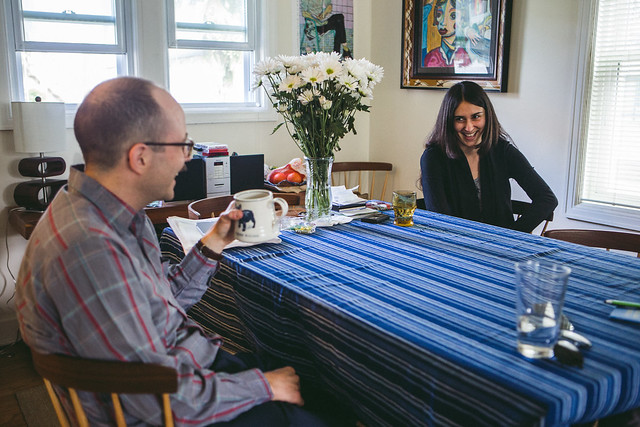 But for all the jokes and banter, the Standby Club prepares rather diligently. And why not, with so many professionals at any given practice session, most of which are recorded for absentee players (side-note: an original working title for the band was “The Five to 10 Club,” so named for the unpredictability of whom might show up on a given night).

McCarthy and Escamilla say they practiced for roughly six weeks before that first show, and have just recently fired the engines again after breaking for various touring and recording schedules. The band’s May 21 show (RSVP here) will feature a new batch of covers, among them a Ricky Skaggs tune McCarthy heard simply driving down the highway.

Even with the natural guidance in learning covers, preparation is not without some form of communication difficulty. They say the jargon barrier often results nine people yelling into their respective microphones in what feels like different languages.

“I play off of notes, and some people, like Miwi and Ben, think of it like chord charts and intervals,” McCarthy explains. “I think everyone understands it differently, which I think can be part of the challenge.”

But somehow it comes together, not unlike any other band. And McCarthy posits that maybe all cover bands reach that kind of consensus (he’s never played in one before). In the end, it’s all for fun; a bunch of musician friends doing what they might otherwise be doing anyway. The crowds happen to be bigger because of who is involved, but for all the goofy thematics and inside jokes, McCarthy is probably right.