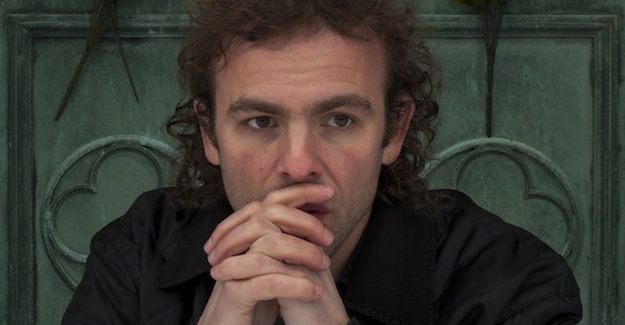 Near the outer limits of Austin, Texas, Damon McMahon is hailing his new horse.

It’s here, north of Party City and stretching alongside Jollyville Road, that McMahon and his crew of Amen Dunes-men are setting their battered van down to convalesce at the AutoNation Chevrolet. Talking of invisible musicality, Beggars Banquet basslines and the insincerity of bad food, McMahon deftly navigates our July 3 interview while catching a cab. It’s a small trick compared the hardships conquered by his cavernous cowboys populating Love, McMahon’s latest offering of 11 tracks, released May 13 on Sacred Bones Records.

But let’s not short shrift that van of theirs. Counting their hometown of New York City as the starting point of this trip, Amen Dunes will have toured nearly 20 cities by the time they roll into Omaha on Tuesday night to play Sweatshop Gallery. McMahon and company shoot to fill the Benson space with “alien elemental songs”: melodies like sky lanterns surrounded by sounds that make you wonder if you should take off your headphones and shut the window.

Hear Nebraska: You’ve often expressed an appreciation for sincerity in your music. Could you give me an example of a song in your catalogue that you consider sincere, and explain why?

Damon McMahon: They’re all sincere. They’re all equally sincere. “Sincere” is a sort of complicated word, but I guess it means like genuinely motivated. Some songs are sarcastic or cynical, so they’re not all starry-eyed. But they’re dedicated to something. I like to think of my music as genuine. I don’t think I can say a specific song.

HN: Continuing with that genuine quality, why do you deem it as important in the art you make?

DM: Because when I listen to music, I can’t get anything that’s valuable unless I believe the artist. If I hear something and I don’t believe it, it’s like bad food. My body does not want to ingest it. I think for music it’s the same thing. I think it’s important.

HN: If you could craft a sort of mission statement for your newest album, Love, what might it be?

DM: It was abstract while I was making the album, but after the fact, in interviews and stuff, as I think about the record, this idea of cowboy worship came up for me. Hold on, I’m gonna walk outside for the taxi. … The songs are ruminating or reflecting on figures, whether you yourself or I myself try to embody that: making music, touring and being in a band, in songwriting, or the people that I love and listen to. Or for the listener, this idea of someone who’s overcome hardship and made something beautiful out of it. That’s the idea. This record is odes to those characters.

HN: I understand you’ve given a friend of yours most of the control over the aesthetic of Amen Dunes, mostly through album covers. How would you describe that aesthetic, and has it ever reflected itself in the music?

DM: Yeah, that’s Tuomas Kopijaakko. He does all the art for the records, but I trust him in whatever he thinks is most suited for each record. I tend to work that way. I don’t work with anyone unless I trust them. But once I do, I feel comfortable in the creative process, letting people be themselves and do what they do.

Tuomas is one of those guys. In the beginning, it was more collaborative, but for the last two records, he 100 percent came up with the album cover. I would of course OK it and give him feedback, rap about it. But he was the one that was like, “This is what I’m thinking.”

HN: What does the cover of Love say to you?

DM: It’s not overthought. It’s just a beautiful image. We tried to come up with an answer to, “How do you represent love?” So we came up with these conceptually abstract ideas. We were trying to get to some core idea of it.

But then there was this picture on his wall, a picture of his girlfriend actually. They were going through hard times, so it was perfectly suited to the music. He didn’t want to do it. He thought it was boring, but I always thought it was beautiful. So we used that.

HN: You’ve mentioned that the original tracks recorded for Love include 15 players or so, but that you boiled them down to their essential elements. Could you elaborate on that process for a song like “Lonely Richard”?

DM: Totally. The guys from Godspeed You! Black Emperor played on most every song. To give an example, the bass player from that band, he played bass on that one: Beggars Banquet sort of bass lines. They were very cool, but at the end of the day, I don’t like what distracts from the core flow. I don’t like the superfluous bells and whistles, gimmicky, schticky stuff. I like stuff that’s musical.

Obviously, that was incredibly musical, but it wasn’t invisible enough. Then that song had tons of piano, vibraphone to follow the melody line. We just cut it down to a few piano hits here and there.

HN: As you’ve spent time on tour with the songs from Love, how have they grown with you?

It’s very important as a band that you’re playful and connected to one another. If you’re not playing with each other, the songs are not gonna play themselves. That’s just boring. So I think the key on tour is to make these repetitive behaviors, trying to make them new.

HN: I want to hone in on a particular section in “White Child,” near the beginning where one guitar falls out of line with the other. Especially as it leads the album, what kind of a feeling do you hope that sort of rhythm-defiant instrument gives a listener?

DM: I went back in the mixing process. I did all these overdubs on my own. It was a last-ditch effort, thinking too much. Most of that stuff I ditched. “I Can’t Dig It” was like a Beach Boys song with all these overdubs. On “White Child,” I overdubbed some acoustic noodly stuff. It really worked in the beginning. I like things that feel happenstance, and they are. I wanted the beginning of the record to feel gentle and calm, then explode into this song. Specifically, I was thinking of Aztec Camera. They had this record called High Land, Hard Rain. They do a lot of acoustic interplay.

HN: I’m always curious about the process of sequencing an album. Could you talk a bit about your decision to place a more propulsive track like “I Can’t Dig It” toward the end of the record?

DM: Yeah, I’m obsessed with sequencing. My whole life I’ve studied how other albums have good sequencing. I spent weeks driving around and listening to the mixes to see where the flow is best. That song was really hard because it was so different. “I Can’t Dig It” could be on a different record. Nothing worked, but putting it before the last song because it will override any other song on the record except for the last one.

It’s almost like a false ending. The album blows out, and then there’s this aftermath with the song “Love.” Sequencing is super important. On the first Amen Dunes record, I did the opposite. I started with the most aggressive song, then I progressively got calmer, which is what Big Star does on “Sister Lovers.” They start out loud and get quiet. On this record, it was more balanced, but I think there’s a flow between loud and quiet.

You gotta be careful of that shit.