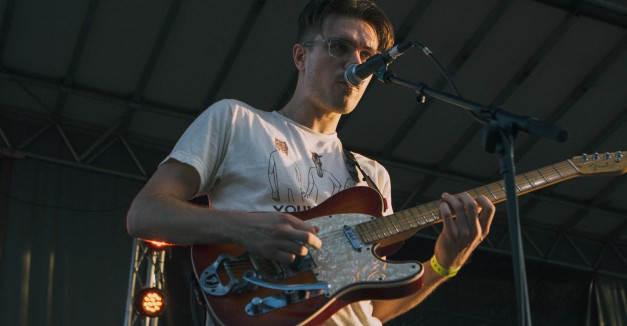 As a dude who is well into my thirties, I tend to get pretty jaded about punk rock and start to feel like I’ve heard/seen it all. My favorite all-time band is Dillinger Four, and for a while Iron Chic snuck in as a solid contender. Then one day I was sent a music video for a song called “Reservoir” by a feisty group of hard-body Canadian upstarts called PUP, and everything changed. PUP’s music is sincere, which is something lacking in most aspects of life, entertainment and communication (it also rocks, real hard). Then I saw them live, and suddenly I had a new favorite band. The homies covered “Sabotage,” tore the roof off the place and will literally put on one of the best live shows Omaha has ever seen this Sunday at The Waiting Room. I consider it an honor to be pals with them and be able to drink beers and force them to watch my stand up. Here’s a quick Q&A with Steve Sladowski who shreds the guitar in your new favorite band. Hell yeah.

Ian Douglas Terry: I’m going to start out with the #1 question all PUP fans want to know, and I’m sure you’ve heard it a thousand times…who is your favorite cast member of Trailer Park Boys?

Steve Sladowski: It’s Jonathan Torrens (J to the R-O-C), no contest. He had an after-school teenager talk show called Jonovision which ran on our public broadcaster, CBC, in the late ‘90s. His TV show introduced Sum 41 to the Canadian public. He’s a fucking national hero, Na’m’saeeen?!

IDT: Honestly dude, you rock…and as someone who rocks, please help settle this debate: Metallica or Morrissey?

IDT: How stoked are you to have a young and foxy new Prime Minister [Justin Trudeau] who is chill and cool?

SS: If he legalizes weed and does all the shit he’s saying, it will be tight af. Check this out: http://trudeaumetre.ca. We’re using a non-partisan internet website to keep track of this beautiful ma’fuck.

IDT: Off the top of your head, who was the most dynamically charismatic comedian you saw at The Fest this year? (You will be graded on this)

SS: It was you, then that dracula homie (author’s note: Brett Davis), and then Joe Sib. Also beer.

IDT: You dudes are obviously influenced by 311’s trademarked “White guys from a cold place that have tropical spirits” sound. What lesson(s) has 311’s music taught you?

SS: Amber really is the colour of everyone’s energy.

IDT: True or false: [PUP bassist] Nestor [Chumak] is a wizard/warlock. I have heard a lot of rumors.

SS: True. He is one of the few wizards of Ottawa, Ontario’s famous House of TARG (look it up).

IDT: You boys are playing in Omaha this Sunday (along with Modern Baseball, Tiny Moving Parts, and the homie Jeff Rosenstock) at The Waiting Room Lounge (Fugazi reference) and I know people are super stoked. Two part question: can I get a plus-one? And how fired up are you to perform in the city 311 is from?

SS: You may only have a plus-one if amber is truly the colour of your energy. Sidenote, who wins in a battle between Conor Oberst & 311? (author’s note: Conor Oberst is secretly in 311, therefore they could never battle).

But seriously, this will be our first time playing in Omaha — in Nebraska — and everyone has said it’s super rad. We’re pumped.

IDT: This is Nebraska word association. I’ll name famous people/things from Nebraska and you say the first thing that comes to mind. Bright Eyes.

IDT: What’s the worst thing [PUP drummer] Zach [Mykula] has ever done to you? I can tell he has a darkness inside of him. Don’t worry, he will never read this.

SS: Between Zach & I, there’s enough gas in our bodies to rival a factory farm.

IDT: How much garbage do you eat on tour? I went out for a month in the American South and gained 30 pounds from fried food. What’s your favorite garbage to eat?

SS: If McDonald’s stops doing that customer satisfaction survey, where you’re rewarded with 2-for-1 quarter pounders, it’s 97-percent our fault.

IDT: Did you play hockey as a kid? Were you required to? I did and got my front teeth knocked out by a puck. Does that make me more manly?

SS: No, I’m a shit skater. I played baseball. Someone once called me the most American Canadian they’d ever met. I feel like that dubious distinction belongs to Ted Cruz but what do I know? As far as your teeth go, congratulations. You and my dad now have something in common.

IDT: New album coming out. Everyone including me is super stoked. Big question: how many 311 covers are on it? Follow up: how many songs are about girls and drinking?

SS: No 311 covers, but it IS conceptually based around a certain colour of one’s energy. All songs involve subject matter about girls and drinking and feelings and tone and riffs. We’re stoked to get it out into the world.