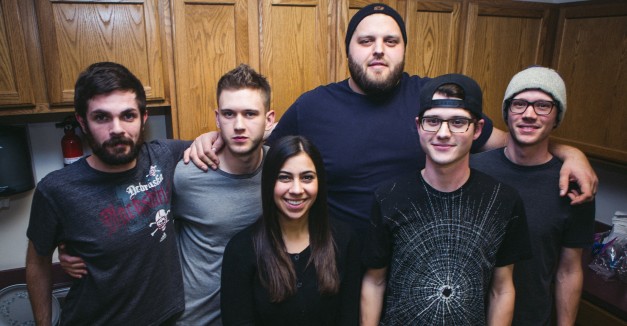 It was a chilly Saturday night at Lincoln Exposed earlier this year [2015], and Duffy’s Tavern was overrun. The band that you’re about to hear had drawn the 11 p.m. slot, and for those of you unfamiliar with the collegiate O Street destination, that’s prime fish-bowl time. So the first thing anyone probably noticed was how the confluence of concert-goer and Saturday night regular made it so damn difficult to get through the door, let alone from stage to bar and back.

But the second, and more strikingly noticeable to fans of basement-party royalty More Machine Now Than Man, was evolution from smooth funk to driving groove. Frontman Will Harman had slid over from guitar to bass to make way for Myles Jasnowski, who at this rate will play for every band in Lincoln by 2017. Synth player Mike Masin, trombone player Ian Fleming and percussionist/vocalist Ariel Sinha swirled in and out of each other’s paths fluidly. And, yes, Deeeep C was still Deeeep C — otherwise known as drummer Cal Harman — but A Ferocious Jungle Cat had punched it into overdrive, in front of a capacity audience no less.

If the Duffy’s show was the golden trombone blast, announcing the erstwhile, fallen Skywalker’s replacement by frisky feline, everything since has been the note sustaining. With a solidified lineup, the Lincoln six-piece has played every kind of event imaginable, from noontime Hear Lincoln concert to street festival to art gallery opening and everything in between. It’s a testament to A Ferocious Jungle Cat’s wide-appeal that at every single one, people got down.

Before we get to tonight’s performance, let’s not forget the punctuation mark on a fruitful 2015. A full-length album isn’t the only important measure of success, but A Ferocious Jungle Cat released its self-titled debut just last month. It opens wide the band’s ever-expanding toolbox, incorporating elements of it’s smooth funk past and trebly, high-energy present. Explicit or not, it’s telling that the band chose this moment for the release. Every movement is tighter, more precise, every tone deeper and dripping with feeling.

Yeah, the recipe is different, but there is more than one path to the promised land. This one happens to groove and shake harder than ever. And yes, Deeep C is still Deeep C.

Catch them next at The Bourbon’s New Years Eve Masquerade Ball with Josh Hoyer & Soul Colossal and Mesonjixx. To get you out of your seat in the meantime, here’s A Ferocious Jungle Cat with “Last Time.”