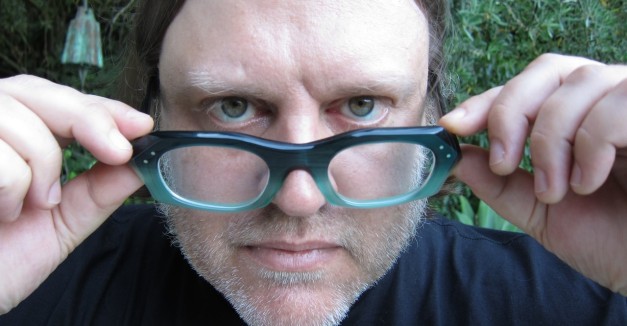 Six months ago, my 30-something boss informed a 20-something me that Matthew Sweet was living in Omaha.

He was leaning forward, anticipating my excited response. It was the kind of enthusiasm that stales instantly when it’s not reciprocated.

I felt bad: “Should I know who that is?”

Short answer, yes. Sweet is a Lincoln-born, influential pop/rock musician, who released five well-regarded albums in the ’90s and worked on several more projects throughout the 2000s.

“What did you listen to when you drove to high school football games?” my boss asked, chuckling a little after just a moment of exasperation.

Mostly The Killers’ Sam’s Town. What’s more, I’m sure the look he gave me is a dead ringer for the one I’ll fix on 2019 high school graduates, when I breathlessly describe Brandon Flowers’ beautiful bone structure and overwhelming bellows.

Fast forward to now, and Matthew Sweet plays two shows in Nebraska this week. Tonight, he’s at O’Leaver’s in Omaha, which has been sold out for the some time. On Thursday, Sweet is in Lincoln at Vega, and there are still tickets available to that show.

In the interest of helping myself and know-nothings like me, I’ve compiled a brief primer on Matthew Sweet and his accomplishments.

Now, I don’t want to conflate weird trivia with Sweet’s impressive life achievements. So in two different lists, here are ten facts to catch up the laymen on Matthew Sweet.

1. If, like me, you don’t know any Matthew Sweet music, it makes sense to start with “Girlfriend.”

It’s the title track from Sweet’s breakout record, released in 1991 on Zoo Entertainment. “Girlfriend” was a top 10 hit on multiple Billboard rock charts.

The song is a slice of convincing power pop, incorporating the rhythm guitar kick of a Huey Lewis hit, but completely overpowered by a needling lead guitar. Listen to the sharpness and sheer number of guitar notes, you can hear the oncoming grunge boom scowling at and ultimately devouring this sound. All the same, it’s interesting to think how wide open the popular music landscape was pre-grunge and just before hip-hop became totally commonplace on pop radio.

2. Again, Sweet is back in Nebraska.

Sweet had been living in Los Angeles for two decades before moving to Omaha with his wife late last year. Earlier this week, Sweet told the Lincoln Journal Star that he’s outfitted his new Omaha home with a studio. It’s the place where he’ll begin work on a forthcoming Kickstarter-funded LP.

3. He once sang beautiful, note-for-note harmony with Michael Stipe.

After leaving Lincoln in the mid-1980s, Sweet moved to Athens, Georgia at the right time, just a couple years before R.E.M’s Murmur. In 1983, Sweet and Stipe recorded “Tainted Obligation,” this odd-sounding country duet that showcases Stipe brilliantly flexing the whine-turned-baritone that would be on the radio for the next 20 years.

You can see the anime-esque visual effects in the music video for “Girlfriend,” but that only scratches the surface of the relationship between Sweet and Japan. In 2003, he released the album Kimi Ga Suki exclusively (at least, initially) in Japan.

In a 2004 interview with Lazy-i, Sweet noted that he doesn’t want anyone to misperceive that he’s a secret sensation across the Pacific, but the closeness of his relationship to his Japanese fans seems noteworthy.

“I wanted ‘Kimi’ to be a Japanese record with a Japanese title. I wanted it to be for them. They appreciate things on a different level, and take their art very seriously — that’s special if you’re an artist.”

5. There is new Kickstarter-funded Matthew Sweet music on the way.

Last week, Sweet’s Kickstarter for a new album reached its fundraising goal of $32,000. And now it’s climbed past the $50,000 mark. There’s a 3D art component to the Kickstarter, as well, but here’s what Sweet says on the page about plans for a new record:

“I’m going to make a new album, hopefully with support from you! I’m going to write all new songs and make demos for the album, focusing on a strong clear delivery, energetic and heartfelt from rock to melancholy and back again. I’m planning to record in Omaha with my longtime band members and special guests coming out to play. My plan is to start writing soon after this campaign ends, be recording in the fall, and complete the project before Spring 2015.”

1. Kindly hold the phone; Sweet did the title track for 1996 film Flipper.

Now, this movie is berserk to begin with.

Someone at a movie studio saw Free Willy, and contracted eyeball dollar signs thinking about remaking the ’60s dolphin movie. Flipper stars Elijah Wood as an angsty teen who goes to live with Paul Hogan on an island where Isaac Hayes is the sheriff. So just chew on that for a minute. Chew on it like the man-eating hammerhead shark in Flipper tries to chew on Flipper’s flipper.

It’s a pretty maudlin movie about sea mammals taking bottle-nosed revenge on sea fish, while both Paul Hogan and Elijah Wood learn a little bit about themselves.

Anyway, the song is like a power-pop version of “Jolly Old Saint Nicholas,” but about a dolphin. Really great melody though.

2. He’ll do a guest voice on The Simpsons this year.

The show kicks off its 26th season this fall. Sweet will do a voice. At present, that’s all we know.

4. YouTube-search Sweet, and find a highlight reel of ’90s network TV execs with their tails between their legs.

Wanna know why Dennis Miller didn’t pan out on television post-SNL? The first 45 seconds of this clip spin a convincing case. But then watch Sweet lay it down with gusto.

5. I don’t feel as bad for writing this, because people of my generation make a habit of embarrassing themselves around Matthew Sweet all the time.

“Girlfriend” appeared on Guitar Hero II in 2006. And apparently, as of 2011, people were asking Matthew Sweet to sign Guitar Hero controllers.

That year, Sweet told Spin: “I definitely met a few people who have learned about [the song] that way. I autographed a few of those guitars, those plastic controllers. In fact, I autographed one just the other day for some fella.”

Thanks for being a good sport, Matthew, and sorry we thought it was OK to bring Guitar Hero controllers to a show. We will go watch Flipper now and try to learn more about living without hang-ups.