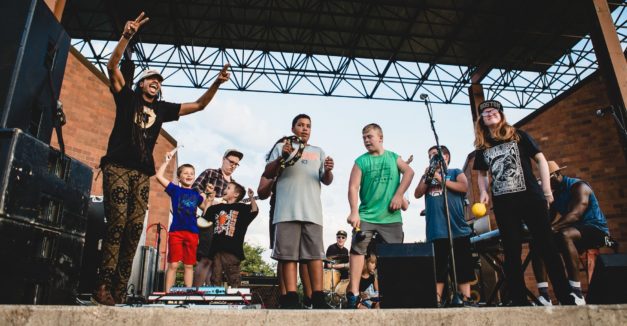 As the year’s end approaches, it’s time to take stock of all the Hear Nebraska team has accomplished and, immediately, my mind turns to the Good Living Tour. The statewide concert series and storytelling project embodies HN’s mission and spirit, connecting thousands of music enthusiasts with hundreds of in-state artists and musicians and bringing new fans into the fold.

Here are just a few numbers:

Not only has it helped answer the question “What is there to do in Nebraska?” by reaching a statewide and national audience, but in its third year, the Good Living Tour has successfully become an intrinsic part of our summers. Our personal lives, vacations, obligations are all scheduled around its weekend events — getaways themselves which remind us that original art and culture are important components of a thriving society.

Undoubtedly the best part of the whole thing is the communities who continue to show up and support local music. All eight towns — Auburn, Hebron, Imperial, Red Cloud, McCook, Norfolk, Lyons, Hastings — went further than simply welcoming the tour. Each has injected their own ideas into the mix, from food truck rallies and craft chair auctions to costumed fun runs and parties devoted to the alignment of celestial bodies. You have all made it feel bigger and more important than we could have imagined. Simply put, y’all have everything worth it.

So here it is, the final, full concert series recap video, with highlights from each stop. We hope you had as much fun as we did; relive it all below.

If you attended the Good Living Tour this year, help us make 2018 even better by taking our brief survey: http://bit.ly/2i46qNJ