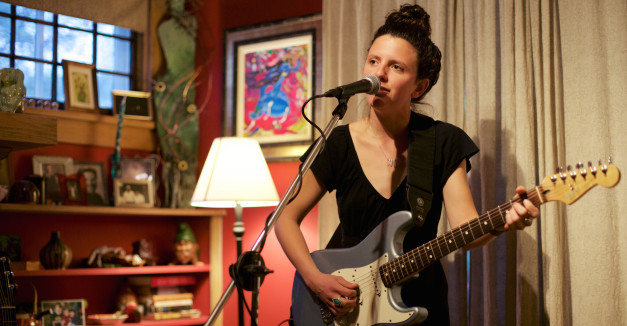 Inside a red-walled living room, mismatched benches and wood chairs were staggered in close proximity, spilling into the next room. A large, floral-print rug covered most of the wood floor, its garden peeking out from the chairs.

Two light-colored acoustic guitars rested against a beige curtain. The darkening sky of late April peeked through the window behind the curtain, giving the orange of the floor lamps the illusion of an warmer glow.

This is the scene inside a tan, two-story house on a quiet, tree-shaded hill on Fontenelle Boulevard in Omaha’s Dundee neighborhood. The sun room is decorated in small, twinkling lights that shine bright from the inside. Around once a month, the home becomes a haven for folk music lovers.

FolkHouse, which had its 150th show in April, is a venue for the older crowd within Omaha’s house show scene. Jerome Brich, FolkHouse’s homeowner and founder, appreciates the intimacy of the shows he curates and the gang of music-loving regulars he befriended in the process.

“It’s just a little community,” Brich says. “Under the radar, but we’re here.”

Around 7 p.m., a half hour before the April 25 show’s start time, guests began to saunter in through the unlocked front door. Some stopped to greet others they’ve met at FolkHouse shows before, while others carried food and drinks to the kitchen. One guest brushed past shoulders, various wines clanking in the box he carried.

Dave McGraw and Mandy Ferrarini stood in a corner of the living room, looking around for familiar faces.

“Hi, I remember you! How are you?” Ferrarini beamed and hugged a couple, one of them holding a foil-wrapped pan, before exiting the living room to prepare for their show.

McGraw and Ferrarini, who play as San Juan Island, Wash.,-based Dave McGraw & Mandy Fer, are eating dinner with Brich and his wife, Mary Montag, before their show. Now, they snack on Wheat Thins and gnaw on a vegetable dish. 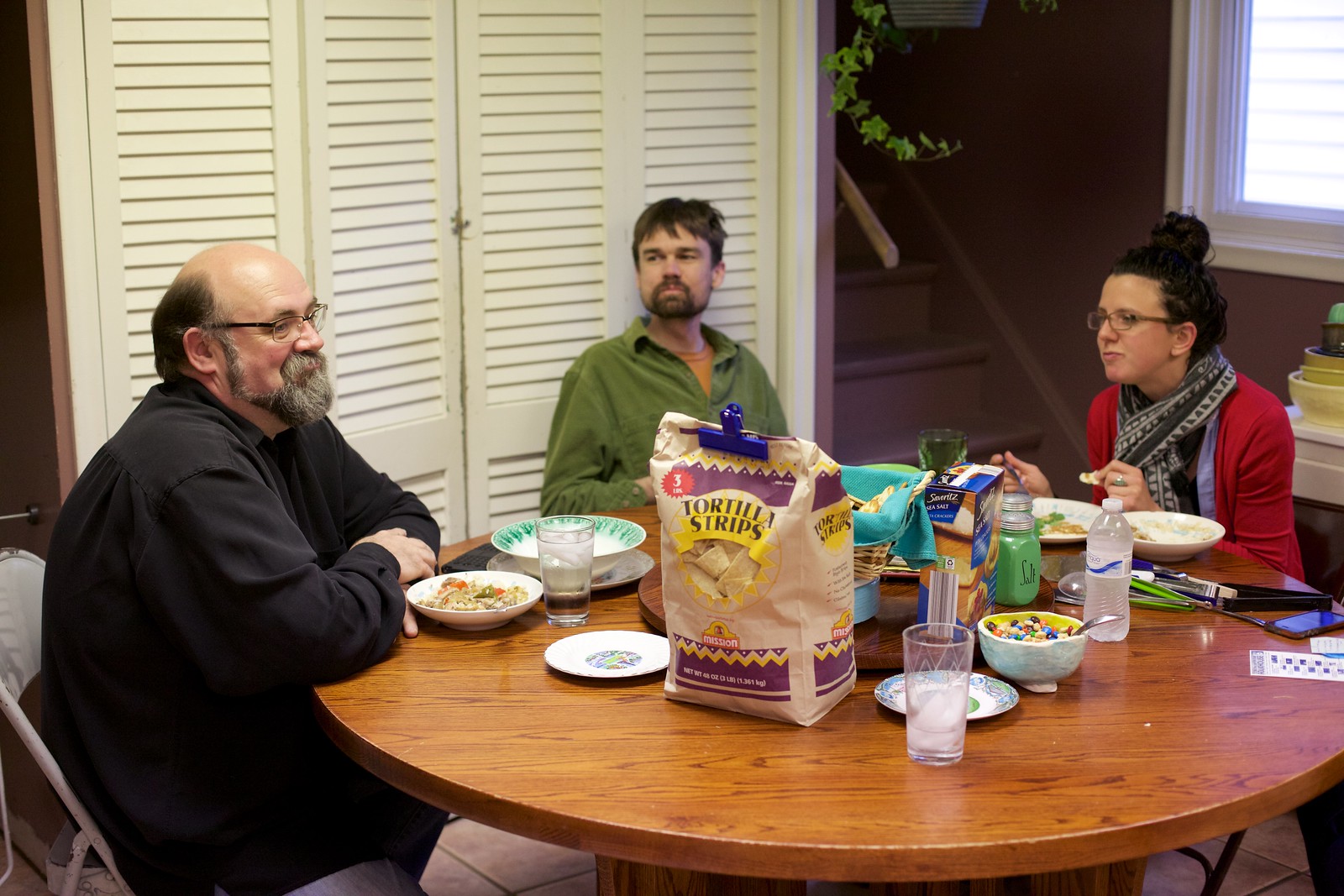 “I think we found out about them via Internet, maybe through another person’s tour schedule,” Ferrarini says. “I remember we were in Denver at Dave’s parents’ house and we thought this place looked cool.”

This night marks McGraw and Ferrarini’s third visit to FolkHouse, and they agree on the venue’s intimate atmosphere. More so, they say, they come back to visit Brich and Montag, with whom they keep in touch outside of booking FolkHouse shows.

Montag says McGraw and Ferrari are not the only musicians they befriended in the process, saying they have special memories with almost every artist that stays with them.

“I distinctly remember sitting around after your show drinking wine,” Brich says to Ferrarini. “Mary was on a roll and you said, ‘Mary, you’re the funniest woman I’ve ever met.’”

Brich says in 2000, the traditional folk scene in Omaha was “pretty dismal.” He says he was a regular concert-goer in bar venues, but wanted to find a way to bring more of his favorite musicians, like Jeff Black, to town.

Brich says he attended a Lincoln Association for Traditional Arts show and met Rebecca Carr, who was hosting house shows in Lincoln at the time. Around the same time, he moved into his current house on Fontenelle Boulevard and decided it would be a great place to host shows.

“I played in bands for years and got sick of bars,” Brich says, who still plays in Brich and Killion. “It’s mainly for the intimacy of a house concert. It’s just easiest to keep it small.”

Guests reserved seats by setting down purses and jackets, retreating to the kitchen to grab appetizers. Some turned around in their chairs, asking each other the news about kids and grandkids.

Brich admits the usual crowd is on the older side, and guesses the median age is around 50 years old. Depending on the act, he says younger people will find out about the show, and sometimes come with their parents.

“Our biggest obstacle is getting people to try it once because it’s not a traditional venue,” Brich says. “Everyone here is friendly. I’ve been to a couple house shows where, yeah, it’s a little uncomfortable but generally, people are very friendly and are there for the same reason.”

Jazz music played from speaker near the staircase. Brich put out more chairs as he slightly underestimated the attendance.

He says he once considered moving FolkHouse to a public venue. He tested out the idea on a Jeff Black Trio show in 2008, renting Central Presbyterian’s gathering center. He says although it was a good concert and it took away some of the stress of hosting a house show, he clearly saw the advantages of running shows out of his home.

“You really lose the intimacy of a house concert,” Brich says. “I used to enjoy going out to bars and venues to listen to live music, it’s not that I don’t enjoy it, but it’s so much better when the main focus is on the music.”

McGraw and Ferrarini descended the steps, their faces brightening as they recognized more guests. The room quieted as Ferrarini waved and smiled. “Great to see you! Thanks for coming!” McGraw shook hands with a man in the front row.

As McGraw and Ferrarini took their places at the front of the living room, slipping guitar straps over their bodies and adjusting their tuning, Brich addressed the crowd, thanking his guests for attending the concert and asking them to silence their cell phones.

In addition to giving touring acts a place to play, Brich and Montag give all the proceeds for the show — they ask for a $20 donation per guest  — to the musicians, feed them dinner and give them a place to sleep for the night.

Ferrarini plucked the first few notes of a somber folk song. The speaker near the staircase perfectly sounded out every note of the delicate guitar and hummed as McGraw and Ferrarini harmonized.

“It’s good to be back in our favorite living room in Nebraska,” McGraw says. 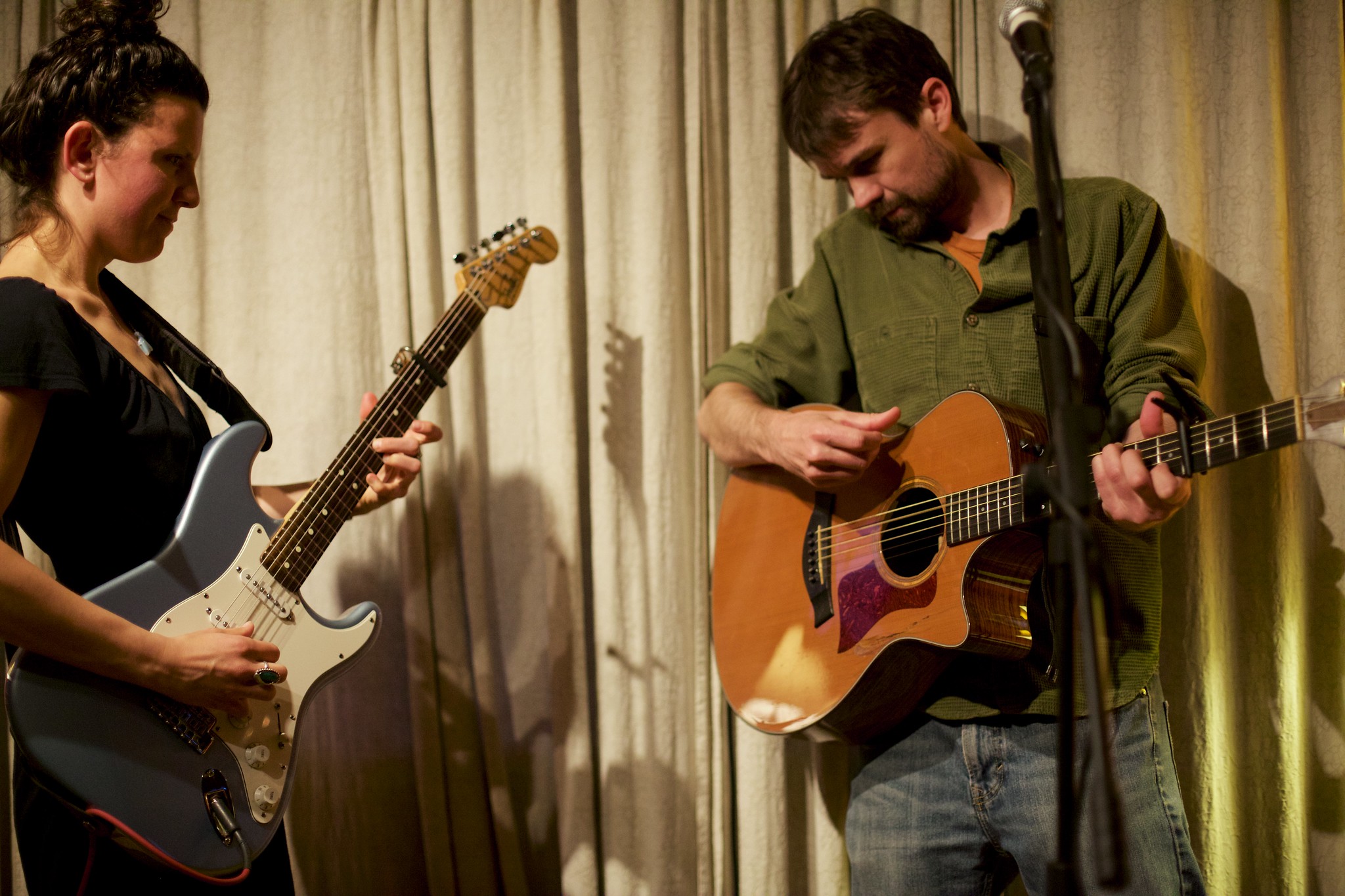 Although the first few years required Brich to seek out artists to play FolkHouse, he says he now receives at least 150 emails a year from musicians requesting to play, mostly from word-of mouth by previous FolkHouse musicians.

Some acts, like Dave McGraw and Mandy Fer, have asked to come back several times. Brich says it’s often hard to find a good balance between bringing in old and new acts because they sometimes have to make a decision between two touring bands: one they’re interested in trying out, and the other they’ve hosted and enjoyed before.

Dave McGraw and Mandy Fer’s lyrics are folk at its purest form, with images of nature weaved in love songs. It’s no surprise, as McGraw spent years as a wildlife biologist before touring the country with Ferrarini.

Assuming it was part of their normal stage routine, McGraw asked the audience if he already told them the story of his first date with Ferrarini back in 2010. A few in the front shouted, “Tell it again!”

Ferrarini dared McGraw to write a song that contained these five things: symphony, purple sage, Devil Dog Road, tornado and Sazurac, McGraw told the audience. By the time he listed “tornado” and “Sazurac,” some in the audience blurted it out from memory.

McGraw and Ferrarini grinned at each other, and slowly crept into the opening bars of “So Comes the Day,” the song they wrote from that challenge. A police siren from down the street wailed above McGraw’s low, tumbling serenade. Their soft foot taps were audible on the wood floor.

Ferrarini switched out her acoustic guitar for a light-blue electric guitar, adding a blues component to a few heavier songs, including “Comin’ Down.” McGraw and Ferrarini’s vocals were equally calming and nurturing, but Ferrarini’s electric guitar solos shred and showed off her technical skill.

Brich and Montag aren’t worried about spending a little money to keep FolkHouse alive. Brich says they spend around $50 per show for food and drinks, though many guests bring their own treats.

“If we go out to dinner, it’s going to cost that much,” Brich says. “This way, we have a house full of people and some great music. It’s a win-win for everybody.”

Around 40 bodies swarmed the kitchen where brownies and finger sandwiches overpopulated Brich and Montag’s dinner table. Some complimented each other for the dishes they brought. Two enormous Orsi’s pizzas — the pizzas Montag’s brother brought — covered an entire card table.

“Hey, I think you were at the last show,” a man says as he shakes hands with another. They promptly introduce themselves and name off every FolkHouse show they went to, laughing and reminiscing the ones they happened to both attend.

Brich says they expect 25 to 30 attendees per show with mostly regulars in the audience, some who have been to almost every show for most of the 15 years. He says some have even attended the shows for nearly the full 15 years, though he really looks forward to new guests.

“It’s just a great community of folks who come to these shows,” Brich says. “Definitely seems like really warm energy and people are ready to have a good time.”

Brich says those hearing about FolkHouse for the first time are often skeptical about his eager willingness to allow strangers into his home, though he insists it’s never an issue. In FolkHouse’s existence, Brich says he’s never run into an issue with items missing or guests getting out of hand.

“It’s very much a listening environment,” Brich says. “A lot of people come for the social aspect, but it’s really about the music.”

When many have finished their plates, Brich claps his hands, bringing the guests chatter to a low hum. “Hey, everybody, we’re going to start up again here pretty quick,” he says, waving them from the packed kitchen into the living room.

The audience returned to their seats and waited as McGraw and Ferrarini finished their conversations with guests. The musicians tipped back the last few drops of a homemade lemonade from a red Solo cup and followed the guests to the living room.