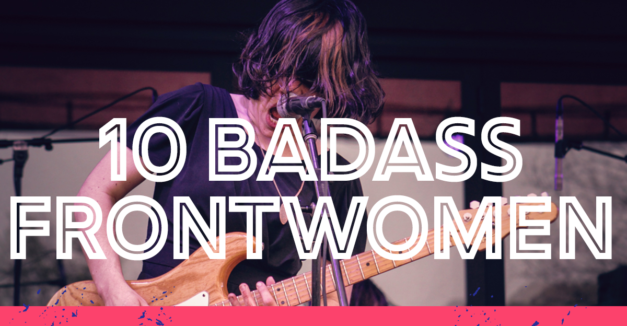 One of the most appealing aspects of any music festival, Lincoln Calling included, is the possibility of seeing a diverse set of acts during any one night or weekend. Look at this year’s three-night downtown Lincoln event through its women musicians, and the sentiment rings true.

Out of 41 acts featuring women musicians at the 13th-annual Lincoln Calling, we list 10 of the most energetic, honest, technically proficient and overall most badass of the bunch. From Marissa Paternoster to Sara Bertuldo to Alex White, we feature the 10 can’t-miss leading women of the festival below.

The New Brunswick, New Jersey-based punk rock trio has built a strong following through 11 years of dogged independent touring and six full-length albums. Paternoster’s unique, bellowing vocals and screaming leads are at the forefront, born of their basement origins. It is no fluke the frontwoman was named one of the top 100 guitarists of all time by SPIN Magazine in 2012. Soon after, the band “broke out” (read: into mainstream attention), its fifth-album Ugly receiving across the board accolades that same year. 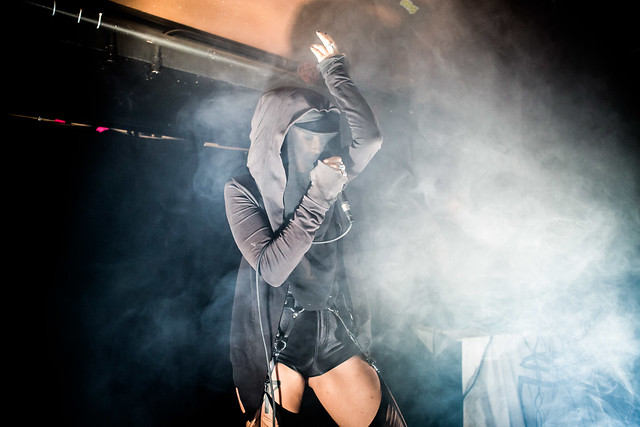 Comprising Heather Gabel and Seth Sher, the duo Hide trades in shadowy grooves equally capable of inducing entrancement and terror. Gabel made her bones doing design work for artists like Alkaline Trio, Joan Jett and Rancid, and is now pouring herself into some of the most captivating industrial music around.

Before considering the challenges Gaelynn Lea faces daily, which necessitate her unconventional yet beautiful playing style, consider the music itself. Lea’s weepy violin, measured yet aching vocals and an Irish folk tradition combine to tug at the heartstrings. It’s why, out of a pile of 6,100 artists, NPR’s Bob Boilen and crew chose Lea as its overwhelming favorite of the second Tiny Desk Concert contest. As she explained to NPR Music’s Audie Cornish, she didn’t want her congenital “brittle bones disease” to be the Tiny Desk audience’s first impression, “Not because I’m ashamed of it, in any way, but just because I wanted it to be about the music.” Long a dedicated performer and classically trained player, she thrives despite her condition, “reinventing the ordinary,” as Boilen puts it, on the way to our hearts. 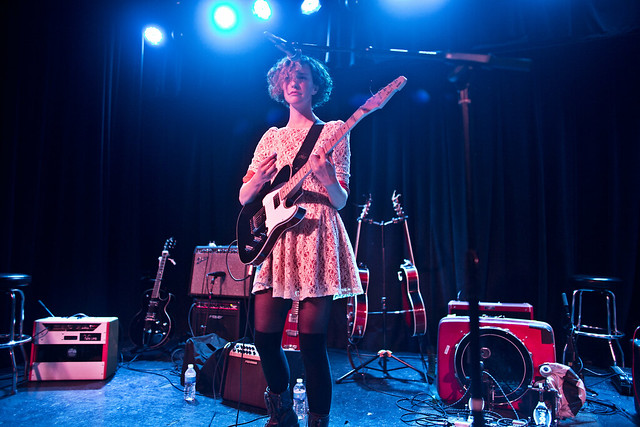 As founder of beloved Colorado folk outfit Paper Bird, in collaboration with Shakey Graves and now for her own burgeoning solo, Esmé Patterson’s rich, sweet vocals and charming folk presence have been ever felt over the last decade. Patterson parted ways with Paper Bird in 2014 on her way to debut album Woman to Woman. In expanding her work for this year’s We Were Wild, she writes with a vulnerability and honesty that flows through soul, classic country and folk the way a Cat Power or Neko Case record might. In tracks like “No River,” the freeing admission of human weakness is most pronounced.

The Austin, Texas, based A Giant Dog is a force of nature, kicking out relentlessly powerful live shows since 2008. Its frontwoman Sabrina Ellis, bursting with limitless energy, pilots the raging party of a band, which just released its Merge Records debut Pile earlier this year. “Sex & Drugs” epitomizes its undeterred hard-rock approach, with a barrage of gang vocals screaming “I’m too old to die young/I can’t even remember being young.” The warning signs would drive you to dive out of the way if you weren’t having so much goddamn fun. 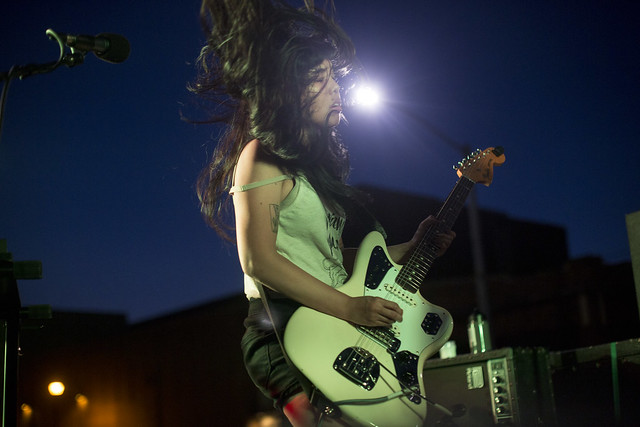 The Omaha indie rock mainstays have enjoyed a breakout of sorts over its last 15 months, signing to North Carolina indie/punk label Tiny Engines (Cayetana, The Hotelier, Restorations) and releasing a rangy, genre-bending EP in End of Days. The success is due in no small part to vocalist/guitarist Sara Bertuldo, who comprises one-half the band’s songwriting duo with counterpart Matthew Carroll. Bertuldo’s songs build and burst, with tracks like “Little Apple Rot” barely containing its hessian guitar riffs. And in the live setting, her stage presence is nearly unmatched; Omaha residents can find her flinging herself from the highest stage speaker with regularity and abandon. 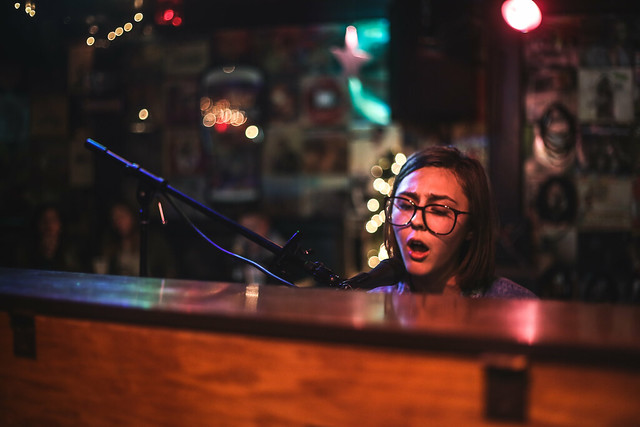 While you might find the pianist/songwriter’s name on many an Omaha shortlist these days, it would be for a different kind of mastery than of the city’s nationally-touted indie rock sound. McClellan’s solo work sparkles with classical brilliance as her lyrical work explores one’s doubt in personally relationships and insecurity in the vastness of the universe. Recorded at Omaha’s renowned ARC Studios, her debut Fire Flames dropped last October on Ryan Fox’s (The Good Life) Portland tape label Majestic Litter. 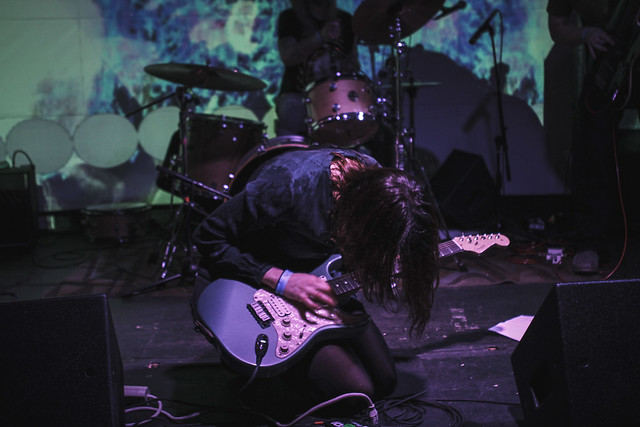 Roaring out of Austin since 2009, Megafauna prides itself on “rocking your face and sometimes, just sometimes, makes you tear up inside and proclaim YES. YES.” The band describes itself as “the thinking woman’s hard rock” fronted by the electric and undeterrable Dani Neff. 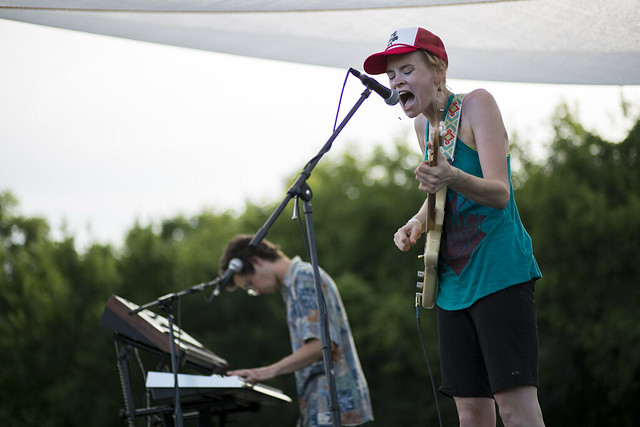 If Eros & the Eschaton’s 2013 debut introduced the duo of Kate Perdoni and Adam Hawkins into the world of intimate dream pop, its sophomore follow-up Weight Of Matter (out now on Bar/None Records) has propelled them into the guitar rock stratosphere. The Nebraska ex-pats’ wavy shoegaze is still ever-present, but with the addition of a full band, it has been ratcheted-up to Crazy Horse chaos. Known to Nebraskans as Katey Sleeveless, Perdoni’s frantic, high-pitched` vocals on “Rxx” traverse rock ‘n’ roll past to present amidst the band’s fuzzy, heavy new sound. 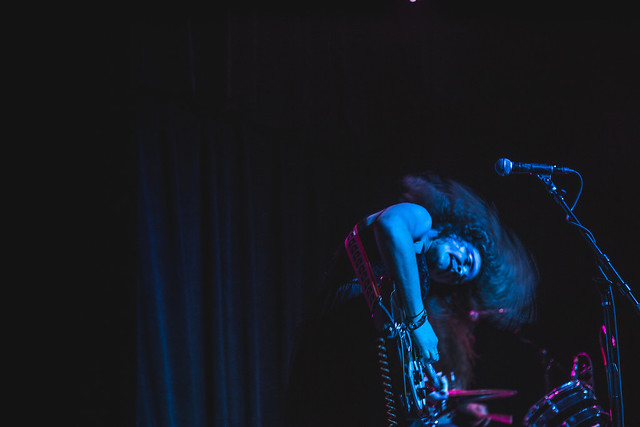 Those who write about such things have noted a certain population of regional bands as honorary Lincolnites. For Chicago-based White Mystery, Lincoln Calling has played a huge role in connecting the duo to a kind of second home. Locals will note Alex and Francis White’s place among names like Bogusman, Dirty Talker and Halfwit. And as a former HNer wrote in 2014, Alex’s physical ferocity and aggressive playing style echoes that of Halfwit’s bassist Saber Blazek. The siblings White trade in a powerful mix of ‘60s rock and heavy metal, doing their best to rip it all limb from limb. Like clockwork, fans can find a new album from the garage rockers each year on April 20. This year’s Outta Control carries the redheaded rockers’ explosive mantle.