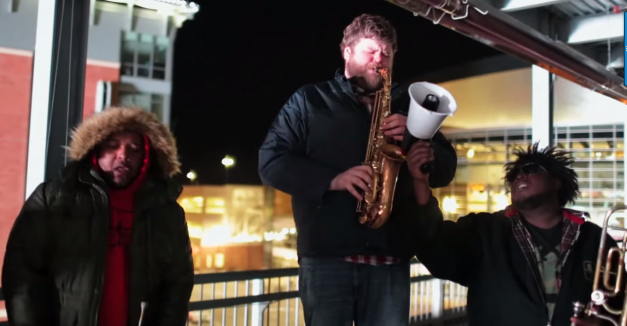 Father John Misty’s April 8 Omaha show sold out yesterday, and then it didn’t.

Originally at The Waiting Room, it’s been moved to Sokol Auditorium, which we assume is for Sokol’s larger capacity, i.e. more tickets. We’re not sure who made the decision — Father John’s people or One Percent Productions (though we have asked) — but if you missed out the first time, get your tickets now.

Since the release of the singer-songwriter’s I Love You, Honeybear two weeks ago, Father John Misty (a.k.a Josh Tillman) has landed in-depth features from Pitchfork, Grantland, NPR and more. It’s hardly a surprise that shows are selling out.

Our multimedia intern JP Davis and contributor Nickolai Hammar shot a video with the 12-piece band before its show at Vega. Players are bundled against the cold weather, but otherwise the band appears fiery and energetic.

Check out the Vega TV video below.

There’s never been a better time to be a lifelong fan of The Ugly Organ.

Tim Kasher has been doing quite a bit of press lately with November’s reissue of The Ugly Organ and Cursive’s massive spring tour currently underway. Read our deep dive on the record here.

Last week, he spoke with Seattle Weekly, Seattle’s alternative newspaper. Given the timing of the tour, just five months after Saddle Creek issued a deluxe, remastered version of The Ugly Organ, most interviews are concerned with Kasher in retrospect.

For his part, Kasher seems to have become a master of moving-forward in those 12 years since the original release. He remembers anxiety about the masterpiece, and even not loving it sometimes, but appears to have since dismissed those feelings, or anything that might mean dwelling on the past.

He also talk about Omaha and the Saddle Creek boom in the early ‘00s, when The Faint, Bright Eyes, Cursive and more were all on the rise.

“My hunch is that bands in larger cities may have been more aware of what was going on around them,” he says in the interview. “We felt fairly oblivious, which I think is great. It was also a time before excessive social media inundating all facets of our lives, so perhaps we were still able to live under the proverbial rock, at least a little bit.”