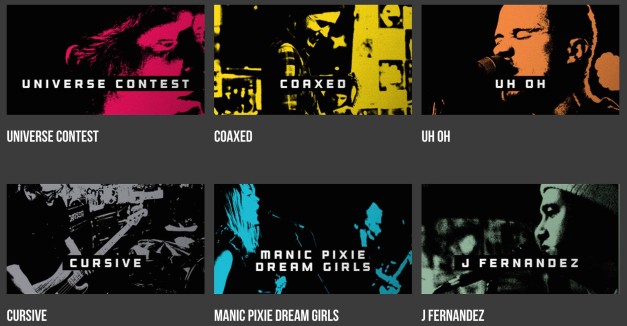 Since its founding in 1990 by NOFX frontman Fat Mike, Fat Wreck Chords has been one of the most influential independent punk labels in the country. The tour celebration of its 25th anniversary begins next month, and it’s coming to Omaha.

Black Heart Booking announced this morning that the Fat Wreck Tour will stop at Slowdown on Aug. 19. The tour roster includes Lagwagon, Strung Out, Swingin’ Utters, The Flatliners, toyGuitar and Bad Cop/Bad Cop.

With a Fat Wreck Chords all-star list of bands, Black Heart Booking’s Lucas Wright says it may be one of the biggest out-of-state punk shows of the year, even with NOFX absent from the Omaha stop. The likes of Lagwagon, Strung Out and Swingin’ Utters are label veterans, active in spurts since the label began and releasing piles of albums, EPs and singles. The Flatliners released Cavalcade in 2010, their most successful to date after forming in 2002. ToyGuitar and Bad Cop/Bad Cop are relatively new to the label, but have been gaining steam in the last couple of years.

Live at O’Leaver’s is out with a brand new batch of recordings this morning, adding 30 more and doubling the size of their public collection.

Additions to the live audio archive’s website include Universe Contest, Manic Pixie Dream Girls, Big Harp, See Through Dresses, Kill County, Bonehart Flannigan and a couple dozen others. A few touring acts, such as The Kickback, She Keeps Bees and Planes Mistaken For Stars, were also added.

Upon launching, the site promised to continue releasing from its archive of more than 100 acts. So it’s reasonable to expect more from chief engineer and project leader Ian Aeillo.

Omahamagazine.com recently published an article penned by Matt Whipkey, in which he praises Simon Joyner and gives a playlist of his nine favorite songs from the folk songwriter.

In the article, Whipkey calls Joyner “an American songwriting treasure,” and chooses a mix of songs that span the entirety of Joyner’s career. Whipkey identifies songs like “The Only Living Boy In Omaha” and “You Got Under My Skin” as staples in the catalogue.

Read the article here, set your Spotify playlist and refamiliarize yourself.

Tonight, Blitzen Trapper comes to The Waiting Room for a show with We Are The Willows. RSVP here. Blitzen Trapper is on the verge of releasing its eighth studio album, reportedly titled All Across This Land. The Portland-based experimental folk quintet broke out in 2007 with critically acclaimed LP Wild Mountain Nation.

Other shows tonight include Carl Miller and the Thrillers at Pageturners Lounge (RSVP here) and songwriter Lisa Weyerhauser at the Chocolate Bar in Grand Island (details here). For a full listing of shows, check out our statewide calendar at hearnebraska.org/events. As always, feel free to email us at news@hearnebraska.org with show additions, news tips and story ideas.