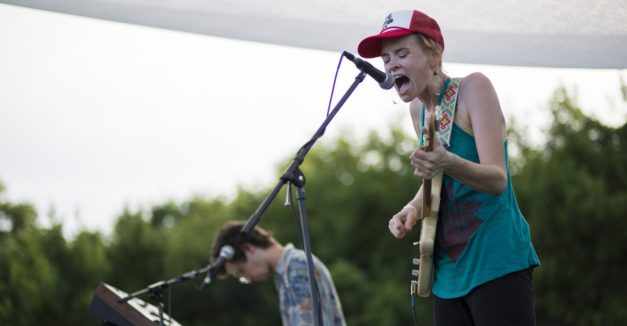 Eros & the Eschaton — founded by Nebraska ex-pats Adam Hawkins and Katey Perdoni — has announced its sophomore LP with a brand new single.

The now-Colorado Springs-based band premiered hard-rocking “Rxx” yesterday via Consequence of Sound. It came coupled with the announcement Weight of Matter, out Aug. 19 on Bar/None Records.

Perdoni — who recorded and performed out of Nebraska as Katey Sleeveless — tells Consequence of Sound the song glimpses “novel flashes in rock and roll history,” imagining the Festival Express train and the formation of Buffalo Springfield. The track also peaks at the now-five-piece’s fuzzy, guitar-heavy new sound.

Read the premiere here, and listen to “Rxx” below”

The Way Out premieres new video, embarks on tour

The pieces of shattered relationship often scatter throughout one’s mind, the original breaking point nearly unidentifiable amongst the rubble.

The Way Out explores the idea in its brand new “Nerves” video. Filmed in the band’s hometown, it rifles through romantic remains like the contents of a tossed filing cabinet, eventually culminating in the climactic fireside shouting match.

The song appears on the Ashland pop punk quartet’s debut EP Good Grief, which The Way Out is squeezing as much as out of as possible. It heads out on a regional tour which starts tomorrow in Boulder, Colorado.

See the video and tour dates below:

The blues-rock sextet wowed enough patrons at last weekend’s OEAA Summer Showcase to nab the spot, placing first among 70-plus bands based on fan vote. As a further prize, Dilemma will be featured in Omaha alt-weekly The Reader in the run-up to the festival.

Tonight, Porchfest LNK hosts its crowdfunding kickoff party at The Bourbon, 1415 O St, in order to support its free and family-oriented event mission, and in order to help with operational costs (insurance, administrative fees, potential street closures, etc). A quartet of Lincoln acts will perform, including folk singer/songwriter Orion Walsh, hip-hop artists Sleep Sinatra and Pariah Princess and comedy/rock act Sgt. Seaman and His Tragic Hand. The 8 p.m. concert is $5 at the door, RSVP here.