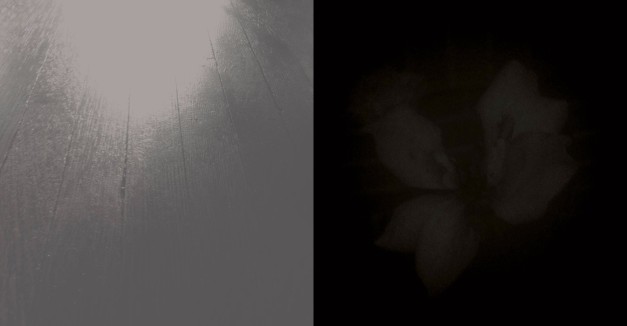 Transfigured is a slow building eight-track LP with rich texture and a booming finish. Second-Floor is a two-track drone LP, which he recorded with cassette player. Both songs eclipse the 30-minute mark. Hansen told us in June that parts of the record took more than a year to complete. Both albums are now available via Bandcamp and Neologist Productions.

This week, Hansen curated a vast playlist of electronic, ambient and neo-classical music for blog Headphone Commute. It includes an original, unreleased track called “The Bells,” as well as an excerpt from “Lowfolk 1985.” Stream his playlist here.

The quartet is currently at work on a new EP, McFly, which will contain more typical Super Ghost offerings in the vein of recent single “Railroad Spikes.” Yet, as the tape’s title suggests, this may not be the first of the group’s exploratory outputs.

“I feel like right now as a band we’re walking up to the plate, pointing up at the sky, and calling where we’re going to hit the ball to,” says frontman Jake Newbold.

Listen to Sultan of Swat below — out now on We’re Trying Records — and grab one of the limited 40 copies at any upcoming show. They play Milk Run December 11 with blét, Justin Ready and the Echo Prairie and Kansas City, Kan., band Pamona — RSVP here.

Catching up from Sunday, HN contributor Ben Semisch went to The Waiting Room Sunday to catch a stacked punk billing featuring Modern Baseball, PUP, Jeff Rosenstock and Tiny Moving Parts. Semisch captured each performance in .gifs, which you can see below:

A new trailer has been released for Nebraska filmmaker Aaron Gum’s new horror movie Endor. It features previews of more than a handful of bloody deaths, set to a performance by Orenda Fink.

Endor is the second feature film from Gum, who will co-direct with screenwriter Faustus McGreeves. In both of his directorial endeavors, Gum has been very inclusive of Nebraska musical and theatrical talent.

See the trailer below:

Tonight, Between the Buried and Me comes to The Bourbon with Boston’s Native Construct, Los Angeles band Intronaut and Norway’s Enslaved. The North Carolina progressive metal act is on tour in support of Coma Ecliptic, its seventh studio LP. Its run included a six-year, five-album stint on emo/hardcore label Victory Records. Between the Buried and Me is known for its technically challenging riffs and incorporation and blending of myriad metal styles. RSVP to the 6 p.m. show here.