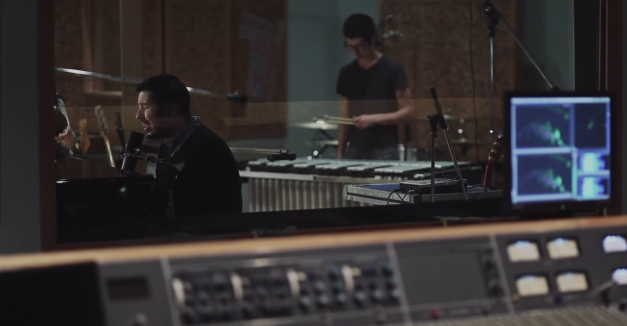 In 2012, one year after Des Moines-Omaha-based The Envy Corps recorded It Culls You at ARC with AJ Mogis, the band returned to the studio.

This time, they were going to play the same 12 tracks that appear on the band’s third LP but as a sort of album-that-could’ve-been for The Envy Corps Live at ARC. Tracks come in a different order, imagined often with more orchestral arrangements than they appear on It Culls You. The one-hour live music video was released online yesterday.

The video was directed by Danny Drysdale and edited by Michael Rossow and Ben Whitmer. Stay tuned for some insight from the band on the video.

Live at ARC has an intimate in-the-room feel that most live videos, filmed at full concerts, lack. It hints at The Envy Corps’ ambitions, too, with the alternate version of It Culls You and the desire to release it as a high-quality, masterfully-made video. Watch the band cast itself up with the likes of Radiohead, with whom The Envy Corps certainly shares some sonic qualities on tracks like “Dipsomania.”

Reptar’s Lurid Glow gets its official release on March 31 by Joyful Noise but, as of yesterday, you don’t have to wait that long to hear the band’s second full-length album.

Pop Matters premiered the album with an early stream. First listen immediately reinforces the Athens-based band’s eclectic taste with “No One Will Ever Love You” sounding something like 2011 Yeasayer and “Sea of Fertility” like a helium-swallowing version of Vampire Weekend.

Pop Matters says, “Reptar have a way of taking dozens of seemingly disparate sounds, throwing them together, and coming up with some wildly inventive and fun pop tunes.”

If you’re looking to see Reptar in Nebraska, the band is at Slowdown on April 14 with Icky Blossoms. RSVP here for what should be a huge show.

One day before his Sunday gig at Sokol Auditorium opening for Tweedy, Juan Wauters will play a free in-store performance at Saddle Creek Shop (RSVP).

The Uruguay-born singer-songwriter formed The Beets when he moved to the United States ten years ago. The jangly punk band gained a steady cult following. Now on his own, Wauters released his debut solo record N.A.P. North American Poetry in February last year.

Wauters is currently touring his forthcoming Who, Me? (May 12, Captured Tracks). It lands somewhere between the outsider folk of Daniel Johnston and a keen ear for pop convention.

This afternoon, hear Davina and The Vagabonds on KZUM’s X-Rated: Women in Music, hosted by Shannon Claire. Claire is teaming up with Every Kind of Blue’s Laura Fortney for the live in-studio performance.

The Minneapolis-based blues-rock band played Zoo Bar last night and plays The 21st Saloon tonight in Omaha (RSVP). Davina and The Vagabonds released Sunshine in May and anticipates a forthcoming live album.

Tonight, the Lincoln pizza parlor Yia Yia’s hosts Our Era 4, the next installment in a series of shows currently making its way around Lincoln bars and house venues. The series appears to be led by Mesonjixx’s Mary Lawson.