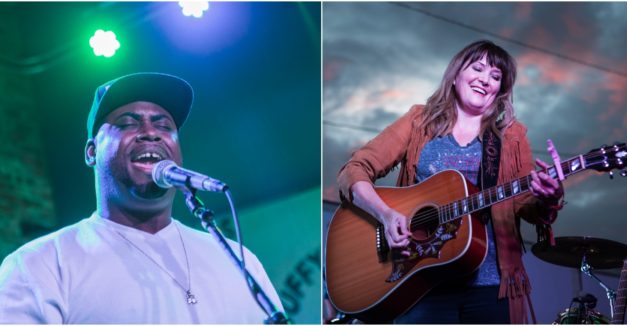 Part of what makes our annual Take Cover benefit concert unique is the smart or inventive takes on classic Nebraska music — and when they are done with an air of reverence. It might be complimentary enough to execute a cover at all, but it is another thing to perform a song by an artist that had a formative effect on its re-interpreter.

That is the spirit behind Omaha R&B artist Dominique Morgan’s choice for the sixth-annual Take Cover Omaha, presented by Medical Solutions. When he takes the stage Saturday, Jan 28, he’ll perform “Fire” by country duo Belles & Whistles.

Here’s Morgan on how longtime guitarist/vocalist Jamie Jones inspired him as an aspiring musician:

“I first met Jamie when I was in the 10th grade for a Leadership Omaha event. I had no idea musicians could live off of their craft and not be Michael Jackson or something. I always loved Mulberry Lane as well. So when I found her and Kelli’s band I was instantly in love. I adore country music. The lyrics, the drama. That speaks to my heart. So the opportunity to sing one of their songs is a huge honor for me.”

We’re excited to see how this one turns out. See and hear for yourself as Morgan and 11 more Omaha acts reinterpret some of their favorite Nebraska songs at The Waiting Room for Take Cover Omaha. And catch Take Cover Lincoln presented by Ameritas on Friday, Jan 27, as 11 Lincoln acts will do the same.

Thanks to our sponsors, both Take Cover concerts are free to attend. RSVP here and here, respectively.

After turning heads at its first show this summer, Omaha punk rock band Crease has dropped its first batch of recordings.

The quartet, led by vocalist Camille Stout, shared its debut demo via Bandcamp just before the weekend. It captures the vigor of Crease’s live debut this past August at the Nebraska Hardcore Showcase.

The effort is fast-paced and crushing, blowing through five songs in just less than 10 minutes. Stout (who also plays bass in Omaha punk band No Thanks) is passionate and gritty, shouting down warnings to cat-callers in “Neighborhood Watch” and blasting male entitlement in “Male Gaze.”

Hear the demo below:

New Music Mondays is back at The Waiting Room. Tonight, the revived weekly series features Stately Wayne Manor, Dress Us In Guns and The Toppings. The all-ages show starts at 8 p.m. and admission is free. RSVP here.

Also tonight, Hear Nebraska FM hits the KZUM airwaves from 8-10 p.m. with its weekly two-hour all-Nebraska-music radio show. Stream live via kzum.org or tune in to 89.3 FM in Lincoln.

Check out shows for the coming week via our statewide calendar here. If you noticed we’ve missed something or have a news tip or story idea to send our way, email news@hearnebraska.org.