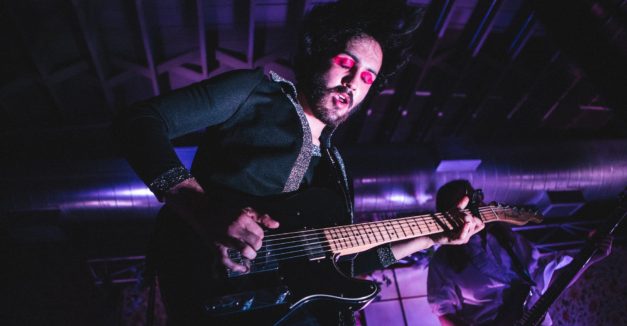 Omaha R&B singer Dominique Morgan is at his best when drawing on personal experience, allowing his soothing, passionate vibrato to lead the way.

Morgan does so dynamically in the pair of tracks released over the weekend. “Life” is an aggressive tone change for the vocalist as he digs into the struggles he faced while incarcerated in 2005. Produced by Afonso Jones, the track features Morgan’s brother, emcee Rowdy, with a verse at the end. Morgan says Rowdy’s verse fit perfectly, which gave him confidence in the new direction.

“Not only was I ready to address the topics from the song but I think folks can handle a new sound from me,” Morgan says.

The second track, “Neither One Of Us,” is a vintage Morgan ballad and throwback to Gladys Knight and the Pips. Both will appear on forthcoming album Therapy Notes in March 2017.

Hear both tracks below:

The Ambulanters couldn’t play an encore at its own record release. The crowd, mostly exhausted from three energetic bands coaxing the dance moves out of them, chanted for a few more songs. Vocalist/guitarist Sam Costello apologized, The Ambulanters had exhausted their repertoire.

The Ambulanters headlined its EP release show at Chez Hay to play and promote Leave The House, along with fellow Lincoln bands This Machine Kills Vibes, Better Friend and I Forgot To Love My Father

This Machine Kills Vibes played first, a little after 9 p.m. Vocalist/guitarist Spencer Krull broke his guitar a few songs into the set and had to ask if anybody had a guitar he could borrow. In a matter of minutes he had a new guitar cradled in his arms, told the crowd the replacement felt firm and launched the rest of the band, bassist Robert Specht, drummer Marshal Fisher and guitarist/vocalist Alex Steele into the next song. TMKV wrapped up with a tribute to Prince bathed in purple lighting, finishing “Purple Rain” with a cacophony swelling the room with sound. 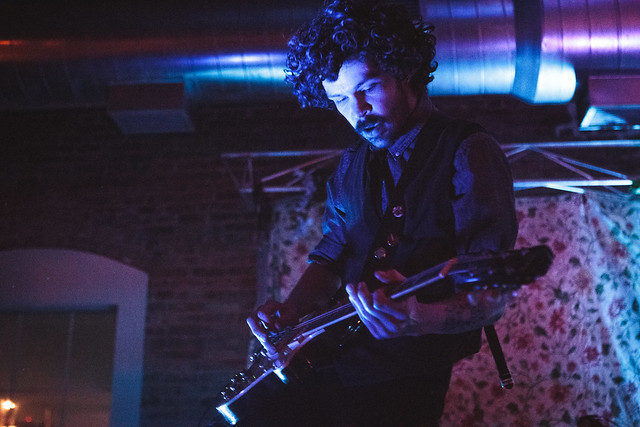 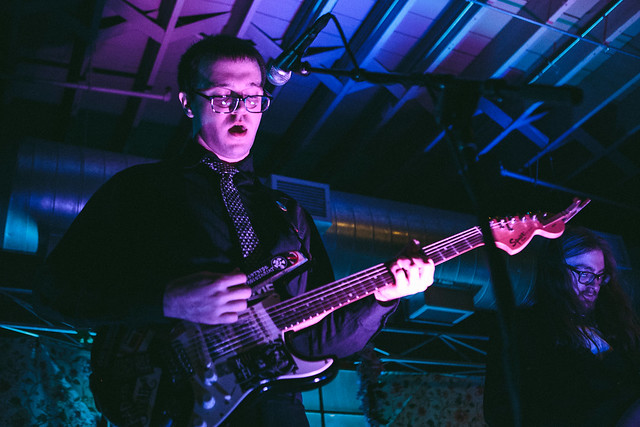 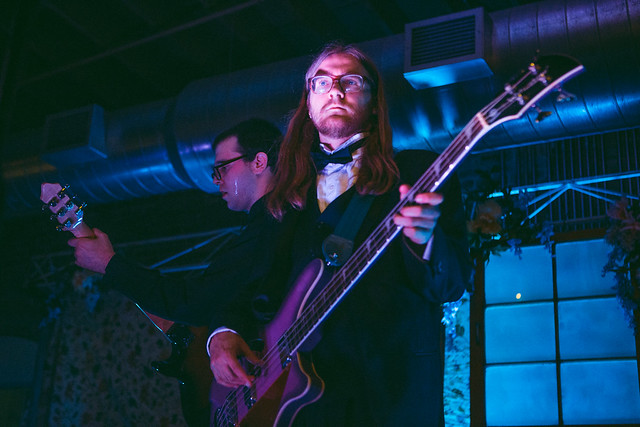 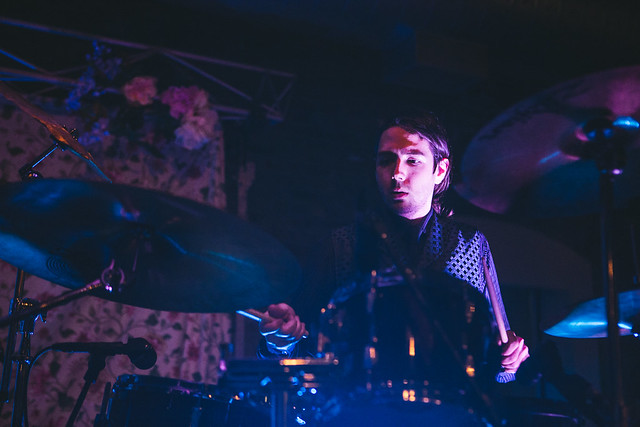 JP Davis, I Forgot To Love My Father’s vocalist/guitarist, sang his sound check instead of reciting the typical “test.” A swath of baby’s breath surrounded violinist Marina Kushner’s fading teal-tipped curls, only to get thrown off as she transformed her violin into an almost R&B-esque instrument. Kushner dominated the beat, running her bow back and forth in a throbbing pattern to create a new rhythm to follow slightly echoing that of drummer Mike Rhian’s.

A mix of hands, “M” marked and not, found space to lay flat on the stage, their owners knowing that a moment of stillness doesn’t last long after I Forgot To Love My Father starts to play.

Hands rocketed into the air in fists. Gold lighting illuminated the seven-member band from below, soaring upward and spraying over the crowd to match David Tysdal’s floating and dominant trumpet blasts.

Davis launched into a freestyle rap, digging beneath drummer Rhian’s persistent tapping, rhyming friend’s names with other band members’. Every molecule of that golden light flashed off Davis’ back as he plummeted into the crowd. The back of the pink guitar covered his face, surrounded by the people whose names he laced into the freestyle. 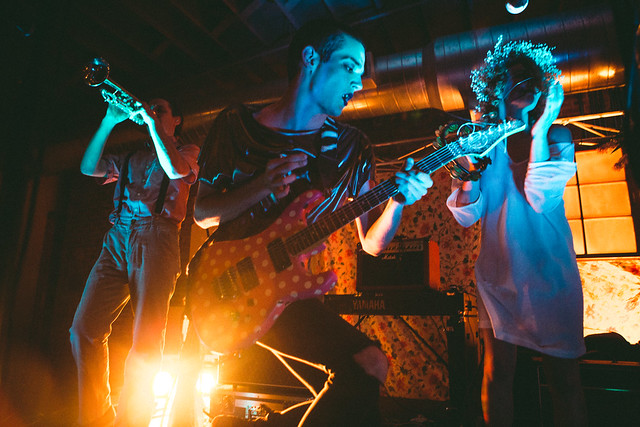 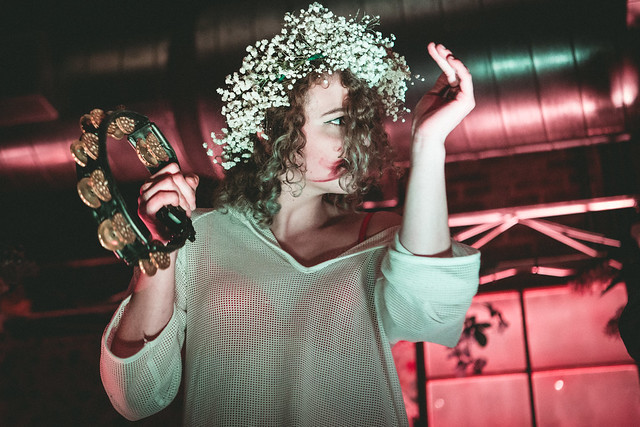 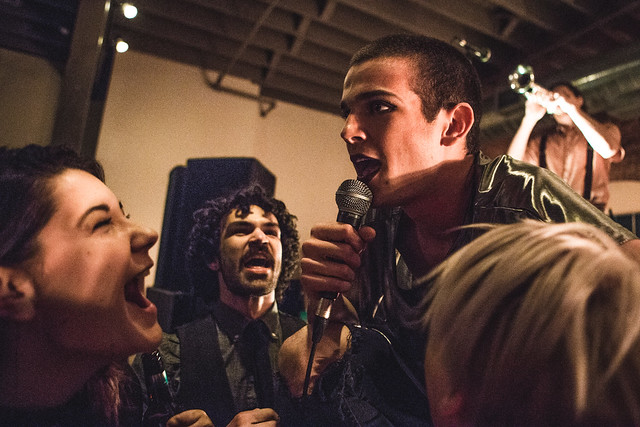 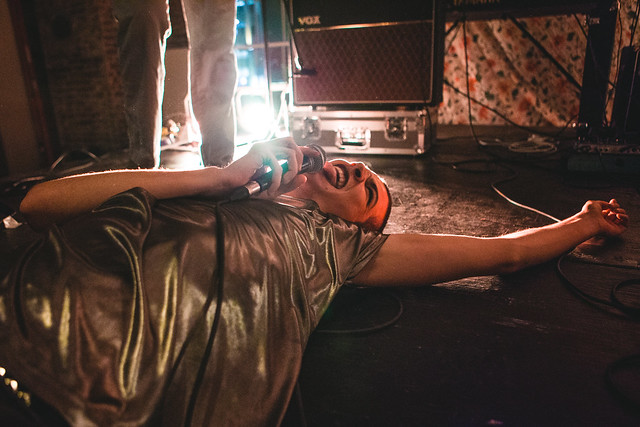 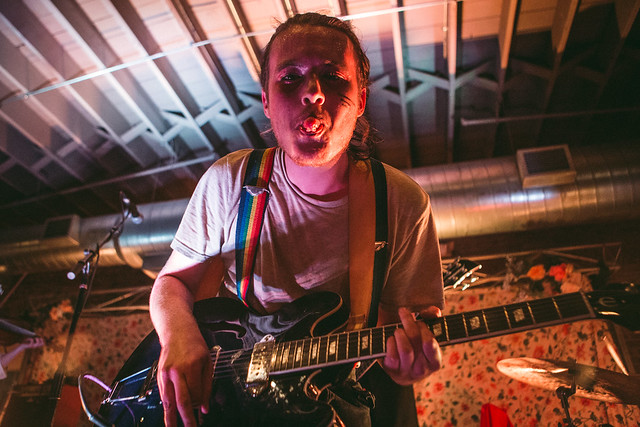 Riding an adrenaline high, the now somewhat packed Chez Hay took a moment to collect themselves for the high energy and emotionally tugging Better Friend. Two songs deep, vocalist Meghan Munyon apologized to the crowd if they saw her ass as if the crowd hadn’t been too busy head banging and screaming Munyon’s lyrics back to her.

She fell to her knees and when she stood, anytime she stood, she looked up at the crowd with an empty stare, lost in the depths of her lyricism.

There’s something about being looked at by eyes that are so lost in their own reality, they’re not looking at anything in particular but more so looking introvertly. It sucked the crowd in on an intimate level. 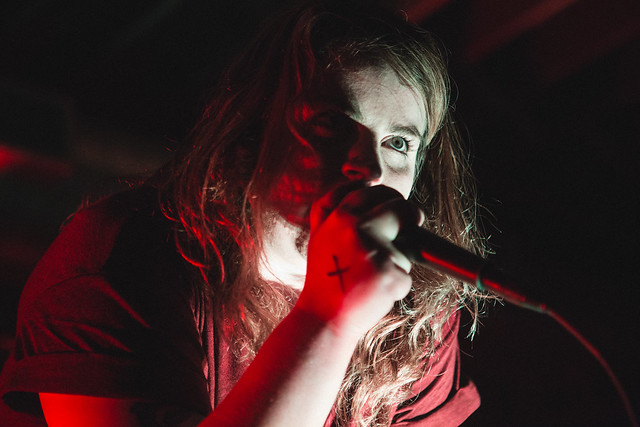 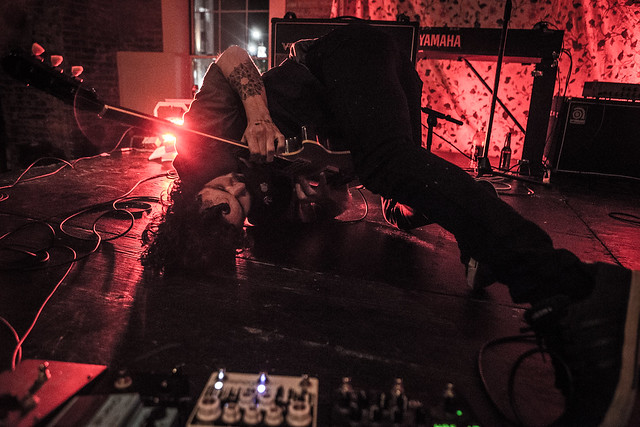 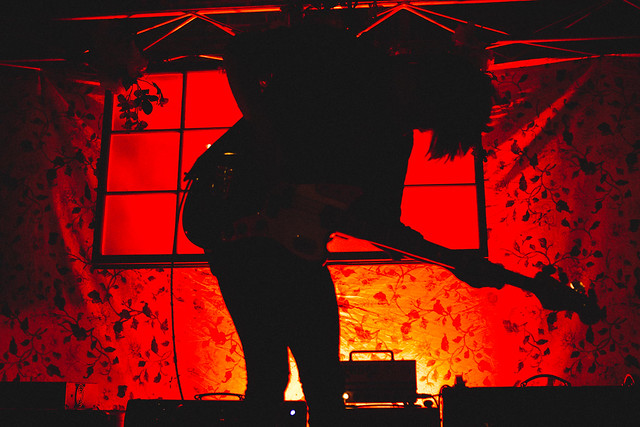 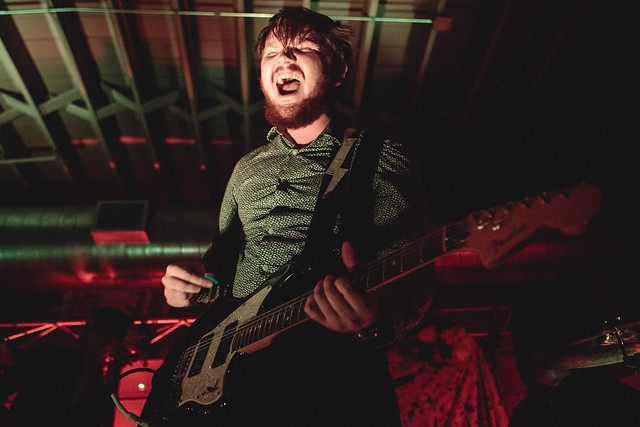 Then guitarist/vocalist Sam Costello led The Ambulanters onstage. He joked that the crowd might as well stay around after being at Chez Hay for the past three and a half hours. He then thanked everyone and so did guitarist/vocalist Jim Rhian before beginning their set. Bassist Robert Specht, playing his third of the night, finally took his vest off. The Ambulanters played their EP, a moody and fluctuating set of songs varying from compelling instrumental tracks to screamed, rhaspy lyrics about “lover boys.” The latter was from a new song called “Lover Boy,” which already hints at more new material in the future.

The band started to wind down with penultimate track, “Storm,” a moody instrumental track that ebbed and flowed from somber to chaotic. When The Ambulanters blew threw it the crowd chanted for more. Having spilled out their hearts — and catalogue — they simply couldn’t oblige. 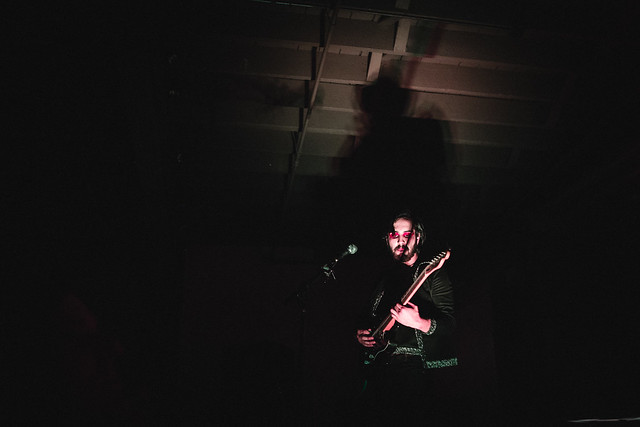 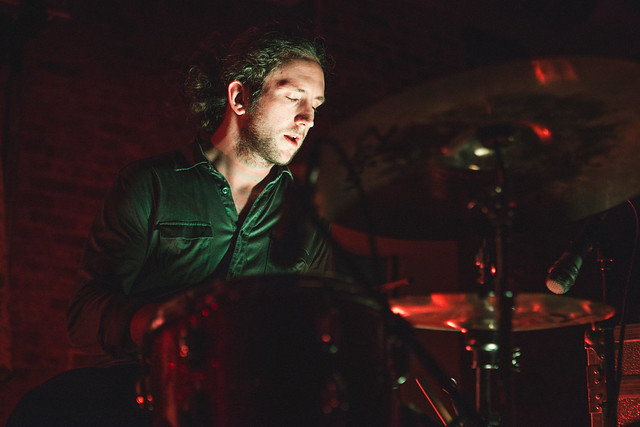 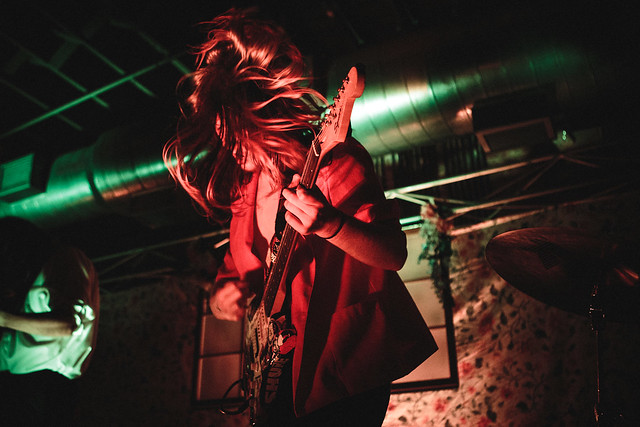 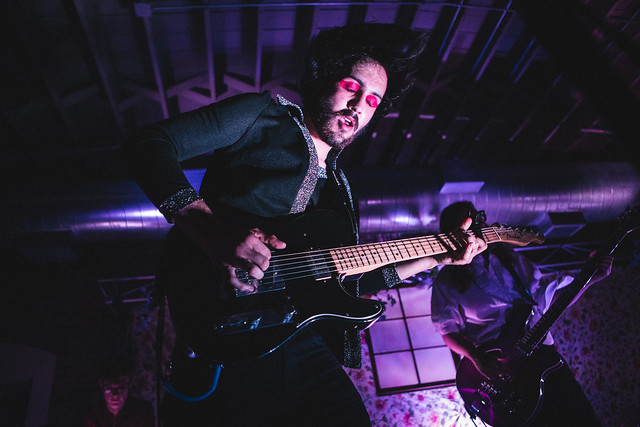 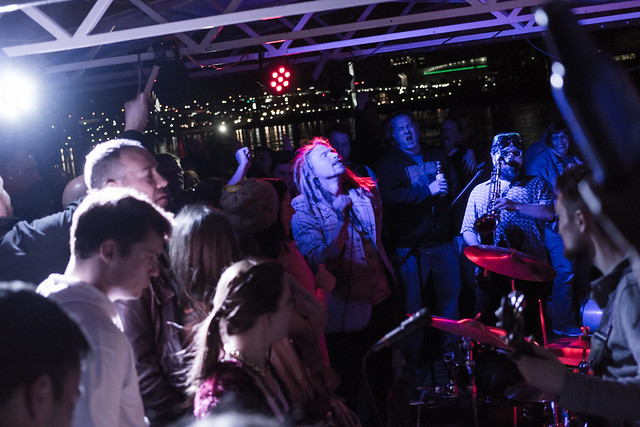 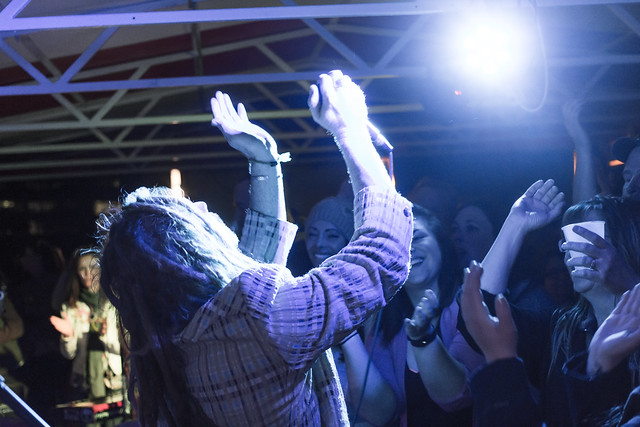 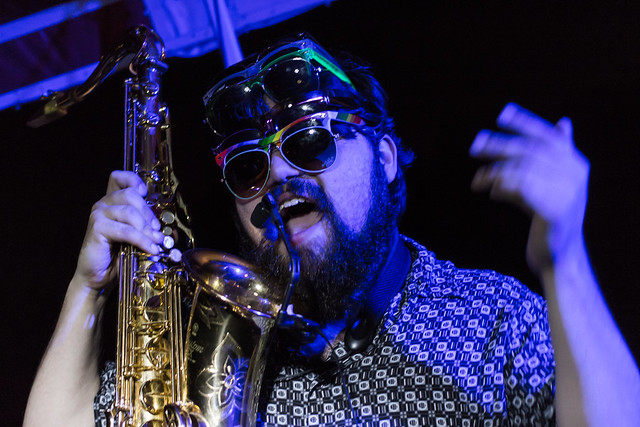 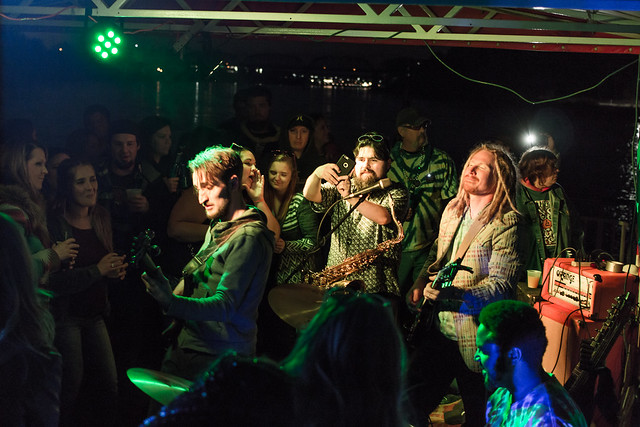 It’s Monday, which means a fresh HN Radio playlist at the top of the site. This week, we roll with loads of new music, including tracks from releases by Jack Hotel, The Electroliners, Justin Carter and The Ambulanters, as well as the first single from Kait Berreckman’s forthcoming full-length album.

We also received submissions from Lincoln folk troubadour Orion Walsh and Omaha rock trio The Regulation. Walsh returned to the states from an extended European trip last fall, and seems to be settling back into Lincoln for the time being. “Planes, Trains and Automobiles” is another ode to his travels, though this one confesses to the exhaustion and necessary recharge in the wake of such globetrotting. The track will appear on Walsh’s seventh full-length album, which drops later this fall. Catch Walsh May 26 at The Down Under Lounge and May 27 at Lincoln’s Cottonwood.

The Regulation comprises former Artillery Funk members Mitch Jordan and Jonah Aney, with the addition of bassist Nate Mahlberg. Their submission, “Patience/Conflict,” previews the band’s forthcoming EP, due out mid-to-late summer. The trio plays The Down Under Lounge June 3 with Ledicious.

Tune in to 89.3 KZUM tonight at 8 p.m. (or stream live at kzum.org) for Hear Nebraska FM, our two-hour radio show devoted to Nebraska music. Tell us what (radio friendly) songs you want to hear in the comments, or shoot us an email at news@hearnebraska.org.

Tonight, Titus Andronicus returns to Nebraska, plays Vega, 350 Canopy Street. The New Jersey indie rock band was just in Omaha earlier this year, on tour with The Hold Steady’s Craig Finn in support of the band’s 2015 LP The Most Lamentable Tragedy. Get ready for the band’s Lincoln debut with this Lincoln Journal-Star interview by L Kent Wolgamott. Los Angeles punk duo La Sera opens the show, on tour with Titus Andronicus for the rest of the month. Of note, the duo meets The Good Life in Seattle Sunday, May 29. RSVP to tonight’s show here.

Also tonight, Brooklyn indie pop band Lucius comes to The Waiting Room, 6212 Maple St, on tour in support of March 2016 sophomore release Good Grief. The band is perhaps best known for its 2013 single “Turn It Around,” but has been receiving heaps of praise and festival-circuit hype in the years since. Los Angeles quartet Happy Hollows opens the show. Tickets are $16, RSVP here.

And also in Omaha, A Giant Dog plays Milk Run, 1907 Leavenworth St. The Austin, Texas quintet is a ball of energy onstage, led by frontwoman Sabrina Ellis’s flashy, Iggy-Pop-like stage presence and bolstered by a raucous band behind her. The band releases its third album and Merge Records debut Pile on May 6. Minneapolis-based band Kitten Forever opens the show with Omaha acts No Thanks and Worried Mothers. RSVP here.

For a full listing of this week’s shows, head to our statewide calendar here. If you do not see your show or one you plan to attend, tell us in the comments, add yourself here or email us at news@hearnebraska.org. Use that same email for all news tips, story ideas and song submissions.