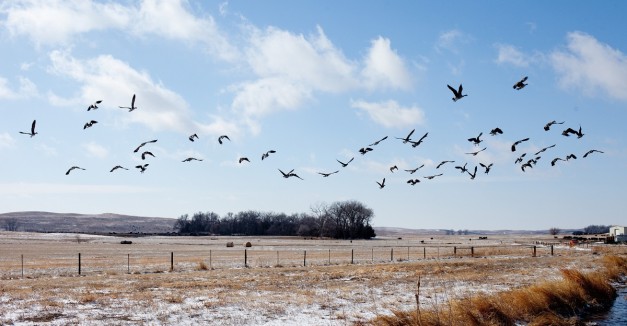 [Editor’s Note: Hear Nebraska staff writer Jacob Zlomke spent a month in Valentine, Neb., this summer working on the multimedia project Fly Over Me. Surrounded by the Sandhills and vistas that populate Kill County’s music, he wrote this column.]

I don’t remember my first time seeing Brownlee Road or its near-forgotten namesake community, which slowly returns to sand just south of the road, a few miles from where it meets U.S. Highway 83 on its eastern end.

I know I must have been young, in my father’s Chevy pick-up, taking a detour on our road from Broken Bow to Merritt Reservoir on Nebraska Highway 97. The highway is tethered to 83 by way of a few spur roads cutting laterally through Cherry County’s sandhills and springs.

Turn north from NE Highway 2 onto 83, then after about 20 miles, west onto Brownlee Road. A few miles in, Brownlee rests among meadows in a broad valley carved by the meandering North Loup River, among mounting, grass-anchored sand dunes. The low land sits over a high water table. Permanent and temporary spring-fed lakes help grow colorful wildflowers and grasses red and green in wet summers, all loosely rooted in the sand.

Through fall, winter, most of spring, as well as drought years — which are frequent in the arid, rain-shadow climate — flora is as brown as the sands that build the land.

To hear the narrator on Kill County’s track “Brownlee” from 2013’s Dust in Wire, “this land ain’t dyin’, but she’s a little tired of the times of tryin’ to lay her low.” To look for yourself, the land seems to be doing OK for what was once considered a useless desert.

The Sandhills may very well be irreclaimable. In the late 1800s, and bolstered by 1904’s Kincaid Act and others like it, many settlers flocked to the Brownlee area in search of land on which to cultivate life, both personal and agricultural — to little avail.

Drive Highway 83 the 60 miles from Thedford to Valentine today and you’re hard-pressed to see more than a few fields of corn, alfalfa or soybeans, and those made hearty by relatively modern central pivot irrigation systems, among seemingly endless miles of grassy hills, sectioned by barbed wire fence and littered with cattle.

Probably not many people alive today remember a time when Brownlee and so many towns like it littered across the Sandhills weren’t shrinking and disappearing.

A short list of towns in and around Cherry County alone that are either vanished, unincorporated, or very near it: Arabia, Brownlee, Crookston, De Witty, Halsey, Kilgore, Nenzel, Seneca, Sparks, Wood Lake.

Communities grow sparser and dry up. The Sandhills persist.

It’s the sand, the agricultural uselessness of the desert soil, that has saved the land. Without the patchwork farming of ground further east, fragmentation hasn’t taken much hold here, allowing vast swaths of land to grow largely unimpeded. The land acts as its own preservation tool against interference from human factors and, incidentally, the Sandhills stand as the most intricate wetland ecosystem in the United States. The World Wildlife Federation estimates that 85 percent of the Sandhills is still intact. The meadows are ruled by native plant life, migratory birds, pheasant, turkey, deer and more.

The Sandhills have not totally forsaken the people that settle here. Cattle are ranched on an impressive scale by families as old as Brownlee. A gloss of the town’s history lists names as familiar in Cherry County today as prayers for rain: Lee, Higgins, Eatinger, to name a few, still operate family ranches, often on the same land claimed by forebears.

In 1929, Mari Sandoz began work on a lengthy account of her father’s life as a Sandhills pioneer, Old Jules. Originally published in 1935, the book tells the story of Jules Sandoz, a hardworking man as cruel as the land he was determined to settle. Other settlers that populate the book come and go as easy as summer thunderstorms, drying up and blowing away. But Jules remained, bent on taking some kind of root.

Caleb Miles, who works on his father Craig’s ranch and plans to inherit the operation someday, is the fourth generation on the Miles ranch.

“It takes planning ahead, sometime just to the winter, sometimes years,” he says. 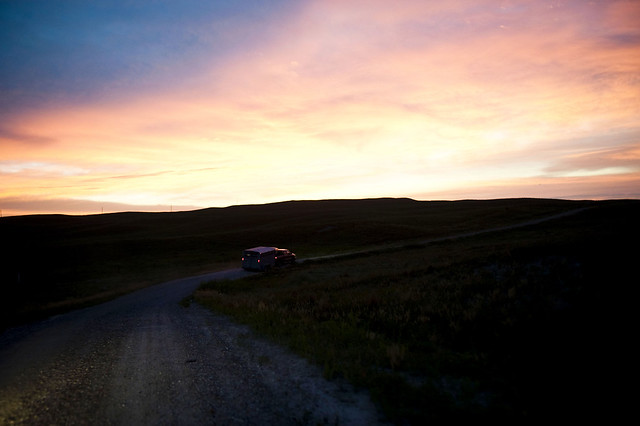 “It ain’t much but hard hearts and sand and such,” goes the Kill County track.

Over time, ranches consolidate, towns, like Brownlee, which once supported three general goods stores and a hotel, are reduced to a small church, a community center and a house or two.

Cherry County’s population density is at 1/sq mile, too sparse, too far-flung to support more than one city — Valentine. The other 10 communities are either villages or unincorporated. The largest, Cody, has a population of 154 to Valentine’s 2800. Cody’s motto: “Too tough to die.” Hard hearts, indeed.

In the final mournful refrain of “Brownlee,” Josh James sings, “if you pray, pray alone. You’ll be the only one,” before a beaten-down banjo riff carries the song to its lamenting close.

The song’s narrator claims the land is the tired of the trying times wearing her down. But if anything is doing the trying, it’s the people that live on it. Community buildings sit unused and falling apart, “storefronts bowed and broken.” 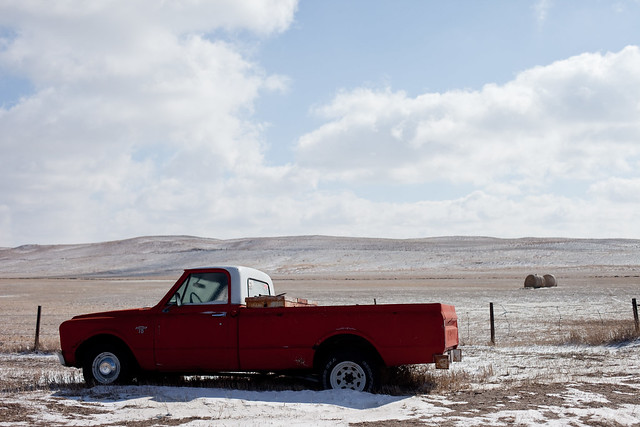 There’s a church service in Brownlee every Sunday evening to about 20 ranchers and their families. Some drive for over an hour to attend. The pastor drives north on Highway 83 from North Platte, nearly 100 miles, to deliver a sermon each week.

Ranchers rely on the land’s good health, making them environmentalists by trade. The fact that the two forces have reached anything near a symbiotic relationship should be considered a great victory on nature’s part. But there’s nothing for the narrator other than this hard land, cut by rivers that “lead somewhere, but it don’t matter much where.”

He doesn’t prefer the south, nor the coasts. Cities aren’t for him. Brownlee is home, even if it’s “just grey dust and bones, red rust and headstones.” He’ll take the sand, the river. He’ll give his heart to the grasslands. “These roots run deeper than you know.”

The narrator tells his audience that their grandfather came to the place first to make a home. To abandon would be to throw that work away. And so the land will grind him down in time, “but it’s alright, every day turns to night.”

In that, Kill County got it right. Unforgiving land takes hearty, stubborn people to live it. You can see it in cracked hands, split fingernails and creased faces, in wooden fence posts driven deep into the sand and strung tight with rusted barbed wire.

For better or worse, an ancestor made home here and you haven’t yet been part of the population’s disappearing act and you don’t know anything but wind, sand, rain and grass.

“Brownlee” is the song of a man who knows what he knows, dried up towns and struggling to turn those roots into something sustainable. It’s a strange kind of necessitated love. The thought of change, migration, doesn’t cross his mind.

He’s never even considered where the river might lead.