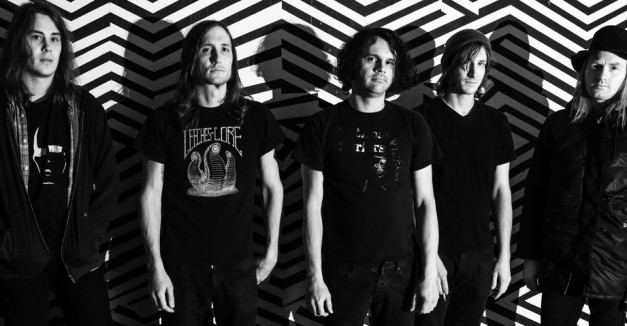 Digital Leather is back at it again.

While WHACK JAM is unmistakably a Digital Leather product, it diverts from the pseudo-poppy, siren synth attack of its predecessor into decidedly more industrial territory. The album sludges through 11 tracks of burning keyboards, blown guitar speakers and Foree’s trademark drone. Breaks from the machine are strewn through the record, including a fuzzy acoustic ballad in “No Color” and the pulsating ‘80s club mix “Morsels.”

Hear WHACK JAM below. It is available for purchase via Bandcamp.

Desaparecidos dies for the cause in new music video

First, Ian McElroy is drowned as a witch. Then goes Landon Hedges, crushed by a tea crate in Boston Harbor. By the end of Desaparecidos’ new “Golden Parachutes” video, we’ve been through Kent State massacre and Occupy Wall Street, and each member has been silenced for protesting.

The video, released yesterday, features cartoon depictions of the Omaha-based punk band, as well as guest vocalist Laura Jane Grace of Against Me! (who meets her own fiery end). Luke and Joe McGary of Fantastic Heat Brothers directed and illustrated the clip.

The Nebraska Tourism Commission is making the state’s music industry a focus in 2016, calling on concert venues, instrument shops and record stores to join its Nebraska Passport program.

The program features 80 stops throughout the state of Nebraska each year, organizing each stop into 10 themed tours that cover restaurants, recreation, history and more. It’s goal, aligning with NTC’s mission, is to highlight the state’s dynamic and diverse travel industry and to create awareness of what it has to offer. More than 20,000 travelers participate in the program each year.

Applications for the 2016 Nebraska Passport program are currently open, and due Tuesday, Dec. 15. Fill one out here. Below are a few guidelines, per NTC Tourism Development Consultant Amanda Barker:

Carlisle is currently working on a new album and corresponding visual EP, slated for next year. For now, dig in to “Dance Alone”:

Tonight, Nikki Lane plays Vega with Clear Plastic Masks. The Nashville singer/songwriter teamed with The Black Keys’ Dan Auerbach for her sophomore album All Or Nothin’, which dropped May 2014 on New West Records. Paste originally awarded the record 8.5 out of 10, saying its songs “read like Polaroids from a wild heart gone ragged.” Clear Plastic Masks is also Nashville based, blending soul and blues with older garage rock influences. RSVP to the show here.