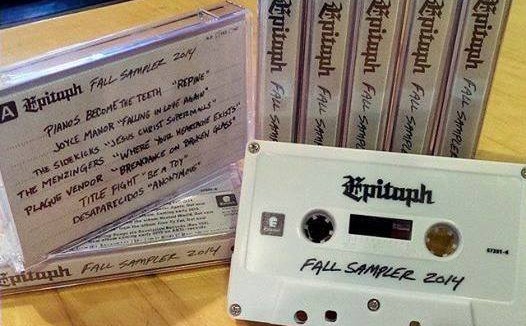 Rumors of Desaparecidos signing with Epitaph Records — one of the nation’s largest independent labels — were perhaps further validated over the weekend. A post on the band’s Facebook page shows a photo of Epitaph’s fall 2014 sampler, including tracks by Joyce Manor, The Menzingers and, of course, “Anonymous” by Desaparecidos.

Desaparecidos released Read Music/Speak Spanish in 2002 on Saddle Creek and haven’t had a substantial release since. The Conor Oberst-fronted punk band toured with Jimmy Eat World and the Promise Ring before parting ways. Oberst focused on Bright Eyes work, going on to release Lifted or the Story is in the Soil, Keep Your Ear to the Ground later that same year. Guitarist Landon Hedges formed Little Brazil shortly after Read Music/Speak Spanish.

The band briefly reunited in 2010 for Concert for Equality in Omaha. In 2012, the band headlined Maha music festival and played a few shows around the country with Joyce Manor.

Now it’s looking like we’ll get new material from the band soon and we won’t have to wait eight years between shows. Oberst recently alluded to a new Desa LP slated for sometime in 2015.

Omaha electronic duo Routine Escorts announced a follow-up to Grown-Ups, last year’s EP from the group. Jonathan Tvrdik and Thomas Flaherty have been producing grooving electro-pop under the Routine Escorts moniker for two years. Good Lies is slated for a late September release.

We’ve got “Desert Swagger,” a brand new Bus Gas song from their forthcoming LP, “Plastic People” from Red Cities’ brand new record, released over the weekend, “Underworld” by Saturn Moth from their record to be released Saturday night at The Waiting Room.

You can stream two tracks from Matt Cox’s performance on Hear Nebraska FM last week, and speaking of HNFM, we’ve got “Don’t You Remember” from Dominique Morgan streaming and we’ll have him in the studio tonight for an on-air performance. Tune-in at 89.3 FM in Lincoln or stream online at kzum.org.

If you’ve got any tips, announcements, what-have-you, leave them in the comments.