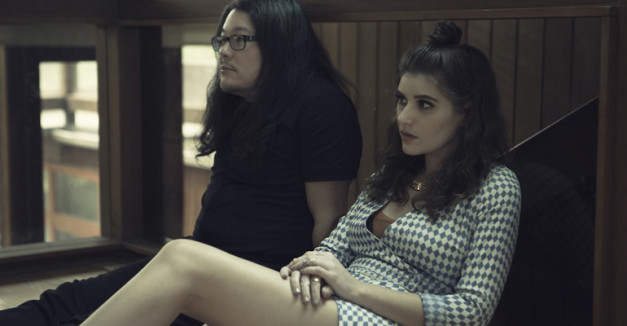 Less than a month away from releasing its first album in a decade, Desaparecidos has debuted yet another track.

Yesterday, the band released “The Left Is Right,” the third taste of forthcoming LP Payola before it drops June 23. Frontman Conor Oberst screams of protests and wealth reorganization on the hard-driving punk track.

Desaparecidos indicated via Facebook on Sunday that fans should expect more tracks from the new album this week, so we’ll if more come. Two others, “City On The Hill” and “Backsell,” have already been released.

After a pair of Brooklyn shows in June, the band will strike out on tour in mid-July. With no Nebraska dates scheduled, residents interested in seeing them might consider the July 17 date in St. Louis with Digital Leather, or Riot Fest stops in Denver (Aug. 29) or Chicago (Sept. 12).

Hear “The Left Is Right” below:

In the midst of a big 2015 that has included a full-length album and touring with Cursive, Twinsmith has announced another round of late-July tour dates.

It starts July 18 in Ogallala, the second stop on HN’s Good Living Tour, before the band heads back toward Iowa. They join Reptar for dates in Indiana, Ohio and Missouri. Reptar, for those unfamiliar, is an Athens-based indie rock band, but its frontman, Graham Ulicny, lives in Omaha. Reptar’s second record, Lurid Glow, came out on Joyful Noise this spring, and our editorial staff loves it:

Back on Twinsmith, last week the band played the inaugural No Coast Fest, which you can read a review of here. See the list of fresh tour dates below.

If you’ve been sitting on that short story or personal narrative, a new Omaha publication may have a place for it.

Literary magazine Lorem Ipsum is now looking for submissions for its first edition. Editors Daniel Mark, Brian Scandariato and Nicholas Dolezal seek to provide a platform for writers of varying styles, showcasing the talent and progression of the Midwest.

Literary magazines don’t fall seamlessly within the scope of our coverage, but this particular mission resonated with our organization, for obvious reasons:

“In a sense, we want to show the multi-faceted state of the Midwest,” Mark says via email. “One that is evolving from the idyllic prairie stereotype, that can be both a burden and inspiration, into the contemporary age.”

Submissions to the magazine are due July 4, and must be original, unpublished works. For more information, visit Lorem Ipsum’s website here.

In shows tonight, Best Coast visits The Waiting Room with Unknown Mortal Orchestra, Bully and J Fernandez. Tickets are $20. RSVP here. The duo of Bethany Cosentino and Bobb Bruno released its third studio album, California Nights, May 5 of this year, another entry into its ‘60s lo-fi and surf rock inspired catalogue. The title of the record is a reference to the hours at which Cosentino, a noted insomniac, reaches her creative peak. Psychedelic rock band Unknown Mortal Orchestra just released its own third studio album, Multi-Love, May 26 on Jagjaguwar Records.

In Lincoln, Mike Mains & the Branches plays Vega with Briner. Tickets are $8. RSVP here. The Michigan-based indie pop group was formed by Mains in Texas in 2009, and has since released a pair of EPs and full-length albums. Their most recent, Calm Down, Everything Is Fine, was recorded with producer Matt Hoopes of Reliant K, and was released February 2014.

For a full listing of shows, check out our events page here. As always, if you do not see your show or one you plan to attend, email us at news@hearnebraska.org.