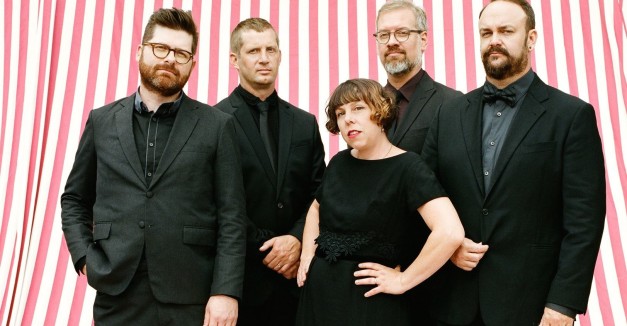 Announced today, The Decemberists will play Sumtur Amphitheater on May 29. RSVP here. Tickets are $35 and go on sale Friday.

The Portland folk rock band was last in Nebraska in 2011 for a show at the Holland Center. Its most recent and 7th studio album What A Terrible World, What A Beautiful World was released last month to generally positive reviews.

Before Freakabout heads out on a March tour, the Lincoln rock band is making itself more available to online audiences.

With Don’t We All out on March 7, Freakabout released a lyric video yesterday for “Never Have I Ever,” illustrated by local artist Quentin Orr.

“We’re mostly pumped about this record because everything about it was created locally,” says vocalist Cortney Kirby. “It was really cool to to work with people in the area and to see how much talent remains in Nebraska. There’s really no need to hire out or to do things in cities like New York or Los Angeles.”

Don’t We All was recorded in Lincoln at Fuse with Matty Sanders. Doug Van Sloun of Focus Mastering mastered the record. Lincoln Photographer Shannon Claire created the album art.

See the band’s upcoming tour dates here and preorder Don’t We All here.

Sofar Sounds has crowded each one of its intimate, alternative-space shows so far and, unless you’ve been to one, it can be hard to imagine what those shows might be like.

A new video is here from the first monthly showcase, featuring Burkum Boys, a trio of the Burkum brothers, two of whom also play in Omaha’s Skypiper. At this show, the audience appears tight-packed, the atmosphere attentive and cozy.

Sofar (Sounds from a Room) is an international company that hosts secret shows at alternative spaces (like living rooms, basements) in host cities. Omaha became one of the newest Sofar cities late last year. Hopeful attendees register with Sofar Omaha and are told day-of each show where it will be and who will play.

Lincoln cellist Justin Lepard reached out to Hear Nebraska about a performance tonight in a genre we admittedly miss in our coverage. The instrumental show is at 7:30 p.m. at St. Mark’s on the Campus.

Lepard says local musicians will perform original music composed by Kurt Knecht and Nels Drue Daily, both composition faculty at University of Nebraska-Lincoln. Knecht will also play tonight. Lepard says the music is all either being premiered tonight or new to Nebraska.

He says one of Knecht’s pieces is influenced by Spanish and jazz music. Lepard and Knecht will conclude the night with improvised jazz.