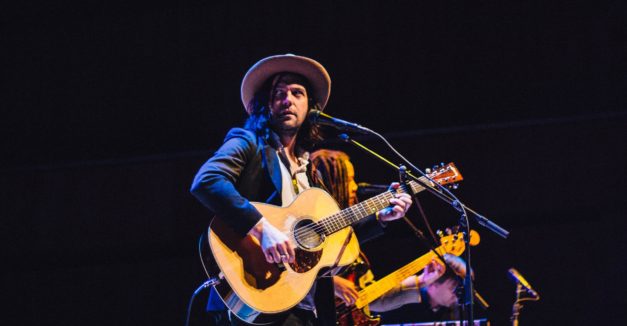 The Omaha singer/songwriter will play a free, full-band concert in Grand Island Thursday, Aug 18, presented by Hear Nebraska and local company Knife & Fork Productions. The concert takes place at 309 N Pine St (at the corner of N Pine and E South Front St) and openers will be announced in two weeks.

The concert will serve as a de facto warm-up before Oberst heads to Rocky Mountain Folk Festival in Lyons, Colo. on Saturday, Aug. 20. Grand Island seems a fitting spot to do so, given the well-attended Hear Grand Island series and Good Living Tour concert this past Saturday (both Hear Nebraska productions).

Plus, it’s pretty neat to look at announcements in Pitchfork and the like and see Grand Island at the top, Oberst’s sole Nebraska stop. We cannot remember the last time he played west of Lincoln in his home state (comment if you know when).

While the show is free, please RSVP using the Event Brite link here.

A month later, Oberst tours throughout the southwest before finishing the year with a few solo shows. See the full schedule below.

Recent events have troubled Heather Tedesco. First, pop singer Kesha’s sexual assault claims against Lukasz “Dr. Luke” Gottwald were thrown out, after the producer allegedly drugged and sexually assaulted her. Then came the Stanford rape case, in which student Brock Turner was convicted of sexually assaulting an unconscious women, only to be sentenced for three months jail time of maximum 14 years in prison. It was all starting to add up.

“I had such a physical response to the Stanford case,” says the three-and-a-half year manager of The Sydney. “I posted to Facebook that I wanted to do a [fundraiser] event. People came out of the woodwork that wanted to help and be a part of it.”

A handful of local musicians, DJs and artists come together Friday at the Benson music venue for a fundraising event entitled “Fuck The Patriarchy.” Proceeds from the $5 cover and “wishlist donation” will go directly to Heartland Family Service Domestic Violence Shelter and Planned Parenthood of the Heartland.

Tedesco says she was moved to create this event (with help from E3 Music Management) because sexual assault is an issue close to her heart. She says she wanted to create awareness of rape culture and its harmful effects on women.

“Working in the bar so long, I’ve seen it so many times,” Tedesco says. “The justification that people have [for rape]. It’s overrun in today’s society. This is the first event that I feel like I’m putting my heart out there for everyone.”

The event starts at 5 p.m. with a silent art auction, followed by spoken word from Olivia Johnson at 7 p.m. Then music all night long until 1 a.m., when DJ Matt Bowen will spin a dance party playlist filled with tracks by artists who have survived sexual assault.

Entry to the event is $5 or by “wishlist donation” (find a full list of needed items here). There will also be drink specials and raffle drawings all evening. RSVP here.

Review: Half Waif, SPORTS, and Pinegrove at Milk Run

It was a solid 25 degrees cooler outside Milk Run then it was inside, and much less humid. That’s saying something when it is July in Nebraska.

But then, hardly anyone was outside in the enclosed patio or hanging around Leavenworth street. Instead, they were packed — and really closely so — into Milk Run’s small DIY space to see the East Coast touring trio of Half Waif, SPORTS and Pinegrove play an energetic, conversational, sweaty, and captivating night of diverse and powerful music.

Half Waif was first to take the stage. The main project of Pinegrove member Nandi Rose Plunkett, Half Waif is an art-pop trio hailing from Brooklyn and specializing in melodic, wandering electronic tunes (you can read about more about them here). During Half Waif’s 32 minute set, Plunkett, joined by fellow Pinegrove members Zack Levine and Adan Carlo, explored the relationship between live performance and electronic music expertly, creating wafting and dreamy electronic harmonies from Plunkett’s keyboard tempered by a strong backbeat and snappy snare drum from Levine. Genre almost seemed irrelevant in the light of complete, orchestral sound coming from the small ensemble. It was remarkable, as every song swelled and twisted like a throbbing vein and pumped over the audience in waves of harmonies, to see thay only three musicians were creating the all of the sounds. Plunkett’s voice and clearly classically-trained piano work blended well with Carlo’s smooth and melodic bass playing and Levine’s adaptive drum and drum pad work. The trio conveyed an absolute weight and drama in every beat that was left the listeners attentive and enthralled.

SPORTS, a young Philadelphia-area garage rock band, was next to take the stage. SPORTS was a distinctive contrast to its predecessor, during its own half-hour set. As they took the stage, they timidly sound checked, quietly talking to one another in a distinctly reserved fashion. All of the perceived shyness and pusillanimous talk went right out of the window the second front-women and lead-singer Carmen Perry strummed her blue Fender Stratocaster. The set was a case study in hard garage emo, featuring primordial 90s pop punk song structures forged into modern angsty, loud, fervent rock and roll. The drums were fast, loud, and snappy, not afraid to create beats focused on thumping toms and splashy cymbals; the fuzz of the rhythm guitar was perfect for the thrashing guitar choruses, while the lead was a timeless distorted Telecaster twang. SPORTS delivered a youthful energy in their music that was reflected in the emphatic head-bobbing from the equally young and energetic audience.

Pinegrove was last to take the stage in front of a completely packed house. After a lengthy impromptu, unscheduled soundcheck — during which frontman Evan Stevens Hall told knock-knock jokes and enthusiastically counted from zero to ten — the sweat-drenched crowd was rewarded with a no-holds barred, 30-minute set. It was hot — Hall noted that he was so sweaty he “could tobogan around anywhere he wanted” — but Pinegroves’ compact vocal harmonies from Plunkett and Hall gave their music a chilled, indie-rock taste that made the heat bearable. Pinegrove put on full display it’s orchestral-esque alternative rock writing, its performance marked by a level of dynamic contrast and changing tempos. Their songs were all diverse in this sense, as they weaved across a lot of complex musical ideas expertly, creating an amalgamation of interesting lyrical, harmonic and melodic motifs. They pivoted between these ideas on a dime, as if every member shared a single brainstem, and the result was a very emotive, ever-changing, cohesive performance. Pinegrove wrapped up its performance a bit earlier than expected. Their last song, a riveting and impassioned rendition of “New Friends” from their newest album Cardinal, was the distilled essence of what made Pinegrove so endearing. It was energetic, with ringing guitars matched by ascending vocals from Hall and harmonies by Plunkett. The sound was dense and layered with harmonies and musical interplay across every sonic frequency. And perhaps most notable of all, a crowd toughing out sweat-lodge humidity and lingering heat, was delighted.