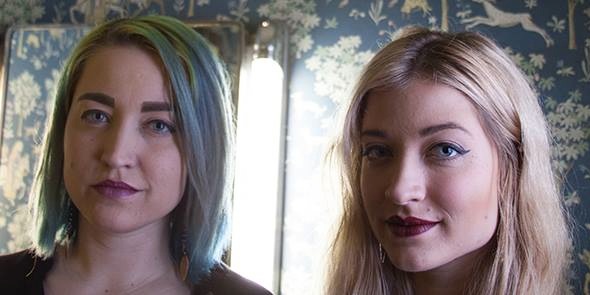 Concert Review: The Garden, The Shrinks, GUTS at O’Leaver’s

California art-punk twins Wyatt and Fletcher Shears sweat and shook with an intimate crowd Monday night at O’leaver’s. The duo plays as The Garden, a woozy and confusing onslaught of twacked out bass and machine-quick drumming.

Opener GUTS played its second show to a receptive crowd. The often-instrumental Omaha guitar and drum combo combines elements of emo with the Nirvana and Pixies style loud-quiet-loud dynamic.

Goth rockers The Shrinks came next, all members wearing all black, starting the set with washed out reversed vocals, letting the discomfort sift into the pores of the audience. The Omaha band sped through its set sounding like a coke-fueled horror movie car chase starting with a domestic dispute and ending with a mangled hearse, in a good way.

About 35 people stuck around to see the Garden, the floral-clad and earringed twin Yves St. Laurent models wilding out at their ultra fast pace.The brothers shifted between playing their instruments and half-rapping to industrial beats that sounded like the lurching of Soviet submarines on a mid-century Hollywood set.

While small, the crowd seemed to know every word, and nearly the whole set was marked by a pogoing audience shouting phrases into Wyatt’s hastily gifted microphone. Absurd and sarcastic lyrics are necessary tools to bring us into what the band calls the ‘Vadaverse,’ the parallel dimension where they reside. Lyrics like “I wanna be so much like that nose I saw on TV” and “I’m shapeshifting everywhere” get vaulted back towards the band with glee.

Yells for an encore quickly brought the pair back onstage, and they closed with fan favorite “I Am A Woman” and two hyperspeed renditions of a song where the only words are “Vada vada.” Thanking the crowd, they saluted repeatedly as fans surrounded them, full of praise.

A few out of state tours, an OEAA nomination and, now, a new EP all make for a great first half of 2016.

The Hottman Sisters announced the release of their EP This Two Friday, July 8 at Reverb Lounge. Walk By Sea and Miwi La Lupa open the show.

This is the first batch of studio recordings from the sisterly Omaha pop duo. Roughly more than a year old, they have since fleshed out their sound with drummer John Evans, who has added jazzy feel to their well-crafted pop songs.

The band has cut its teeth on four-day trips to California and Minnesota, as well as more than a handful of notable Omaha shows. Later this year, The Hottman Sisters will perform at New Generation Music Festival in Stinson Park (RSVP here) and for HN’s Good Living Tour stop in Red Cloud with Lloyd McCarter & the Honky Tonk Revival, Lester Junction and DJ Spence Love (RSVP here).

There are a pair of quick tours to announce, as Lincoln acts Orion Walsh and Salt Creek are both set to head out in the next couple of weeks.

Salt Creek — which comprises members of Lighthouses and No Tide — starts a weekend trip, mostly in DIY spaces, Thursday, June 23 at The Commons, with a trio of Minneapolis bands in Infinite Me, Wanderer and Casual. They head to that city and to Bismarck and Fargo, North Dakota, before finishing June 28 at Milk Run with Household, Tiger Wine and Super Ghost. See tour dates and event links below:

And it should come as a surprise to no one that Orion Walsh is ready to get back at it. The folk troubadour embarks on tour July 6, playing dates in Iowa, Indiana, Ohio, Chicago and Nashville. Walsh returned home from a European living room tour in Autumn last year, releasing Love Isn’t What You Would Expect shortly thereafter. He’ll mostly cover coffee shops, record stores and living rooms, in signature fashion, and will be joined by Arkansas singer/songwriter and frequent tour partner JM Lansdowne.

See all dates, including two in Lincoln, below:

(All dates with JM Lansdowne. For info about attending house shows email orionwalsh81@gmail.com)

Also tonight, Seattle indie rock songwriter David Bazan comes to Reverb Lounge, 6121 Military Ave. Long the frontman of indie band Pedro The Lion, Bazan has been recording and touring under his given name since 2006, releasing three full-length albums and a handful of singles/EPs over the past decade. His most recent effort, Blanco (Barsuk), “surprises by throwing this tattered voice over top synthesizer warbles and drum samples rather than brooding guitar — a cleaner, more lush take on the work he did in Headphones,” according to a Consequence of Sound review. Singer/songwriter Laura Gibson, who also released a record, Empire Builder, on Barsuk this year, opens the show. Tickets are $15, RSVP here.

And back in Lincoln, Jackie Allen Group plays night three of Jazz In June in the Sheldon Sculpture Garden. The jazz vocalist has cut 10 studio albums over her decorated playing career, and has recorded with “Chicago’s First Lady of Jazz” pianist/vocalist Judy Roberts. Allen’s 11th album Moon’s On The Rise is out this summer. Music starts at 7 p.m., and entry is by $10 suggested donation. Get more info here.

Check out our statewide calendar here for a fuller listing of shows tonight and for the rest of the week. If you do not see your show or one you plan to attend, leave it in the comments or add it yourself using our contribute page here.